From giggling behind hands at Full Monty, to full blown dribbling on laps at Magic Mike XXL, all-male entertainment shows have gone from seedy to actually sexy. No longer is it simply acceptable for someone resembling your neighbour’s hairy uncle to whip off their clothes at lightening speed, these cabaret shows are an art form with tantalising, teasing and body tricks that are almost inhuman. Forbidden Nights is one such show; billing itself as ‘a sexy circus’, one gay and one girl prepared themselves for two hours of fire-spinning, gyrating and a writhing tangle of oiled six packs and tree-trunk thighs.

This ain’t my first rodeo, folks and I’m torn between pride and shame in admitting that Forbidden Nights is my third male cabaret show. Taking place in the legendary Infernos, the event prefers to eschew the title ‘strip show’ instead working on cabaret. Semantics out of the way, this is two hours of chiseled men ripping the clothes clean off their bodies. Treated to FROW (thank-you press tickets), we are caught up in the hen-party frenzy of screams and bays for ‘take it off’ - the only thing for it? Shout even louder.

Over the course of the evening, a series of men dance and thrust to various songs; there’s cowboys, soldiers, a compere with a surprise hidden under his trousers and at one point a washing machine appears on stage. These men aren’t just six-packs; each of them also has a sizeable talent; from fire spinning through to breakdancing. Unlike other male dance shows, the gents in Forbidden Nights don't reveal all, instead dazzling the crowd with their skills such as a cyr wheel performer who almost seems to float through the air with acrobatic skill, or the dancer who swings from chains attached to the ceiling.

Let’s not beat around the bush, Forbidden Nights isn't your average night out; it’s wild, it’s downright fun and the boys are more than just pretty packages, performing jaw-dropping acts that require skill and hours of training, rather than just thrusting in your face. With a roster of skills that range from flying through the air on chains to whizzing fire around, the slow reveal of six packs is merely the cherry on the top of the show. My appreciation for the nude male form has been truly realised after two hours in Infernos, a sentence never heard before, I’m sure. 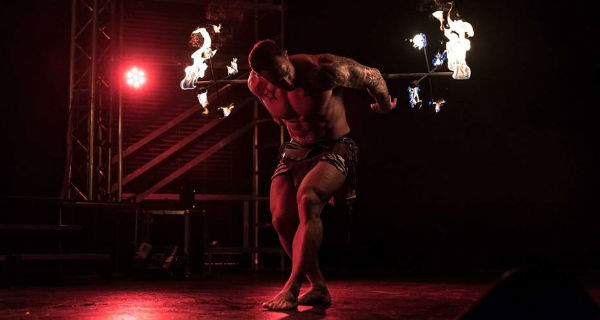 Fire-spinning is just one of the talents that the Forbidden Nights boys showcase.

Traditional male cabaret shows appeal to precisely two audiences: shouty hen parties and thirsty gay men, and being a card-carrying member of the latter group, I thought I should join my friend Faith on a trip to see some nearly-naked men. But when we found out Forbidden Nights isn't a traditional strip show, it's a full-on male cabaret complete with acrobats and dancers (and abs), we knew we needed to go see if the men of Forbidden Nights were a secret worth sharing or something better left in the closet.

From the moment these brave men walk on stage the room erupted into a roar of screams, and within minutes I was screaming too. Whether they were pretending to be firemen getting dramatically undressed after a hard day saving lives or putting their loads in the washing machine, the crowd goes wild, hungry for more abs, a flexing bicep – maybe a hint of bum. But it's not all about bodies at Forbidden Nights, as these guys have some serious skills. One of the lads descended from the ceiling and dancing amongst the chains, which sort of proved that those bulging muscles weren't just for show, and the fire-dancing was mesmerising.

It's all good fun and if you love abs, arms and pecs ripped straight from the pages of Men’s Health gyrating in front of you, as well as a few spectacular tricks, this might just be your little forbidden paradise. Just grab a glass of prosecco and get whooping. 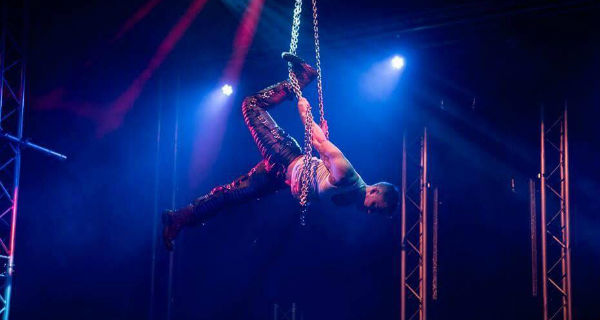 Forbidden Nights men break free from the shackles of being fully clothed at their weekly sexy circus.