Gone are the days when going to a vegetarian or vegan restaurant in London meant being choked with incense while sitting on bean bags and involuntarily eavesdropping on a conversation next to you about how someone “totally found themselves in the foothills of Kathmandu”. It’s fair to say that today, London is one of the vegan capitals of the world, with chic, fine-dining eateries – like the recently opened Essence in Shoreditch – redefining the modern vegan restaurant. Wildflower continues the tradition, and in a cool new community-run venue space in Peckham, it’s a welcome addition to the already thriving vegan scene.

If you’re a London local, chances are you’ve already trudged up the never-ending pink staircase on the top of a disused multi-storey carpark to get to the top of Frank’s, for a warm pint with the rest of London’s hipster community. Up until now, there hasn’t been anything occupying the lower floors – but that’s all changed.

Wildflower is a canteen-restaurant occupying a corner of the car park, it has partition walls and is separate from the rest of the space. Walking through the cavernous venue, a band is setting up, rows upon rows of benches seat people who’ve bought street food at one of the vendors inside (like Chinese at Hao Hao Chi and Kurdish at Nandine) – yoga classes are held open-plan rooms and there are even screen printing studios. It’s like a cool community centre you could spend all day at. 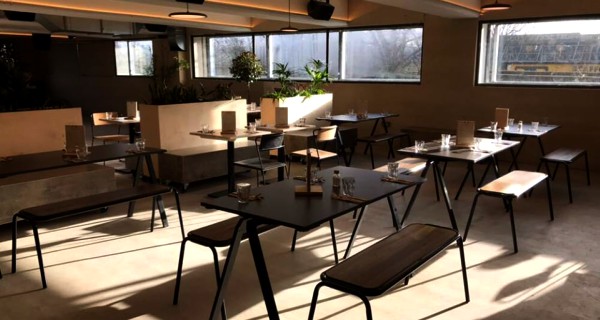 After some help navigating the menu (extra points for knowing what a Calcot is) we settled on five dishes to share between two. Although we were told that everything would come at different times, there was quite a gap between the first plate arriving (the fluffy caraway and goats cheese donut, £2 which comes with a sweet slick of rhubarb puree) and the last plate of smoked tofu in ssamjang sauce £11.50. Although all were delicious, it did mean I was pretty full and only managed a bite of the tofu by the time it arrived, which was the most expensive thing we ordered.

The standout was the calcots and romanesco with moscatel reduction £6.50, which are Catalan green onions and came with a tangy romesco bright-red sauce (as it’s traditionally served in Catalonia). The ingredients used are wide-ranging – you won’t find your average mushroom risotto on the menu here. All plates were inventive – with stripped-back tofu coming on a nutty Asian-inspired plate scattered with sesame seeds, crunchy bok choi and pickled carrot. 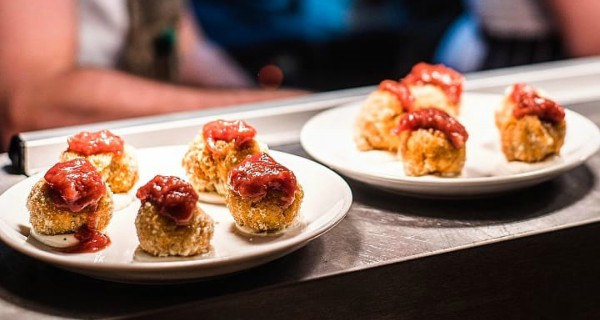 Caraway donuts with goats cheese were a firm favourite on the Wildflower menu.

Service is possibly a bit too laid-back at Wildflower – but then again, you are in a car park. Vegans and veggies will love the laidback vibe, innovative menu – and even the cocktails are vegan. It’s a great addition to the Peckham food scene, and I’ll be back to check out the rest of Peckham Levels.