A Magical Winter Forest Is Taking Over Broadgate Circle This Christmas 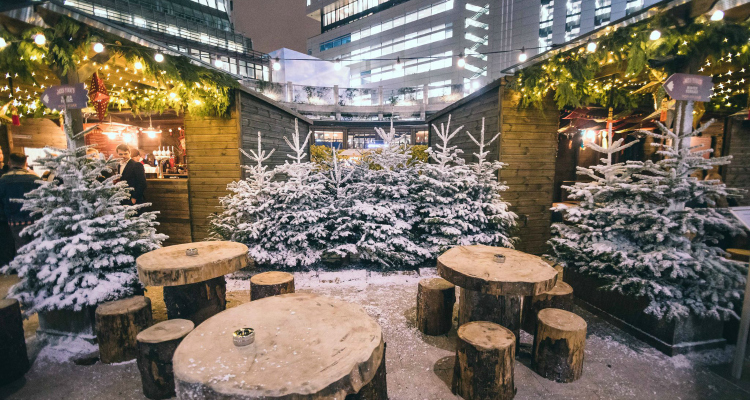 A little taste of the North Pole is arriving in Liverpool Street's Broadgate Circle this November and December.

Do you dream in candy canes and Christmas carols? Had your countdown on since June? Then the news that Broadgate Circle's The Winter Forest is back for 2019 is going to be like all your Christmases come at once. The Scandi-style pop-up will be open from Monday 4th November and will be bigger than ever following the launch of the new building in Finsbury Avenue Square. Bringing a taste of Lapland to the City, the pop-up will include hundreds of fairy lights, snow-covered fir trees and Alpine vibes from the wooden huts.

While details for this year's event have yet to be released, 2018 saw festive quiz nights, craft classes, carol singalongs, and a visit from Father Christmas himself. New vendors will be getting in on the action for 2019, with newly opened Bar Douro, Nyoke and Butter Scotch creating warming treats. Everyman Cinema - which is opening in the next week - is catering for your Crimbo film traditions, screening the likes of Frozen 2 and more.

The Winter Forest will be open at Broadgate Circle, London from Monday 4th November.

From Supermarket Swaps To Groceries, These London Restaurants Are Keeping You Stocked Up

Creative In Crisis: How UK Bars, Hotels And Restaurants Are Helping Support The NHS And Its Staff