This year I told myself that I'd step outside my comfort zone to explore London's eclectic dining scene... the same old sushi and repeated pasta spots can get old. Now, Filipino food? That piques my interest. Though beyond Mamasons’ epic dessert selection and office lunches spent tucking into seafood kinilaw at local spot Rapsa, my experience of the cuisine is disappointingly limited. So when the chance to try acclaimed chef Budgie Montoya’s latest pop-up surfaced, I nabbed it real quick. 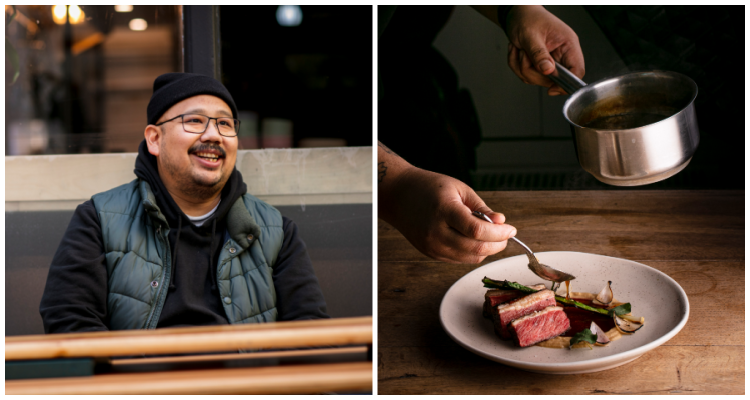 Sarap is the brainchild of chef Budgie Montoya.

Nestled on Heddon Street, just moments from Saville Row and Regent Street, Sarap occupies the same stretch that has provided a springboard to foodie favourite concepts like Manteca and Fallow. And though it may be sandwiched between Michelin-starred Sabor and Gordon Ramsay’s Heddon Street Kitchen, the vibe here is much more relaxed.

Walking into the low-lit restaurant, it was as if we’d been transported to Shoreditch by way of industrial décor, hanging pendant lights, an open kitchen and splatters of foliage. A giant bottle of Don Papa rum sat at the end of the bar, signalling that this spot might have a strong drinks list behind it. And I wasn’t wrong. My Pinya Spritz (£13) paired pineapple tepache, melon and sparkling wine for a mature, juicy mix, while my date’s foamy Kalbahan (£13) was a heady blend of mezcal, Aperol and passionfruit. 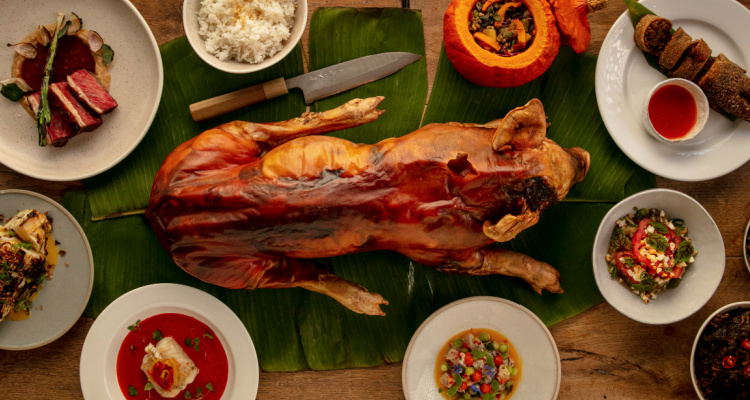 You won't want to miss the pig's trotters.

Filipino food isn’t something I’m too familiar with so I let our waitress take the lead. She knew the menu like the back of her hand, recommending we start with chicken skin and - of course - the pig's trotter, which is a staple of Montoya’s. The fried chicken skins (£4.50) were huge, crispy and flavoured with Sinigang salt which was offset by a sweet and sour dipping sauce… oddly satisfying. A must at Sarap, the Rellenong crispy pata (£13) saw pork scratching-like skin stuffed with moist Adobe rice, as it if were delicious pig sushi. My dining date - usually averse to anything offal - even went in for seconds.

In the few hours that we dined here, I came to realise that each dish would be a new surprise. Thick, plump, pink trout kinilaw (£12) was so tasty; citrusy, and fresh at the same time, with a gorgeous contrast of sweet coconut and tart rhubarb. Even the sides made our mouths water, with kale laing (£6) giving creamed spinach vibes, but with a nutty twist and smatterings of garlic, ginger and chilli. Words can’t even do this one justice. Aubergine (£7.50) was not at all what I was expecting, unlike any slant I’ve had before. Mushy and cold (which sounds grim, I know), it was a delightful plate enhanced by heritage tomatoes and duck egg. And with all that, we somehow managed to split the sirloin (£50 between two). It was matched with a soy and calamansi jus for a proper melt-in-the-mouth experience. 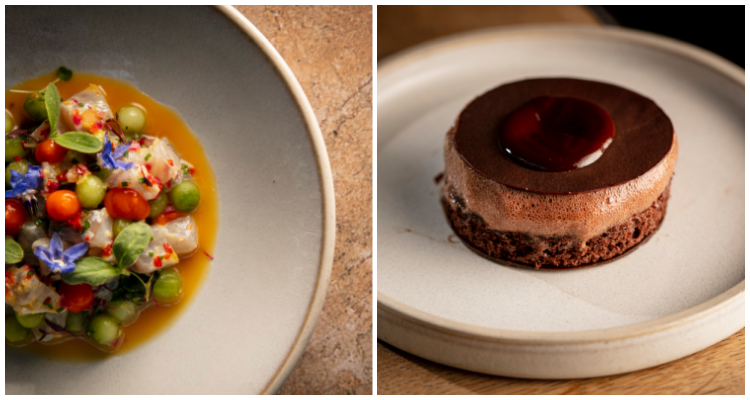 From kinilaw small plates to creative takes on classic desserts, the menu here pops off.

With just enough room for afters, I opted for a delicately balanced miso and banana old fashioned (£13) while my date ended the evening with a Don Papa-led Calamansi daiquiri (£13). Soaked up by the cassava basque cheesecake (£6.50); presented with a pool of buttery pandan resting on a dollop of Macapuno coconut cream, it rounded off a luscious meal.

Flying the flag for inventive dishes and authentic Filipino fare, Sarap should be on your list of restaurants to try. How could we fault cocktails bursting with flavour, dishes that kept us guessing and charming waiters who really know their stuff? With the announcement Montoya’s Brixton restaurant Sarap Baon sadly closing this month, there's even more reason to visit. Let’s hope we have a permanent fixture soon.

Discover more pop-up restaurants and sign up to our London newsletter for news straight to your inbox.