London's Fanciest Boat Party? We Went For Dinner On The Glass Room

The last time I was anywhere near Embankment was when the slow train from Devon pulled into Waterloo and I decided to walk (I know) along the river, taking in the big city sites of my new home. That was four years ago and, while I have many more wrinkles and a new belief that anyone who paces less than 5mph has been sent from Lucifer to test me, it’s still a spot that pulls on my weak heart strings. It’s along this gorgeous stretch, that Glass Room is moored, looking not unlike a whopping conservatory on a floating pontoon. 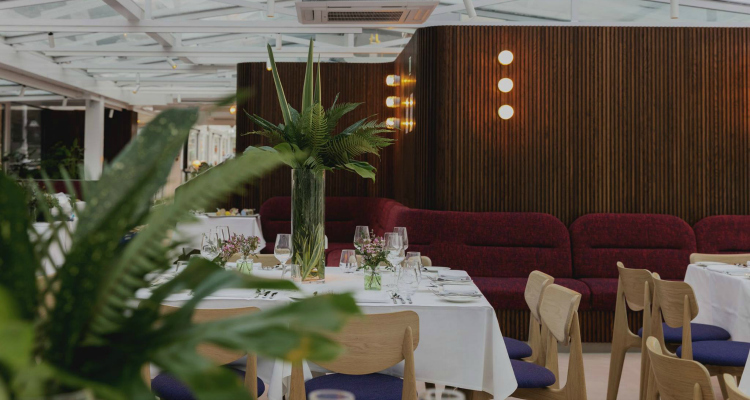 Interiors have been designed by Tom Dixon.

Inside, however, it’s a conservatory that British designer Tom Dixon has got his hands on, adding his ridiculously sexy touch with rich colours and nautical pieces. A royal blue bar with cabin windows greets us as we walk down the gangway; maroon banquette seating lines a wooden wall, and little mushroom-shaped lamps light our table, creating a glow that’s not so bright that it reflects off the floor-to-ceiling windows. It’s a distinct crowd of posher tourist groups, couples on a date night, and a father and son (who unfortunately for the latter, was seated next to us).

Setting sail at 7.30pm, Glass Room puts on the whole shebang over the course of nearly three hours. We gaze out of the window as a guy strums acoustic covers on the guitar, watching a party take place outside the Houses of Parliament. As the evening continues, we float past more landmarks, working our way through five British courses, including a tiny shot of spiced cauliflower veloute, topped with a miniscule bite of shallot crisps.

The Severn and Wye smoked salmon, while seemingly simple, was nonetheless delicious, with a celeriac that crunched against the fish. Alongside the cheerily charming waiters, a sommelier was on hand to recommend wines for each course, bringing out a variation of bubbles, white and red as we ate. By the time 10.15pm rolled around, everyone was a little wobbly (and not from other boats' wake), and out on the back deck, ooing and ahhing at the underside of London Bridge, while trying to get the perfect 'gram - if that doesn't warm your London heart, I don't know what will. 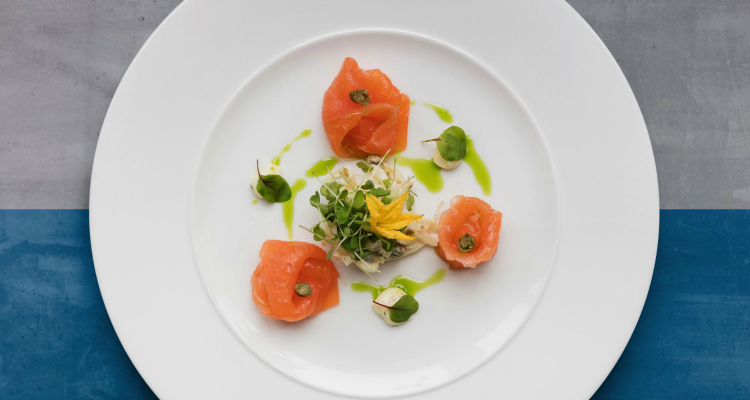 There's a choice of three to five courses on the Glass Room.

It seems that as soon as you get your Oyster Card, you are immediately banned from all London’s best bits. Trip on the London Eye? How old are you - 12? Plodding around the National History Museum - do you want to see a child cry? But being constantly cynical is hard, especially when experiences such as the Glass Room are just lovely. Yes, it’s pretty touristy, but let’s face it, you can’t really beat London from the water, especially when it’s accompanied by a fancy boat, attentive staff, and five courses of British favourites.

Glass Room sets sail from Embankment daily, with packages that range from five courses with half a bottle of wine (£109pp) to afternoon tea (£36pp).