The Theory of Colour at Fitz's Bar, an opulent hideaway nestled inside the Kimpton Fitzroy London, is offering up a whole new way of choosing your cocktail. Taking a mini UV flashlight to their immersive menu, you'll flick through different versions of 'Still Life of a Vase of Flowers' by Nicolaes van Verendael and uncover hidden messages along the way. From saturated versions to complimentary contrasts and abstracts using primary colours, each new image links to a certain drink, with flavours mirroring a variety of personalities or moods. As a sucker for a new experience (and swanky hotel watering holes), I couldn't help but head over to give it a go. 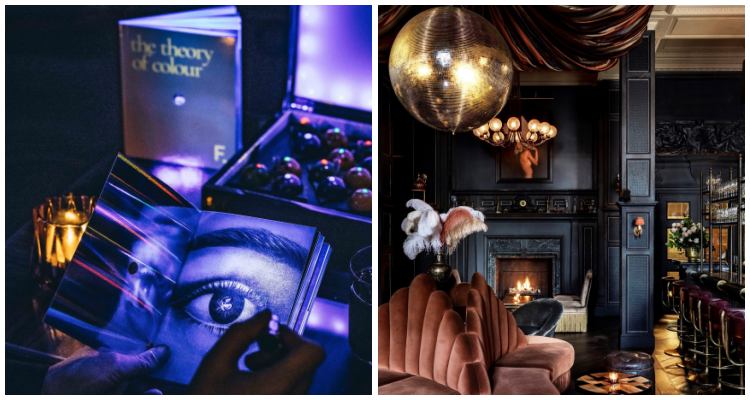 With moody, Gatsby-esque interiors and unique cocktails, Fitz's Bar is a hit.

On entering Fitz's Bar through the hotel lobby and a draped velvet curtain, I was blown away. A ceiling of billowing golden fabric gave way to moulding framed by dark panelled walls, while gallery walls dotted around the space featured an eclectic mix of chic sketches and the odd oil painting. At its centre, splaying ostrich feathers, an open fireplace, a glowing golden bar and raspberry scalloped sofas completed the look. Once the stunning interiors had set a luxurious ambience, we kicked off the drinks with 52 (£15), a refreshing mix of cantaloupe melon, yellow chartreuse, lemon, spearmint and champagne. The cocktail appeared on a totally white page - its ingredients and artwork only unearthed by torchlight - and made the perfect palate cleanser. A flying start.

Funnily enough, my friend's favourite choice was exactly what I expected her to be attracted to. Deep breath (£15) was flanked by an image of very subtle blush tints and a layer of acetate adding much of the colour, creating a calming achromatic lens. The theory and taste really were on the money here, resulting in a pure, gently aromatic tipple of apple, brandy, botanical gin and brown butter, with a hint of sage on the finish. Being unable to resist having a swig myself, I can honestly say I've never had a cocktail where the name better reflected the taste. 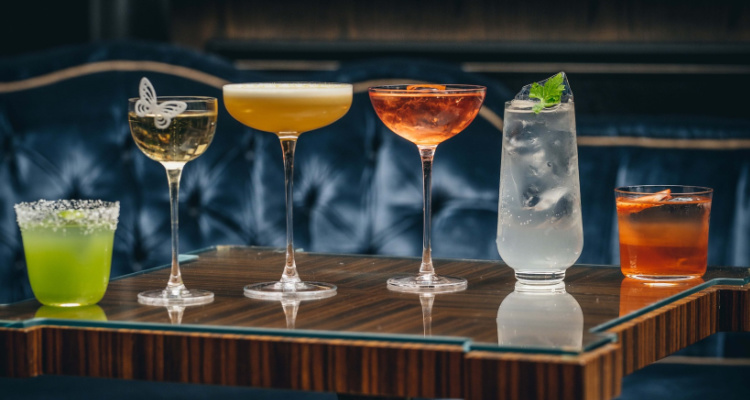 This interactive menu really nails it.

My top pick? Riley's eye (£15), a beauty whipped up from malt whisky, apricot and pistachio brandy, orange bitters, lemon and frothy egg white. While this wouldn't be my usual pick in terms of intensity, I tried to stick to the idea of what picture speaks to you the most; the tetradic and somewhat psychedelic swirls of three colours here definitely caught my eye. On the taste front, I was pleasantly surprised by the balanced, yet punchy, flavours, happily sipping away on the heady concoction. I might not yet be the maverick leader this drink is said to match, but the nod to my independent nature and adventurous mood on the night certainly was appreciated.

For food, we ordered the truffle, Parmesan and rosemary salt skinny fries (£6), which were a moreish hit, while skewered barbecue-glazed Torre Meadow beef (£9) also went down a treat. However, the tender oyster mushroom with truffle teriyaki glaze (£8), boasting a sweet yet smokey flavour that gave the illusion of meat, made the best dish here. Fronting a more extensive menu than most drinking dens, including tacos, tuna or steak tartare, and an oozing stack of profiteroles for dessert, Fitz's Bar is a place where you can really make a full meal of it - perfect for having creative cocktails all night long.

As a new way to pick your drinks, or simply something different from the norm, The Theory of Colour at Fitz's Bar is just the ticket. This interactive cocktail experience offers some of the most fun I've ever had when perusing a menu and ordering, with a one-of-a-kind concept backing it up. But, this also isn't all style over substance either; each sip will have your taste buds singing.