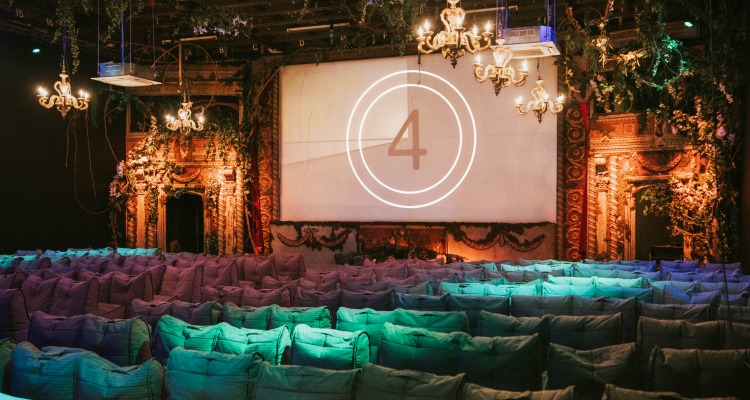 Backyard Cinema is returning for another snowy season.

While cinema has been off the cards for a while, it's back in spectacular fashion. Sure, we're looking forward to the new Bond - but even more excitingly? Immersive film pros Backyard Cinema are returning to South London's Capital Studios. Starting in September, the gang are creating two magical experiences to make your movie-going even more epic. First up, The Winter Night Garden will be channelling Narnia, with a Hollywood world hidden behind an unassuming wardrobe door.

From the 16th of October, The Snow Kingdom will appear in all its frosty glory, screening all our festive faves. Along with being able to watch Home Alone for the 29th time, the space will be reached through an icy passageway and the ball pit river has been replaced by an actual water river. To pull all this off, the organisers have made a few vital changes including more space between the beanbags, one-way systems, and screens between vendors.

And when you're not gawping at a tinsel town classic or slurping the themed cocktails for each movie, Capital Studios has a labyrinth of areas to explore too. The former TV studios has been revamped to host multiple bars, live music, and street food from the likes of Honest Burgers and Mother Clucker. If there was ever a reason to give up a night of Disney+, this is surely it...

The Backyard Cinema returns from the 4th of September at Capital Studios, 13 Wandsworth Plain, London, SW18 1ET. For more unique cinema pop-ups, check out our list.