320 types of beer and gravy burgers? We tried out Beer + Burger in Willesden Green

Just a short, 20 second walk from Willesden Green station, Beer + Burger is a patty beacon, casual drinks haunt and relative newbie in the area. Home to two of my favourite things, I headed on down to see what they're doing different with both beer... and burger.

The décor was minimalist and cool, boasting mainly pine with splashes of bright turquoise throughout, all spread across menus, bar stools and the beer pumps. Despite it being only 12.30pm, the venue felt nicely busy, with families and couples relaxing, all taking their time over their meals. We found ourselves a table adjacent to the beer bar but with a good view of the open kitchen. With Echo and the Bunnymen being played out through the speakers, along with some other 80s classics, Beer + Burger felt like a good place to be spending lunch. Casual and cool, the emphasis on craft beer at Beer + Burger is pretty in your face.

We were instructed that there were beers on tap, but if we fancied anything from the beer fridge, we should just help ourselves and take it to the bar. Much to the annoyance of my companion, I am pretty indecisive in all capacities. Picking a beer was going to be one big task when faced with over 320 to choose from.

With mainly craft beers on tap, the beer fridge contained some famous faces along with plenty I’d never seen or heard of before. Guiltily, I went for a beer I’d had once before: Pressure Drop’s ‘Nanban Kanpai’ – an amazing IPA with yuzu, orange and grapefruit flavours. The other choice was a Japanese Rice Beer called ‘Anticipation’ – a signature brew by the ‘Yeastie Boys’. Yes, we did partly choose this for the pun, but the beer was delicious too.

At this point it was also time to order the food and Andy, one of the two brothers who own the venue, talked us through the ‘must haves’ on the menu. We ordered a bacon cheeseburger (£9.50), a regular cheeseburger (£7.50), wings, mac balls and pickles; as you can see from the prices, all reasonable for the London climate. Andy also ordered some dipping gravy for us, but you’ll hear more about this shortly.

After a short wait, a tray arrived with two burgers wrapped in paper, and three pots containing our sides. Then came the dipping gravy. If you’ve not had the opportunity to dip a burger into gravy, take a big bite and repeat, you really need to do so. It was one of the best experiences I’ve had in a long time and I’m annoyed that I’ve been doing it so wrong for the last 27 years. The burgers themselves were made up of two thinner patties as opposed to a hunking, singular one. Whilst we were sat eating, another customer asked Andy why they decided to make it this way, he said; “meat, cheese, meat, cheese, is better than just meat cheese”. Amen to that Andy, as they were two high grade burgers. 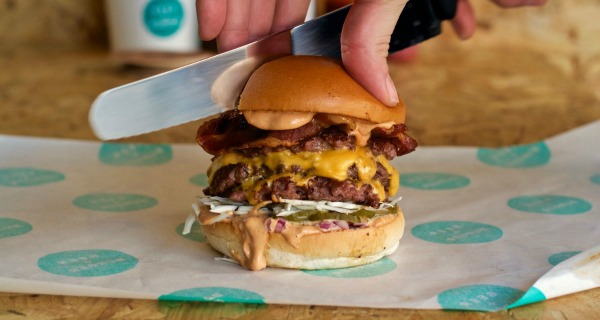 Double patties in your cheeseburger? Beer + Burger nail their bites.

There are heaps of burgers up for grabs in London and we’ve all had our fair share, but Beer + Burger was completely refreshing in a sea of washed-up patties and boring craft. Leaving both full and content, they offer a great experience with none of the fuss. I’ve promised myself next time I’ll choose a new beer.