We tried the Gin Experience at The Cavalry Bar

Hotel bars in London are ten a penny, but for a hotel to have no less than three puts it alongside the likes of The Savoy and The Connaught, and even fewer have the next-door neighbours that The Cavalry Bar does. Located in The Rubens at the Palace hotel, on 39 Buckingham Palace Road, the hotel has just undergone a multi-million pound refurbishment. It’s the latest addition to a flourishing entertainment scene around Victoria with the likes of Nova Food arriving this year and Hamilton moving into residency in December.

The recently re-launched bar has an ambitious strategy for the future, under-pinned by flawless service and a bar that is expanding from 50 gins to 200 within the next year. With the other two bars in the hotel being renovated too, and all helmed by ex-barmen from London’s Artesian cocktail bar – named World’s Best Bar in 2015 at the 50 Best awards – it’s on track to compete with heavy hitters on the London drinks scene.

A suited and bowler-hatted doorman smoothly welcomes me through double doors under a royal red canopy as I approach, and people mingle outside waiting for black cabs. It feels almost comically British, but it’s pulled off in style. I’m instantly glad I didn’t wear trainers. Inside, I’m surprised to find the postbox-red Cavalry Bar buzzing on a Tuesday night – almost all of the tables are full and there’s a soft-crooning soul singer lit by a red glow. I’m told that there’s live music by three rotating artists six nights a week. 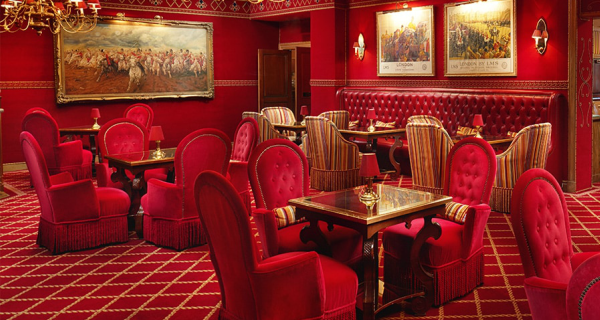 British and bold, The Cavalry Bar stands out in red.

We were there to try out the Gin Experience (£25 per person) so after nibbling on juicy green olives and crisps which came as standard, we sat down with Fabio to talk all things alcohol. Honestly, I’ve never known what all the fuss was about with gin. Recently it’s experienced a boom in popularity which has seen the number of distilleries in Britain doubling in six years, with boutique distilleries like Sipsmith leading the charge after they won a legal battle in 2009 for the right to produce and sell small-batch gin (before it had to be done on an industrial scale). But the second wave of Britain’s gin craze has reached ridiculous heights. Gin appreciation is something that you see on girls’ Tinder profiles, Twitter bios and post memes on Facebook about (“Gin lover” or “I <3 gin lol”), and it’s a bandwagon I have never wanted to get on. So I sat down to the gin experience with a certain amount of cynicism and naivety and not an awful lot of knowledge about gin at all, apart from the fact that it tasted ok in the park in summer out of a pre-made Gordon’s G&T can (I did not mention this to Fabio).

The gin experience lasted about 40 minutes and covered everything from the history of the spirit, to how it’s made, and small-batch manufacturers taking it to market in 2009. It felt like an informal chat with a friend, except that friend was a top barman with an encyclopaedic knowledge of the drinks industry (and even gave great tips on London bars afterwards too). We smelled trays of juniper berries, star anise and cardamom, picking out the flavours in London dry Sipsmith, the Mediterranean Gin Mare and US gin St George, even sampling a bit of German Monkey 47 afterwards. 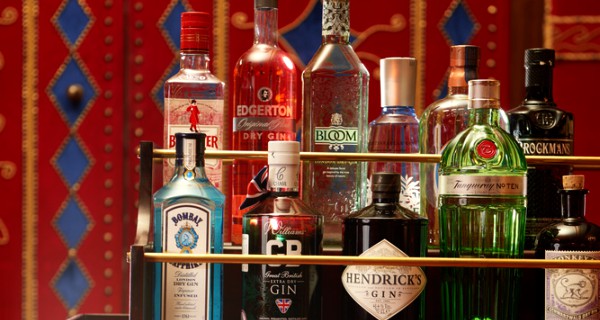 There's a wealth of gin to explore at Cavalry Bar.

The Cavalry Bar’s Gin Experience would make a great gift experience for a friend, and people came up to our table during the tasting, curious to ask what we were doing. It’s great value too and the cosy atmosphere and friendly chat meant that we lost track of time and stayed for more than two hours.

With big things in the pipeline, and new bars in the hotel being renovated as we speak, I predict this is not the last you’ll hear of Rubens and Cavalry Bar, and not the last time you’ll see me with a G&T either  – though not from a can.