Pork knuckle and steins: our night at Munich Cricket Club 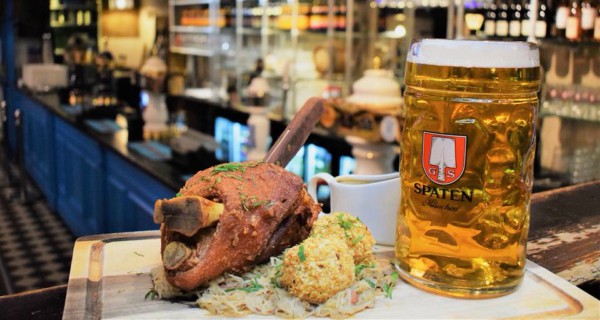 We demolished some of the biggest beers and meat in town at Munich Cricket Club.

The beer halls of Bavaria might seem hundreds of miles (and euros) away but you’ll find a wallet friendly, carefree alternative in the streets of west London. Tucked away from the high street, Munich Cricket Club is a German’s home from home with live music, food and a raucous atmosphere.

The restaurant-bar’s proximity to Victoria Station makes it an ideal spot for an after work stein and there were plenty of patrons taking advantage of that when we visited on a Friday, bang in the middle of the boozy Oktoberfest season. The venue isn’t huge but the the wall of sound that hits you upon entering is enough to make you think you’re in a huge beer tent, three times the size. Low ceilings, wooden beams and alcoves give this spot a traditional inn-like feeling that’s brought back into the modern day thanks to an extensive wine list and cocktail menu - think Apple Strudel Martinis at £8 a pop. With this said, the beers are understandably this drinking den's USP which left my friend and I umming over the venue’s own moonshine, ahhing about cherry beer from Belgium before ending up settling on two wheat-based Paulaner Hefes from Munich.

There is also a Stroh based menu on offer but it’s the schnitzels, sausages, sauerkraut and veggie options that really help complete the venue. And if that wasn’t enough, the lure of giant sharers like the slow roasted Pork Knuckle with potatoes, dumplings, pretzels and chips all smothered in gravy (£26) are just too damn good to turn down.

An in-house Bavarian band blasts out  bangers that have become synonymous with Oktoberfest to help create an outrageous atmosphere. A stein or two later and you’ll find yourself (badly) dueting with the band, unashamedly belting out a Robbie Williams - or worse a Shania Twain - number. By the time we were ready to leave there were more people on the tables than sat on the benches, asserting Munich Cricket Club’s position as one of the capital’s finest year-round Bavarian beer houses.