Hotel restaurants and bars have got a bit of a bad rap - and not all of that is undeserved. Outside of cities, they may as well have been constructed on the world’s most mediocre assembly line, but the thing is, in London, some are actually pretty great. Which is why I was in two minds before attending The Karma Sanctum Soho Hotel’s Wild Heart Restaurant & Bar… that was, until I walked inside.

This ain’t ya grandpappy’s hotel restaurant. See, Wild Heart is less ‘reception that serves drinks’ and more ‘throw the seats out the window but only because your band earns enough to replace it’; because they are all rock and roll. A barman much cooler than me greets us from behind a bar boasting a few faux skulls. The walls are lined with old photos of rock legends and I spotted a few leather apparitions you’d find in Marylin Manson’s bedroom. Candles melt nonchalantly onto the tables. The room is, of course, suitably moodily lit, with natural light just coming through the tinted street-facing windows.

It wasn’t too busy when we arrived (7pm on a Wednesday), but more of a crowd gathered as the night drew on. People sat round the bar, chatting to the bartender as he mixed them up some drinks, and a few big groups celebrating this or that. The atmosphere doesn’t quite reflect the rowdy interior, but it’s clear people came here for one thing: a good time. 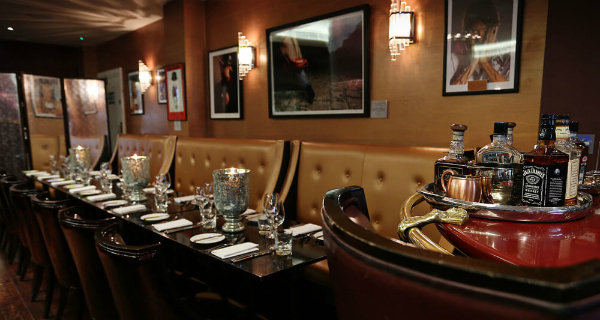 You won’t find the Rock ‘n’ Roll spirit in the menu, though, as it focuses on classic British dishes with a refined edge. We kicked off with a light and fresh bottle of Pleno Viura Blanc (£21.95), before warming up with some small plates.

Thinking about what Keith Richards would order, I started off with a plate of smoked salmon (£10), with pickled cucumber and avocado, whereas my friend, less concerned about the choices of rock stars, opted for crabcakes (£8) with lemongrass and coriander.

The salmon was well cooked, with juicy chunks breaking off with a touch of my fork, and the sheet of smoked salmon and avocado accompanying it made this a wonderfully fresh starter. My friend, weirdly, had never eaten crab before, but this was a great introduction. Even when I – a man on a mission against coriander – tasted it, the crab’s natural flavours shone through the herb, making it well balanced and delicious, and the tartar sauce was surprisingly amazing. Things started off pretty well.

Our tongues and tummies suitably rehearsed and ready for the main courses, we got stuck in straight away. My friend ordered the propa’ British classic, trooper beer batter fish and chips (£15), whereas I was unstoppably drawn towards the lobster linquine (£19).

You won’t go hungry with the fish and chips: not only is there a giant portion of fish, but the phrase ‘chunky chips’ have never been more of an understatement. But despite these being Gene Simmons-sized chips, they were cooked well, as was the fish itself, succulent and wrapped in crunchy batter. The batter was over-salted, though not enough to ruin the dish.

The lobster linguine, however, was the star of the show, coming with half a lobster on the plate, the sauce was delicious, the meat was tender, and the light spicy punch compounded to make a stellar dish. I enjoyed it so much I was scraping the meat off shell and legs like some sort of war chief in pre-Roman Britain.

We finished the meal off with a sticky toffee pudding (£6.50) and chocolate brownies (£6.50). The latter was melt-in-the-mouth gorgeous – soft, gooey, and perfect for someone with a sweet tooth like mine, and the former was the sweet explosion I was expecting. Meal complete, I was so full I needed to be rolled out, which, to me, is a sign of a success. 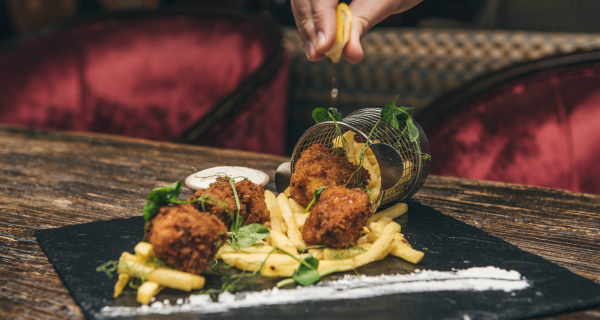 Wild Heart by name, the rock ‘n’ roll interior is screaming to be Wild Heart by nature. But with a solid (mostly) British menu and tasty food, it beats off any hotel restaurant reputation to become a unique enough single to get in the UK Top 40.