What Happened When We Spent An Afternoon At The Distillery, London's First Gin Hotel

From a healthy alternative to London’s dirty drinking water through to a prevention for malaria, the British have been finding an excuse to drink gin since the 1600s. As if to apologise for gin’s brief fall out of fashion in the 20th century, Londoners have taken to once again slurping the stuff with gusto, from small-batch distillers’ bottles lining most bars’ walls through to a hotel dedicated to the mighty spirit. Located in West London, The Distillery is the home of Portobello Road Gin and a mecca for juniper fans, I went along to pay my respects.

In fairy-tale-like form, Portobello Road Gin comes from breadcrumb beginnings and has grown into a four-storey gin palace known the world over. The brainchild of four dedicated barmen, the gin brand started life in spit-and-sawdust pub The Portobello Star. The gang tapped into the renaissance of local gin early by creating London’s smallest museum and holding tasting classes, neither of which proved large enough to quench the city’s thirst. To deal with their fast-growing popularity, the company moved down the road to a hotel which was once affectionately known as ‘the Pisshouse’. Standing out on Portobello Road’s buzzy street, The Distillery is a four-storey palace painted sky blue with their trademark lion emblazoned on a front pillar. 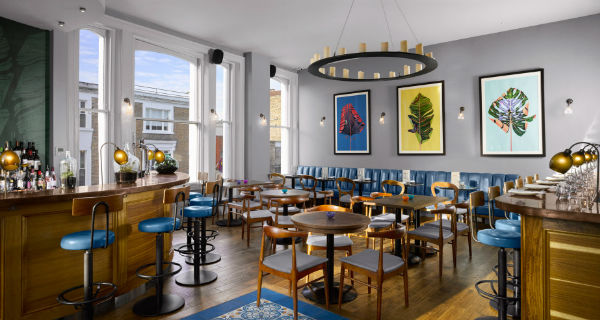 GinTonica is on the first floor of The Distillery are serves a Spanish-inspired menu.

Located on the first floor of The Distillery, GinTonica is a light, airy, art deco restaurant that has been inspired by Spain. Sunlight streams through large single pane windows - grab one of the window tables for views over the bustling street or failing that, a stool at the open kitchen. The menu is short and designed to share, with tapas divided between meat, fish and vegetables. Chorizo Con Sidra (£6.90) was a clear favourite as three spicy sausages were coated in a sticky sweet sauce. Pinchos Morunos were two lamb skewers (£11.50) accompanied by a light salad and natural yogurt and Patatas Bravas (£3.90) are always a winner as cubed chunks of potato come fried and smothered in tomato and aioli.

It’s the gin and tonics that are the star of the show here though. Served in whacking great goblets, drinks are based on the Spanish Copa de Balon, with lashings of ice and light garnishes. Listed in an encyclopaedia-like menu, drinks range from the simple G&T all the way through to Martinis and more unusual bottles. We went for two of the Gin & Tonic Plus glasses which were halfway between cocktail and straight-up G&T; G’vine Nouaison (£11.95) was refreshing enough to halt a drought, as it came muddled with Floc de Gascogne, plum bitters and Fever-Tree Mediterranean Tonic. 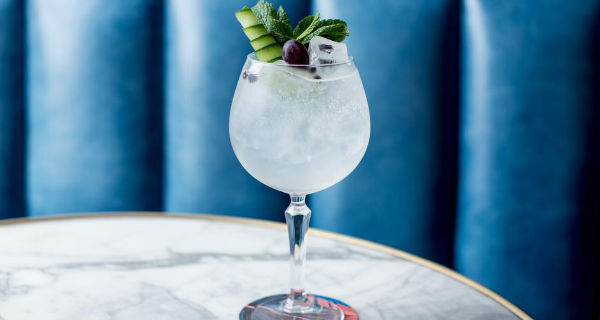 Gin and Tonics are served Spanish style, in a Copa de Balon with a double serve of gin and plenty of ice and tonic.

What began as London’s smallest museum has grown to fully immersive gin experience in the basement of The Distillery. The Ginstitute is part talk, part tasting and part making that costs £110 and takes place over the course of three hours. Things kick off in a reconstructed Victorian Gin Palace as ruby red booths face a chunky wooden bar, from behind which our teacher Jack starts his hour lesson. Forget snore-worthy school classes, gin has a history worthy of a soap opera. With constantly flowing cocktails on hand to help the learning process, Jack explains its origins, from a drop of dutch courage during the Thirty Year War through to the gin riots when the government tried to lessen the number of distillers.

Once we’re done brushing up on our history, we’re given a Martini and shown into an industrial style room with a wooden table full of spices, berries and seeds. It’s here that Sophie attempts to teach us the intricacies of gin, how it’s made and what makes a London Dry Gin. We are each given half a bottle of gin already flavoured with four botanicals and tasked with choosing the remaining six. Over the course of the next two hours we sip, sniff and nibble various spices and distills in order to create a mix completely unique to us which is then labelled and put to the test by our fellow classmates. 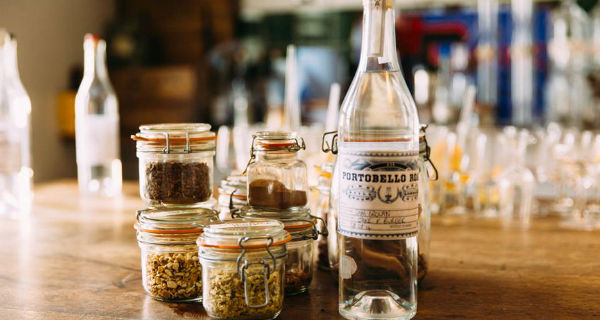 As well as a history lesson, you will also create your very own blend of gin to take home at The Ginstitute.

After six hours, countless gins and a bottle of Strickland’s Salvation (available on request) clutched under my arm, I can safely say I have paid due respect to The Distillery. If you weren’t a convert before, the dedication, friendliness and passion shown by the staff will quickly change your mind. Go for drinks at one of the bars and devour potentially one of the best G&Ts you will ever have, or save up your pennies and book yourself into The Ginstitute. At £110 it might not be cheap but not only can you leave with a tonne of gin facts to smuggly trot out at the pub, they also give you two bottles to take home.