Launched in 2013 as homage to owner Tristan Scutt’s late grandmother, Little Nan’s Bar has seen quite the expansion. Beginning life as a series of pop ups in Deptford, then in East London, Tristan’s aim in this operation was always to get back to his native Deptford. They’ve achieved that and then some, with two locations now open in Deptford and Catford, and regular brunch and afternoon tea events. It’s clear that Tristan and co. have hit on something of a winner, so we went to investigate further.

It’s quiet when we walk in, just a few groups stopped in for an after-work drink, that is until a sudden cry goes up. “Fuck me!” exclaims a man at the bar, as the woman next to him is handed a large cut-glass vase full of orangey-red liquid, curly straws and those little sparkly cocktail sticks. Tristan himself is there to welcome us and give us the history of the place. I’ll be honest, it was hard to fully concentrate, because in this bar there is just so much to distract your attention.

Huddled in the shadow of Deptford station, Little Nan’s Bar is a far cry from the sleek cocktail dens that have filled many a South London railway arch of late. The décor here is applied with all the subtlety of a sledgehammer, but it's not without artistry. From the Pat Butcher portrait on the leopard-print wall of the toilet, to a small trophy won at a bowls competition in 1989, much like your own nan’s living room, the halls are decked out with all manner of trinkets and curios, and some actual boughs of holly, even though it’s been less that 48 hours since November began. 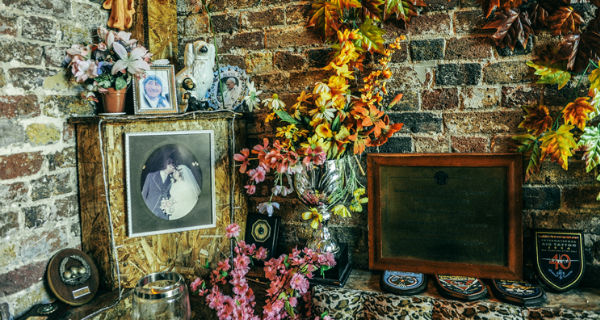 The decor at Little Nan's Deptford Bar is a sight to behold.

Little Nan’s has become known for its atypical drinking vessels. Just one look at their Instagram page and you’ll see square after square of its famous cocktail teapots, as well as vases, mugs and china teacups. We experience a couple of these first hand as our drinks arrive. Turning up in a sundae glass is the Lady Lou Lou of Telegraph Hill (£6), a mix of Amaretto, lemon, cherry jam, bitters and earl grey foam that tastes like a boozy Bakewell. Next up is the Sex Pot Scottish Santa (£7) – Big Peat whisky, lemon, fig jam, smoked foam. Its smells like fruity petrol and comes in a zebra print mug with a side helping of Haribo.

For food, we’re recommended the Disco Fries (£4.95) – chips shaken in a mysterious spice mix called Disco Dust, covered in cheddar, mozzarella and brie. I’m with a vegan so unfortunately these are out of the question. However, Little Nan’s is friendly to the herbivores, offering plenty of vegan options and alternatives on its dining menu of spaghetti hoops and fish finger sandwiches. We opt for the Hipster Fries (£3.45) – the thrice fried chips, coated in Disco Dust, topped with potato smileys and another handful of sparkly cocktail sticks (naturally). Whatever they’re putting in the Disco Dust is certainly working because the Hipster Fries do not last long.

Whilst we’re already here it would be rude not to stay for tea, so we get a teapot of the Lady Bet Lynch (£21), a mix of London Dry Gin, Deptford Market limes, elderflower cordial and Prosecco, served in a gilded teapot with half an orange for a lid and obligatory sparkly cocktail stick.

Over the last five years, Little Nan’s Bar has blossomed, from backroom pop-up into an established brand. It’s clear to see where its success has come from – silly and unpretentious it’s an absolute joy from the bar to the bathroom, whether you’re having a quiet tipple or a full-on tea party.