Haven’t we all dreamt of running away to the circus at some point in our lives? Of dancing with nimble acrobats and taming lions? While the days of the traditional circus are long over, the word still invokes something mysterious, an element of smoke and mirrors. That’s exactly what Covent Garden restaurant Circus brings to Central London, not the animal cruelty and questionable ethics of the past, but rather the art of a spectacle, something that captures your imagination for the briefest moments.

Roll up, Roll up to Convent Garden’s bustling heart to find Circus, the mysterious cabaret bar and restaurant. While the rest of the area jostles with after-work crowds and lost-looking exchange students, Circus is a concealed corner, that only reveals itself to those truly looking. As a surly doorman opens the doors, the venue unwraps itself like a present. As we followed the hostess down another corridor, a second set of doors opened onto the showroom, a large space with a giant quartz stage.

The room fans out from the stage in a series of booths and tables for two, all the way out to the more casual bar at the back. Filled with dressed up couples or fancy-looking friends, the evening is organised in timed slots so everyone can enjoy the show as they eat. Just as we’re about to tuck into our first course, the lights are dimmed, a spotlight shines and our glamorous compere for the evening steps out for the evening. Dressed in a buttoned-up, military style coat and needle-sharp high heels, our host prepared us for what was to come by flirting with audience members and belting out show-stopping tunes.

Over the course of the next two and a half hours, a series of performers dazzled us on the stage in regular intervals. While the acts change regularly, every one of our four performers was incredible, from a gymnast who was more contortionist through to an aerialist who seemed to defy the laws of gravity. 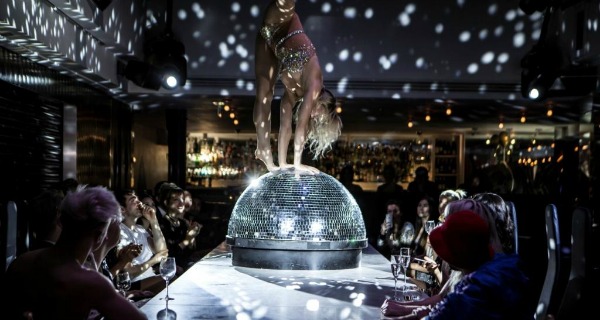 Try and get a seat at the stage for the best view of the amazing performances.

The show doesn’t stop on the stage as Pan-Asian dishes were also works of theatre at Circus. The menu has been designed to share, with dishes ranging from light and easy tempuras through to meaty mains. Goong Sarong (£12) was a great starter as chunk king prawns were served shell-on and with a slurpable plum sauce, all balanced out by crispy noodles and sweet slices of mango.

Chefs are clearly as talented as the amazing performers as truffle-rubbed black Angus steak (£27) was cut into biteable chunks and served on scorching little rocks that continued to cook the meat. I’m usually blind to vegetarian dishes but the mixed wild mushroom toban yaki (£15) had me grabbing bites from my friend’s plate when her eyes were diverted. A thick, gravy-like sauce was filled with chunky mushrooms, garlic and truffle for a warming dish. Circus left things on a sweet note with a more western take on dessert. The churros with vanilla ice cream and poached pear (£8) oozed with a tantalising dulce de leche sauce.

After we’d finished eating, we moved to the bar for one of the venue’s cocktails, a list that combines elements of Asia with the theatre of the circus. The Earl (£10) was as rich as its name suggests with gin, cointreau and peychaud bitters undercut by lemon and egg white. Tempus Moon (£10) was like an Indian summer in a glass as a long cocktail was served with vodka, lychee, lime juice and soda water. 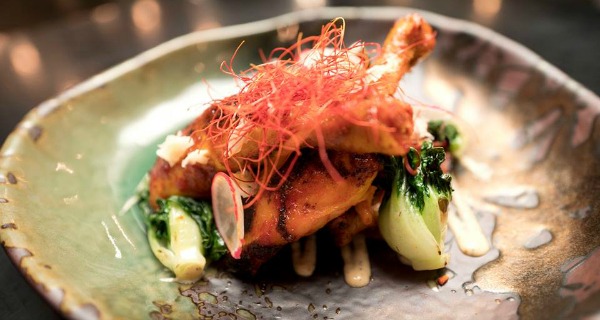 Dishes at Circus are also a work of art as the kitchen creates Pan-Asian cuisine.

You don’t need to run away for thrills, contortionism and amazing acts, you simply need to head over to Circus in Covent Garden. With jaw-dropping acts, delicious food and a far too slurpable cocktail list, this spot offers hours of escapism right in central London.