The brilliant oddity that is Little Nan’s was set up in 2013 as a tribute to owner Tristan Scutt’s grandmother (and her love for soap stars Bet Lynch and Pat Butcher) and after a number of pop-ups, they’ve secured two permanent sites in Deptford and Catford. I’d seen a lot of images of Little Nan’s Broadway Theatre Saloon before my visit (instantly after which I had to go), so when the opportunity to visit arose, I leapt at the chance.

Cosied next door to the Grade II-listed Catford Broadway Theatre, Little Nan’s occupies a large space inside an Art Deco building. The decor not only lived up to my expectations - it exceeded them. A neon-lit ‘Broadway Theatre’ sign greets you as you come in, but that’s just the start of an astonishing assemblage of vintage kitsch wonders. Ruched velvet curtains in every colour, entwined with tropical plants and fairy lights, create the backdrop for a seriously enviable amount of lampshades and trinkets (think fake parrots to cockney singalong books). Seating wise, there’s a scattering of velvet armchairs and sofas (all of which I wanted to steal). Hints of an Eastenders-theme are scattered all over the place, from the Queen Patricia sculpture on the bar, to the centrepiece image of Pat Butcher framed in astro cabinet lights.

Visiting on an early Saturday evening it wasn’t overly busy, though a mix of people flowed through as the night went on. From a couple of older ladies sitting having coffee, an all-female group celebrating a birthday (some of whom were wearing impressive ABBA costumes) and a few couples; it’s clear to see Little Nan’s place has a fun yet community feel where anyone and everyone is welcome to drink in the fabulous-ness. 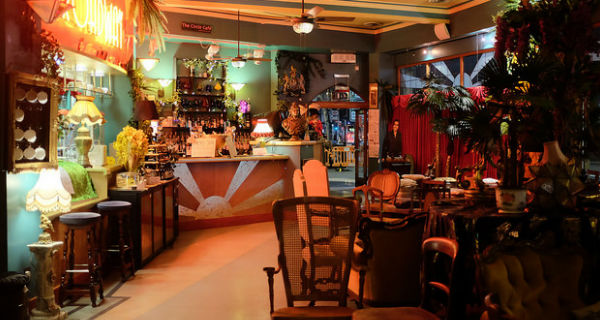 The decor at Little Nan’s Broadway Theatre Saloon is a colourful sight to see.

Little Nan’s are known for their regular brunch events and boozy afternoon teas, but it was Saturday night and for me that’s synonymous with cocktails. Little Nan’s has the kind of cocktail list that I could talk about all day, but I won't.  It’s an amazing handwritten book of tipples inspired by Eastenders, 90s trash telly and much-loved people from the area. We kicked things off with a Deptford Market Mojito (£7) which came in a goblet with spiced rum, raspberry juice, mint, apple juice, cucumber, Babycham and fresh lime juice. It was a fruiter spin on the classic and arrived full of plastic cocktail animals - of course. I opted for the Superstar DJ Steve Davis (£6) which was served in an actual vase (no complaints from me) and mixed vodka, a chunk of little mum’s strawberry and champagne jam, lemon, earl grey foam and bitters, to taste like a delectable sour sweet in liquid form.

Tummies rumbling, we ordered a sharing platter for two (£24). This was a mezze of mini cucumber slices, tomatoes, olives, Parma ham, goat's cheese, hummus, flat bread and scotch eggs, which you can have on its own or with a pizza to share. Served on a cake stand with the pizza on the bottom tier; not only was this a fun idea, it was all so scrumptious. The ingredients were fresh and flavoursome - from the creamy goat's cheese to the crunchy pizza, delicious olives and seriously delightful homemade scotch eggs.

With a cocktail list this fabulous, it would be rude to not try a couple more, and in homage to the bar's inspiration, it felt like sacrilege not try a Lady Pat Butcher (£6). This tipple mixed spiced rum, grenadine, lemon zest, bitter lemon with lemon wedges; and much like the character herself, it was a sharp number that packed a zingy punch. As a rum fiend, the title wasn’t the only thing that led me to choose Dame Patsy Stone (£6) made with white rum, vodka, watermelon syrup, lemon and mango juice; this was a sweet surprise which was dangerously drinkable. 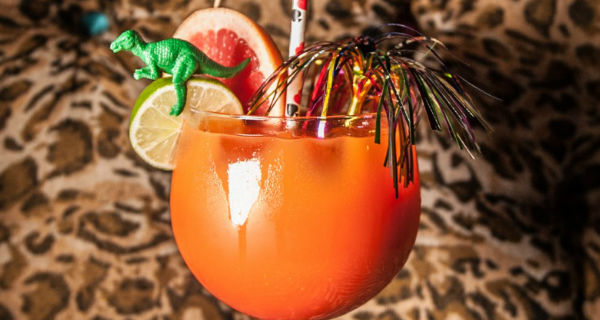 The cocktails at Little Nan’s are as outrageous as they come.

They say you should never meet your heroes, and when there’s a bar you’ve been wanting to visit for a while, it can run the risk of disappointing. This was absolutely not the case with Little Nan’s Broadway Theatre Saloon. I love a quirky bar but this little joint takes it to another level; it’s a bucket-list bar if there ever was one, born from a tribute to a clearly characterful lady, there’s nothing like it in London.