Ticking off no less than 12 restaurants and bars across a three-day stint in Edinburgh, my Scottish travels ended up bringing me everywhere from a secret bar behind a bookshelf to the home of The Society of Writers to Her Majesty's Signet for afternoon tea. With no city break complete without ticking off a brilliant brunch, Honeycomb & Co were tasked with the job of not only helping me complete my ambitious bucket list, but curing my mild/severe hangover.

Note to self and all DesignMyNight readers: there is no such thing as an ‘early night’ in Dropkick Murphys.

Despite playing the new kid on the block for little less than a year, Honeycomb & Co have made a big name for themselves amongst the people of Edinburgh. Interiors are fresh and bright with mustard-coloured, velvet booths and furnishings, scientific structures of honey are positioned on the walls and a impressive gold-topped bar runs down a large chunk of the room. There wasn’t a free seat in sight the day we visited and with a bunch of friends turned away two weeks ago because they had reached max capacity, you should know that this is the kinda place you book in advance.

As I’m sure you’re already aware, making a big name for yourself doesn’t come without hard graft, and alongside nailing the big things (like comfy seating and a unique menu), comes the little touches - and Honeycomb & Co happen to have these down to a tee. Bright, butter-yellow blankets and mini hot water bottles warmed us up from teeth-chattering temperatures, and if you’re unlucky enough to not nab a table - you can soften your disappointment by grabbing something from their window display. It’s stacked with everything from gooey brownies to feather-light pavlovas. 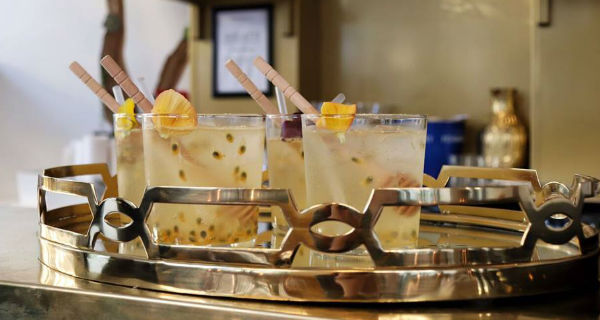 Honeycomb and Co is one seriously hot brunch spot in Edinburgh, from gorgeous interiors down to swoon-worthy drinks.

Forget about your standard eggs benedict and your average avocado on toast. Honeycomb & Co have upped the ante with their weekend brunch menu and it’s inspired by flavours from all over the globe. As mentioned above, I was nursing a ‘mild’ hangover the Saturday we visited and needed something to jumpstart my frazzled taste buds. Taking a fancy for the hot and spicy French toast, it was slightly different to what I was expecting. My French toast was crispy on the edges and at the corners but eggy in the middle. Still unsure whether the consistency managed to win me over, I can say that the blend of tahini yogurt and hazelnut dukkah and sweet chilli jam came swooping in to not only save the day, but to bring the dish to a new level. Topped with salty, streaky bacon, I’m pretty sure I won’t find anything else like it in London.

Panicking in between bites about never experiencing such a dish ever again, my friend chowed down a signature stack of pancakes from the kitchen. They’re no longer on the menu I’m afraid, so I don’t think you can order them, which is too bad because they were kind of incredible. Three fluffy American-style pancakes were dressed and sandwiched with poached pears and silky maple syrup.

Washed down with big mugs of creamy coffee and Bellfield Brewery Bohemian pilsner (that’s gluten-free) in between bites, Honeycomb & Co might not have been a bottomless affair, but it proved that brunch doesn’t always have to be to earn some gold stars. 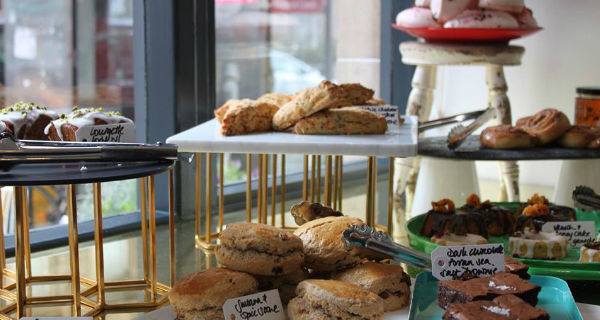 If you're not lucky enough to grab a table, Honeycomb and Co have a whopping selection of cakes you can take with you.

Word of advice? Don’t follow in my friends’ footsteps, and on second thoughts - don’t follow in mine either. Turn up to Honeycomb and Co with a table booked, minus a hangover from Dropkick Murphys. The dishes here do have the power to pump some life back into your taste buds after a night on the sauce, but to fully appreciate the imaginative combinations and how great this place truly is, you should do it on a clean slate, as fresh as a daisy.