Attention Film Fanatics: These UK Places To Eat Are Based On All Your Favourite TV Series And Movies

From binge-watching Euphoria to buzzing about the new Spiderman film, it comes as no surprise that we’ve grown to become quite the movie and television buffs. And the UK is celebrating that with a tonne of eateries inspired by all our favourite Hollywood classics. Whether you’re a Potterhead or just fancy yourself the occasional Friends rewatch, grab your popcorn and relish in the nostalgia as we break down the best TV and movie-themed restaurants and bars in the UK.

Can’t wait for the next Batman movie? We’re still crossing our fingers Robert Pattinson lives up to the hype. After all, Park Row in London has already exceeded our own expectations when it comes to novelty restaurants in the UK. Situated on Brewer Street in Soho, this DC Comics dining experience has several nods to Gotham City from the lounge being named Pennyworth's, to the retro art deco, and incredible secret library entrance. 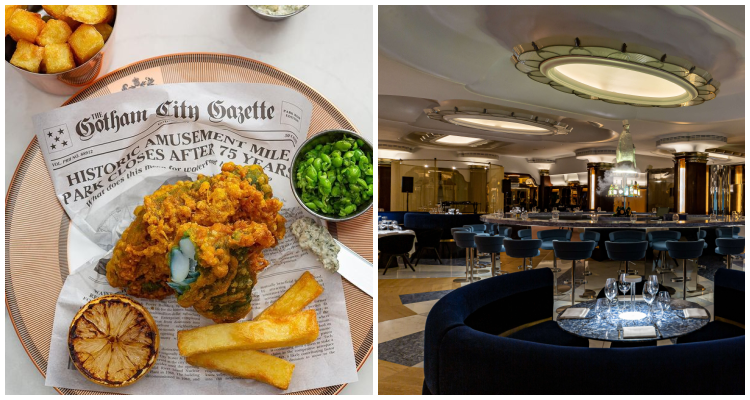 You'll feel like you're dining right in Gotham City....watch out for the joker.

IN LONDON? No, no Central Perk is actually located inside a Primark in Manchester and it’s bringing back all the 90s feels. Decked out with a couch resembling the iconic one from Friends, this cosy place is great for lounging and snapping tonnes of Insta-worthy pictures. And to eat? Check out a New York-inspired menu filled to the brim with sandwiches, pancakes and delicious pizza. While the coffee won’t be served by your favourite barista Gunther, it is ethically sourced and made with the freshest beans. 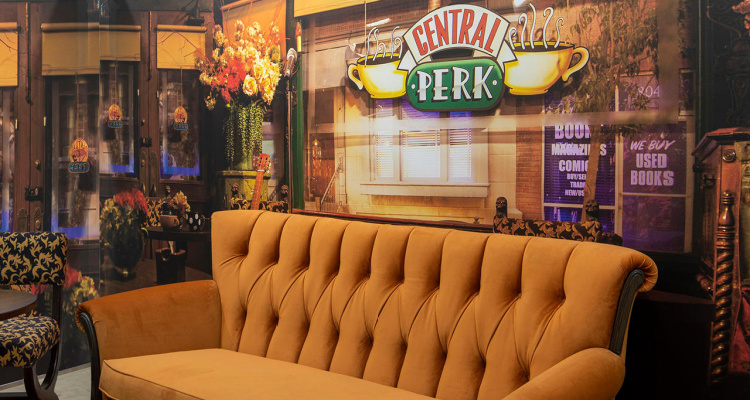 Whether you're a Rachel, Monica or Chandler (def not a Ross), this Manchester spot is for everyone.

It's time to dust off your yellow jumpsuits and channel your inner Walter White. ABQ in London and Newcastle showcase a molecular cocktail-making experience inspired by the highly-addictive Breaking Bad. Partnered with Hackney Funhouse, ABQ is serving delicious sourdough pizzas, alongside espresso martinis from its lounge bar. You’ll get to cook up a few tipples yourself in an RV while perfecting your creative concoctions. Yeah, science! 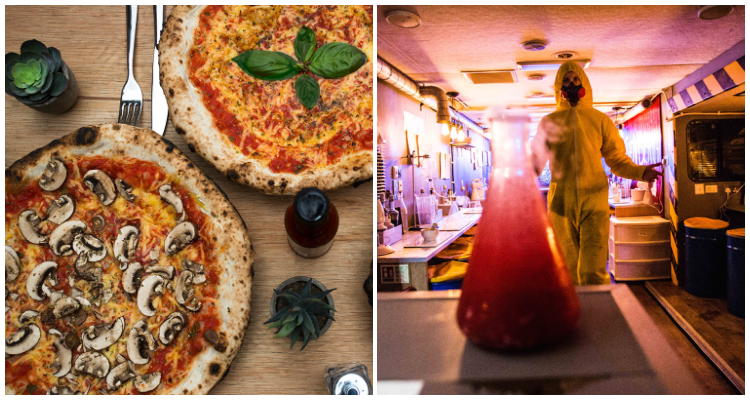 Dine on sumptuous pizzas after creating crystal...erhh I mean cocktails at ABQ.

Based on the Mary Shelley classic novel and film, Frankenstein in Edinburgh is one of the most unusual restaurants in the UK. The spot is located in an eerie gothic church on St George IV Bridge, and if that wasn’t spooktastic enough, the frightening 1931 movie plays on screens above the bar. Enjoy eating delicious stone-baked pizzas while tipping back themed cocktails. Stay for a while and you might get a glimpse of the monster himself to make it a truly immersive dining experience. 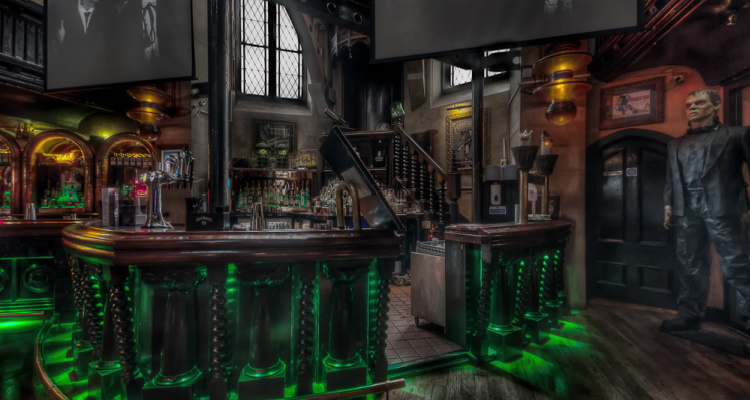 A frightening evening at Frankenstein is for real horror fans.

With locations worldwide, this seafood eatery is one of the best movie-themed restaurants in London. Inspired by 1994 hit Forrest Gump and named after the film's character Benjamin Buford, Bubba Gump Shrimp Co. serves American delights - think innovative crustaceans, delicious burgers and onion strings. And for dessert? Let’s take the saying, life is like a box of chocolates to the next level. Their menu is filled with divine bread puddings and Florida classic key lime pies. 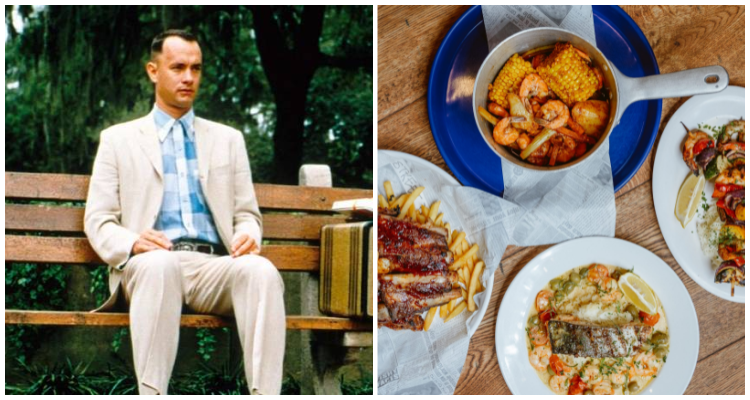 Do Forrest a favour and check out his worldwide restaurant, Bubba Gump Shrimp Co.

Created by a self-confessed Peaky Blinder stan, The Office Bar & Restaurant is a must-visit venue for fans of the hit drama. Settle into this vintage venue for a blast from the past as you take in velvet interiors, rustic murals and more décor inspired by the series. Along with all the 1900s-inspired costumes and classical music, it serves delicious fare, making for one of the best restaurants based on tv shows. 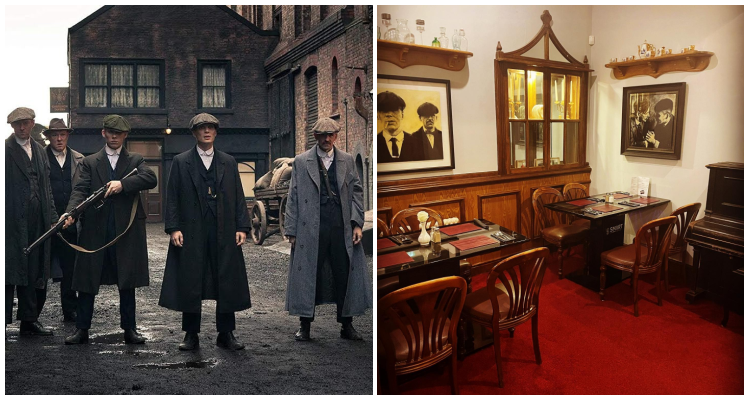 This Dudley venue will take you back to 1919.

If you're a fan of the Sherlock Holmes series, then you're in Sher-luck at Speedy's Cafe. The recent BBC series was filmed right on North Gower Street, and not only is this cafe famous for Holmes and Watson's frequent visits to the London spot, but it now serves themed menu items based on the show such as the Sherlock wrap and Moriar-tea. Another fun fact? The owner frequently gets mail addressed to Cumberbatch's character. 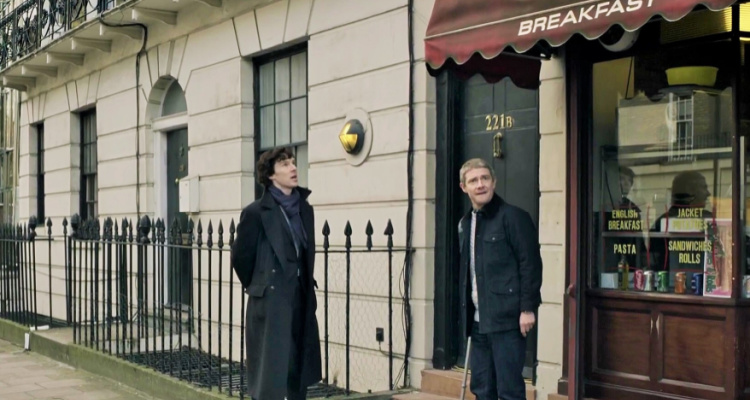 It's elementary my darling when it comes to good grub at Speedy's.

Situated in Ormskirk, Mandrakes is nothing short of magical and happens to be one of the most fun restaurants in the UK. Their all-day menu features decadent paninis, classic lunch dishes and sweet desserts with a little Harry Potter twist. Expect to see afternoon tea sets served in owl cages, as well as chocolate frogs galore. Appropriately named after the baby plant in the films, the venue makes several callbacks to Hogwarts, including the chance to don a wand and legendary robe. 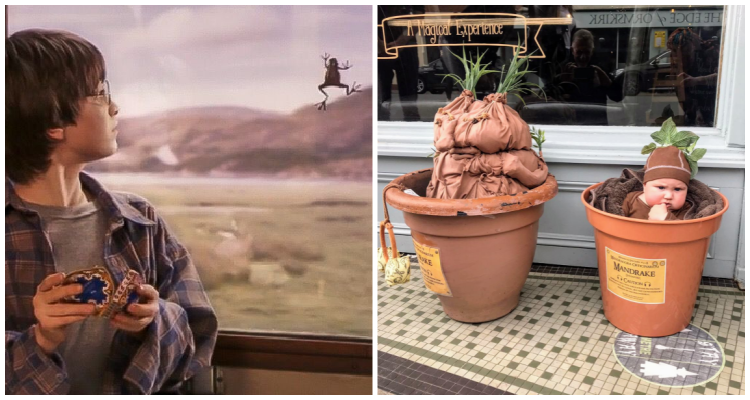 Look out for chocolate frogs and baby mandrakes at this themed venue.

Like these unique destinations? Check out more quirky places to head to in the UK here.