Arcades, Cocktails And Burgers: Four Quarters Is Winning On All Fronts

As winter draws closer, the weather gets stupidly unpredictable and we all want to sink into hibernation mode, there’s no better excuse to lock yourselves up and play video games. And you know what? You don’t have to go into full isolation to do this, as the minds behind Four Quarters realised quite a while ago. With popular spots in Hackney, Peckham, and now, Elephant and Castle, there is no way I could miss out on this place. Cocktails? Burgers? Games? I’m there. 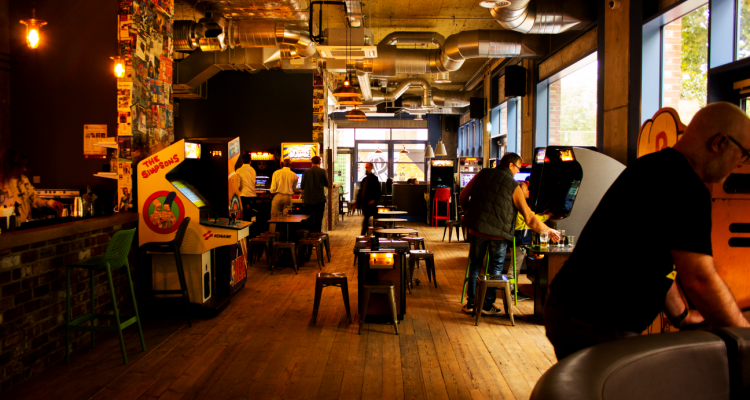 This unique venue has plenty of games to keep you entertained.

The new site had only been open for five weeks by the time we got there, so it was good to see a decent crowd of people taking on consoles and sipping beers with their mates. I couldn’t help but be amazed by the music, at one point there was a Darude Sandstorm remix followed by a dnb remix of Ghost Town by The Specials, but it added to the vibe. With games like Guitar Hero, MarioKart, StreetFighter II Champion Edition and the Simpsons pinball, alongside dedicated booths for consoles like the PS1 and Dreamcast, it kind of felt like the dream uni flat.

After taking a seat at our Space Invaders-style table, a game I was shockingly bad at, it was time for a cocktail. First up, Citrus Bitch (£7) because I loved the name and thought it suited my character. The drink was refreshing, with a grapefruit punch and served in a pint glass because they're not messing around with portion control. This was swiftly followed by Captain Pugwash (£7) which combined spiced rum with a light agave sweetness and a hit of ginger. Between games, I found the time to stuff my face with a Mr Potatohead burger (£12). This was a mouthwatering combo of creamy sauce, melted cheese and a fabulously filling potato rosti plonked on a Beyond Meat patty, served with salted and herb-crusted chips. It was exactly what I needed before getting back into my losing streak. 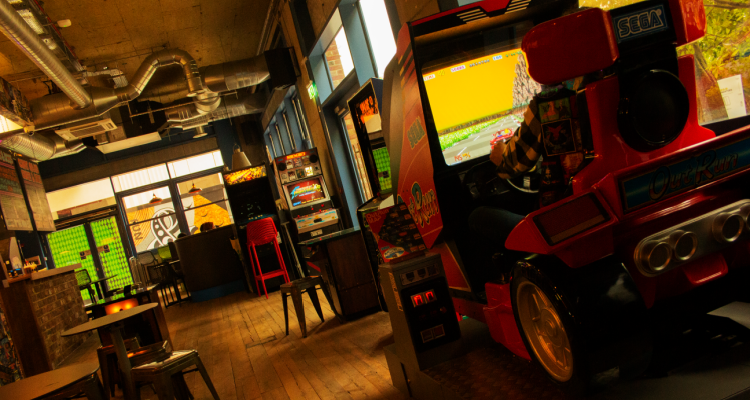 Out Run's little car will have you cracking up after a couple of bevs.

Of course, you want to hear about the games… I lost control of my car playing Crazy Taxi, and laughed my butt off when the Out Run car started moving beneath me. I thought I’d try my luck with Point Blank because I bossed shooting baddies at Time Crisis 2 (holding the gun sideways like I was in a movie proved to be an effective way of aiming), but my reaction time was stunted by a couple of cocktail pints and I missed all of my targets. We had a crack at Tron, but didn’t read the instructions properly and ended up embarrassing ourselves. Nevertheless, I thought I’d try my luck with another driving game before heading off, so settled into Ridge Racer 2 for a thrilling final chase. I came to a fraction of a second behind my boyfriend, you know what? Let's just call it a tie for my ego’s sake. 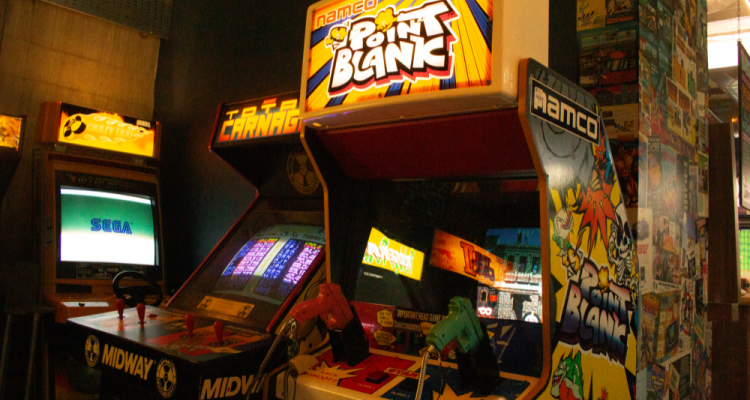 My shooting skills really were not up to par.

I didn't get my name on a scoreboard, but you know what? I don't care, because I had a blast. Four Quarters has all the ingredients you need for a fun night out. It doesn’t matter if you’re winning or losing, this bar is serving up a dream combo of potent cocktails, hearty burgers and classic arcades. It’s every big kid's fantasy...

Want to get competitive? We've got a guide to bars and pubs with games in London here.