A staple in American cooking, the holy pairing of juicy fried chicken and gloriously fluffy waffles has made its way over from the Atlantic and straight to our city. Topped off with golden syrup, eggs, bacon and sometimes remixed into high-end takes or chucked on pizza, this favourite has truly been embraced by chefs and diners alike. To help you get your fix? We’ve found the very best places to find chicken and waffles in Manchester here.

The Spicy Ones: BrewDog

Get your mitts on some seriously good waffles as part of BrewDog’s bottomless brunch. Not only will you get to chug away on the bar’s signature craft creations, but you can gorge on juicy fried chicken and freshly-baked waffles, doused in syrup and the oh-so gutsy Franks hot sauce. Now how’s that for a strong start to the weekend? 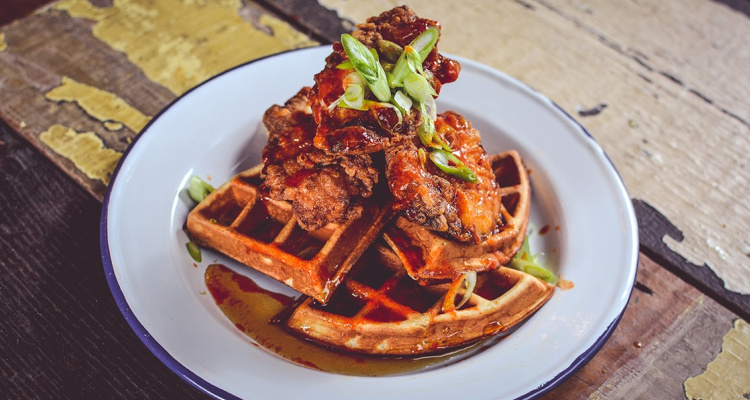 If you can handle the heat, get over to BrewDog.

Searching for places to eat chicken and waffles in the Northern Quarter? Home Sweet Home are dishing up some lip-smacking plates of junk food goodness. Tuck into their ultimate feast which is made up of fluffy homemade waffles with fried chicken, bacon, maple
butter and slathered with signature chicken gravy. 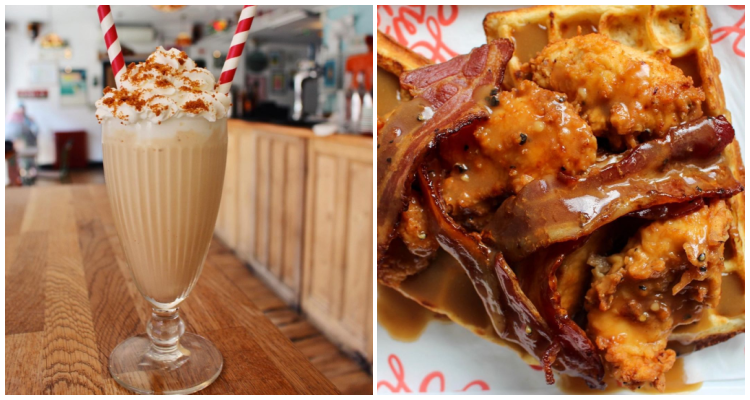 Chow down on a Southern-style dinner of chicken and waffles.

Taking inspiration from the Big Apple, New Yorker Diner is home to a droolworthy collection of classic American plates. Stopping by for cheat day food? Get stuck into buttermilk fried boneless thigh, Brussels waffle and cabbage slaw with signature sauce and maple syrup. Finish off with mac ‘n’ cheese or s’mores fries if you dare... 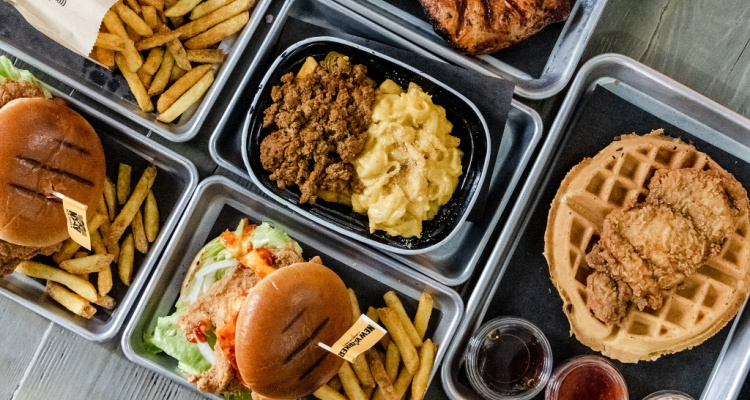 Indulge yourself with an early morning start at Shack, a trendy NQ restaurant that’s renowned for its American-style comfort food classics, from hearty burgers to loaded fries. When it comes to breakfast in Manchester? This place is filling up bellies with chicken and waffles topped with bacon and syrup from 10am to 1pm every day. 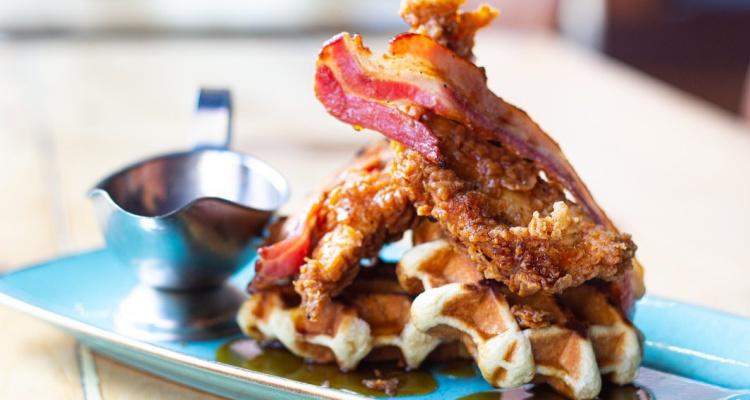 Check out brunch waffles at Shack, a quirky restaurant in the Northern Quarter.

Impossible have, of course, put their own spin on the classic brunch waffle dish, opting for a high-end take as part of their bottomless Sunday roast menu. Chow down on a gorgeous-looking confit duck leg with duck eggs, herb-infused waffles and a warm citrus syrup, followed by a choice of desserts with bottomless drinks for £35 per person. 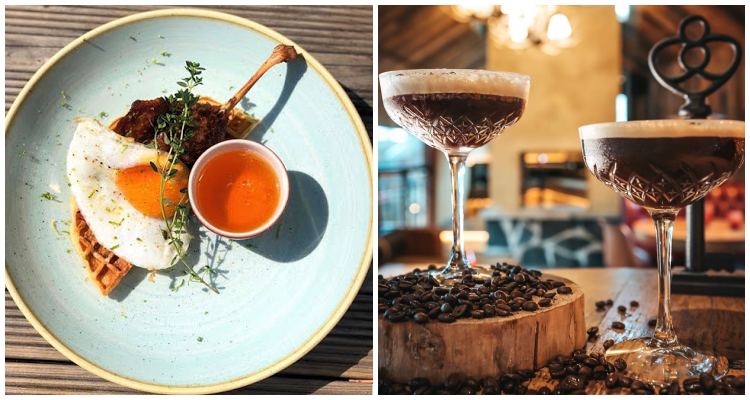 Staying true to form, Impossible have their own take on the dish.

Red’s True Barbecue is serving up some of the best chicken and waffles in Manchester city centre… but not quite as you would expect. The Sleepy James is a drool-inducing creation made up of two crispy fried chicken breasts sandwiched between sweet waffles, and smothered in BBQ sauce, crispy onions, burger cheese and slaw. 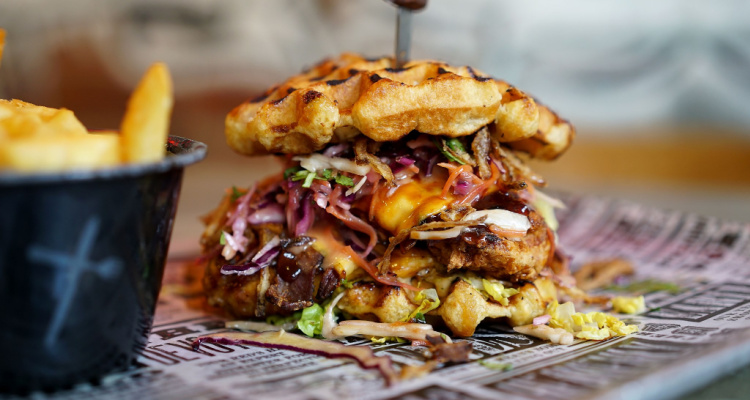 Chicken and waffles in a burger? It could only be the legendary Sleepy James.

Born in London, with outposts in Birmingham and Manchester, Trap Kitchen takes a more is more approach when it comes to dining. The restaurant will create a daily menu for collection and upload it to Instagram, with regular staples being seasoned lobster tail, succulent chicken and sugary sweet waffles with mac ‘n’ cheese. 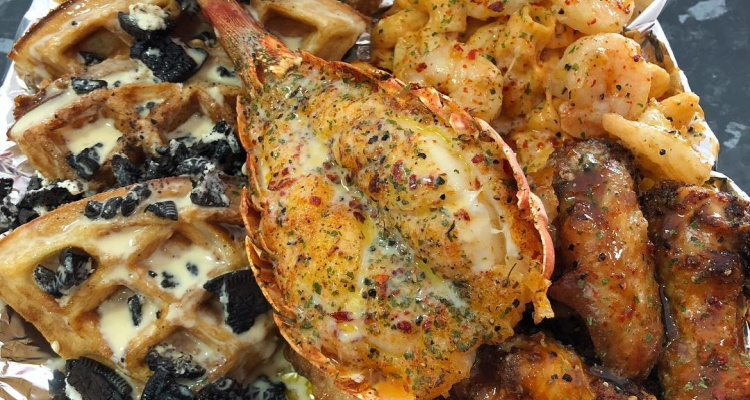 Trap kitchen have the whole 'it's so bad it's good' thing down.

Bird Manchester is a firm favourite for chicken and waffles, as their name suggests. Offering a quirky take on the meal, they actually go as far as dying their baked goods pink or blue before topping with a multitude of goodies. Not into it? Try the doffle burger on for size, which takes crispy thigh, kaleslaw and BBQ sauce before stuffing between warm doughnuts. 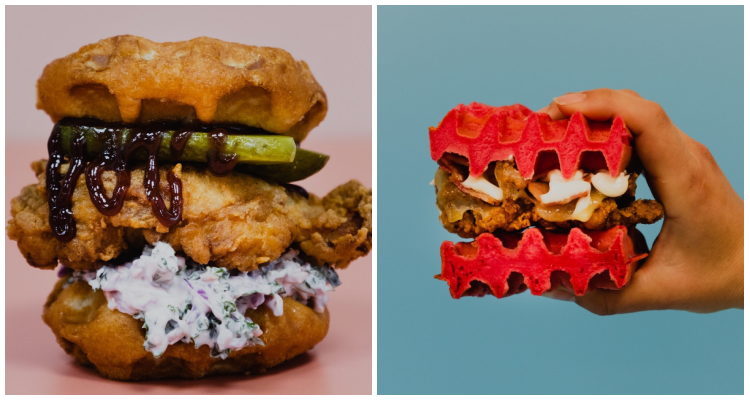 Bird have created colourful and quirky takes on the American favourite.

The pretty in pink Manchester restaurant has earned a reputation for all-American comfort food munching, and damn does it deliver. 202 Kitchen's trapbox-inspired DIY menu features buttermilk fried chicken, topped with prawns or wings, with an additional sticky waffle wedge. Of course, there are heaps of sauces to finish off your creation. 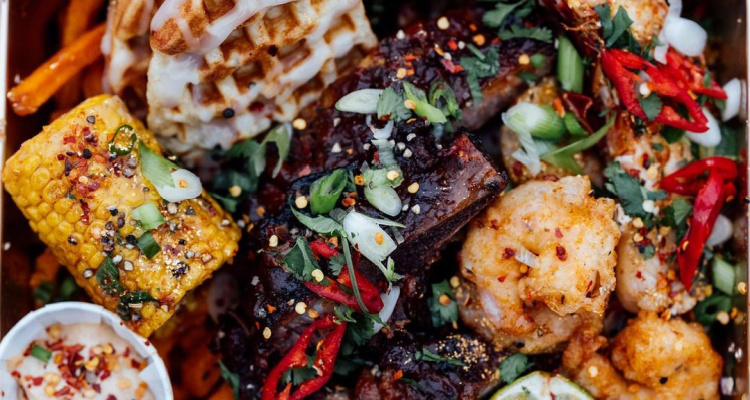 This trapbox concept allows you to build your own chicken and waffle dinner.

Found out in Oldham, Smoke Yard is a sociable space for indulging in an exciting range of food, cocktails and gin. Enjoy classic chicken and waffles, drizzled in syrup and peanut sauce with bacon, or opt for the buffalo buttermilk with hot sauce and blue cheese. Make sure to add on filthy fries for the full shebang. 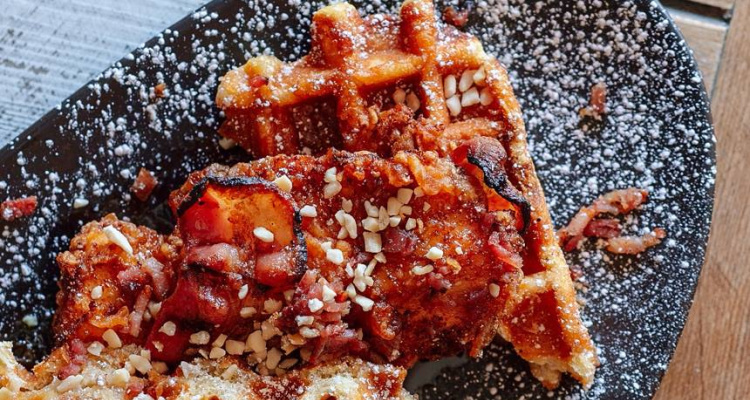 Nothing beats a classic, as this charming neighbourhood diner proves.

Crazy Pedro’s have put their own spin on chicken and waffles, and we wouldn't expect anything less. This Deansgate restaurant is gifting diners with a pizza that comes covered in fried chicken, smoked bacon, maple syrup and waffles. Could this be the perfect hangover cure? Throw in some cocktails and find out for yourself… 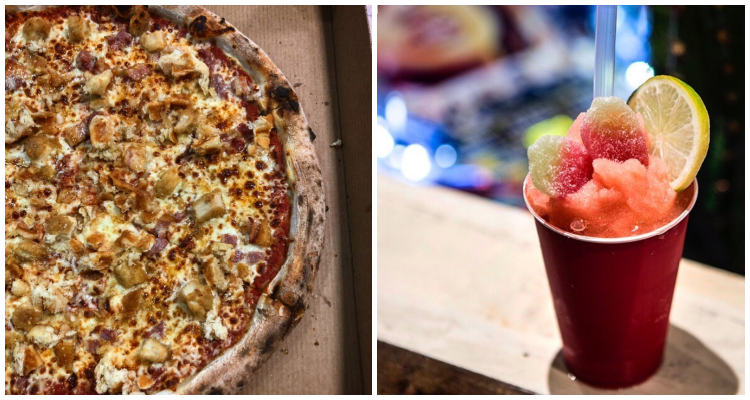 Looking for more hearty brunch plates? Our brunch guide has all you need right here.

Junior Editor at DesignMyNight. Often seen wandering the streets of London in search of vegan eats and good music (sometimes with Ozzy the bulldog).