Flowing Champagne and Beef Carved At The Table: Is This London’s Poshest Sunday Roast?

Part of the Red Carnation Collection, the Chenestons At The Milestone Hotel is fancy with a capital F. Located just a short stroll from Will and Kate’s humble Kensington Palace digs, it’s the perfect spot for exploring London’s most popular attractions. On the breezy Sunday that I found myself standing in its marble-flanked reception though, I wasn't there for sightseeing, I was there to sample the signature Sunday roast menu, created using the very best in British produce.

Thanks to LNER’s poor train service, my entrance wasn't quite what I had envisaged for myself (laden with 3 bags and really quite sweaty), but the staff were immediately on hand to escort me up the stairs, stash away my luggage and hang up my coat - told you it was fancy. 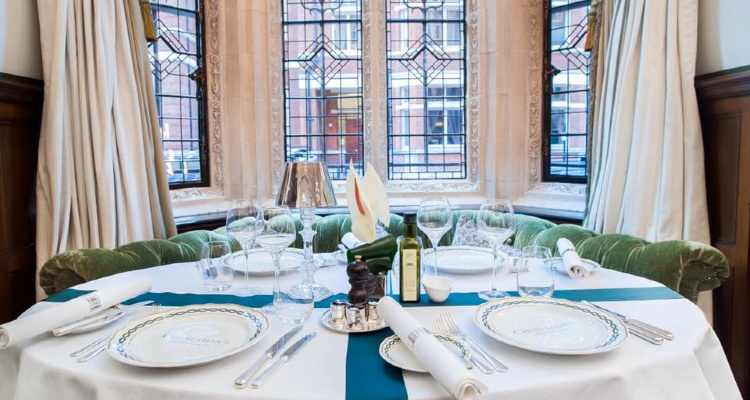 A quintessentially British affair; the team here know a thing or two about laying the table.

Being led through to the hotel past the leisurely afternoon tea drinkers and a gentleman tickling the ivories, I was taken to a wood-panelled dining room which screamed decadence. Complete with a roaring fire, low hanging chandeliers and plush armchairs, it was what I imagine would happen if the worlds of Downton Abbey and Harry Potter were to ever collide (making Maggie Smith a very busy lady indeed).

Settling myself next to the fireplace as I waited for my friend to arrive, I was offered a glass of Lanson Père et Fils (£20) a fruity fizz that matched the opulence of its surroundings. With my friend finally in situ it was time to survey the menu. The Sunday set menu includes three top-notch courses along with tea, coffee and petit fours (£59 per person).

Getting things off to a suitably 70s start, I ordered the prawn and crayfish cocktail which arrived on a bed of shredded lettuce inside an elegant martini glass. To my delight, it was also accompanied by four perfectly-sliced slices of white buttered bread. Following the letter of the law, it was an expertly executed classic and a breath of fresh air when compared to the increasingly common grizzly rye bread/fancy pants butter/served on a bathroom tile situation. 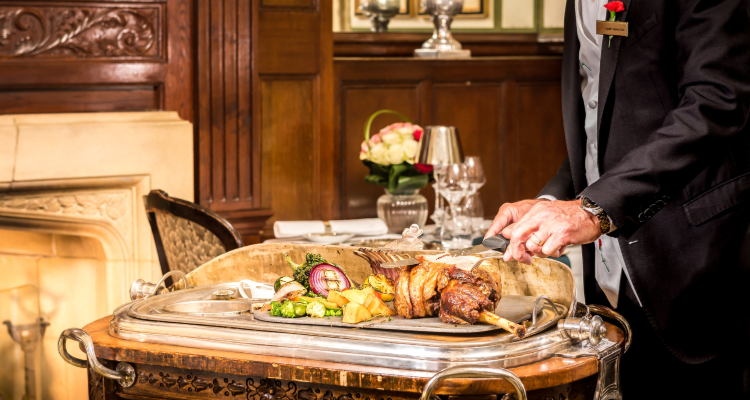 The theatre of the kitchen is brought to the dining room with carving at the table.

On to our mains, and it was time to roll out the big guns. Arriving on a trolley was an impressive hunk of Dedham Vale Beef, suspiciously mahogany in its colour, it was only when our waiter theatrically sliced through that a vivid pink centre was revealed. Falling away from the knife, the generous slices of meat were placed on my plate atop a pile of golden roasties. Served alongside was a portion of perfectly al dente seasonal vegetables, a gigantic Yorkshire pudding and a jug of red wine gravy.

Having ticked off most of North London’s pubs, I like to think of myself as something of a roast connoisseur, and this was by far one of the best I’ve tasted in the capital. It was abundantly clear that thought had been poured into each individual ingredient and the result was truly tasty. To wash it down with? I ordered a glass of Bouchard Finlayson Galpin Peak Pinot Noir 2018 (£20), a rounded red that perfectly complemented the Dedham Vale Beef’s rich flavour. 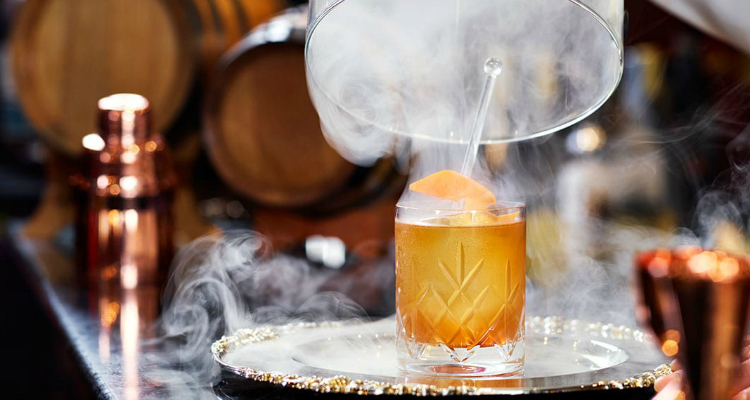 The devilishly indulgent chocolate fondue with banana and caramel ice cream came calling next. As someone who usually struggles to stomach a full pud, I made light work of this baby - the molten core oozing into the ice cream to create Sunday afternoon Nirvana. Unable to rise to the challenge of tea and coffee we resorted to stashing a couple of the beautiful petit fours that had landed on our table into our bags - it would have been rude to leave them…

Your normal Sunday situation this place isn't (unless your name ends in Windsor, that is), but for visitors to the city wanting to experience some traditional British grandeur or for an occasion that calls for that extra oomph, Chenestons at The Milestone Hotel has got you covered. Serving up top-notch food that can only be outdone by the impeccable service, it's a hidden gem in the heart of West London. Just be warned, petit fours melt...

Did We Stumble Upon London's Most Affordable Ten-Course Tasting Menu?

It's An Endless Mediterranean Summer At This West London Restaurant