The last time I had been in Soho? I’d been cycling around a deserted Leicester square, stunned by the silence, and quietly worried for the pigeons who were looking noticeably undernourished. Now? Doors had been flung open, streets cordoned off for al fresco diners and hand sanitising stations were on every corner (and you’ll be relieved to hear, the pigeons were cooing happily above). We weren’t back in Soho to soak up the atmosphere though - we were there to give socially-distanced dining a go at Shack-Fuyu - the Japanese string in Bone Daddies’ oh-so-tasty bow. 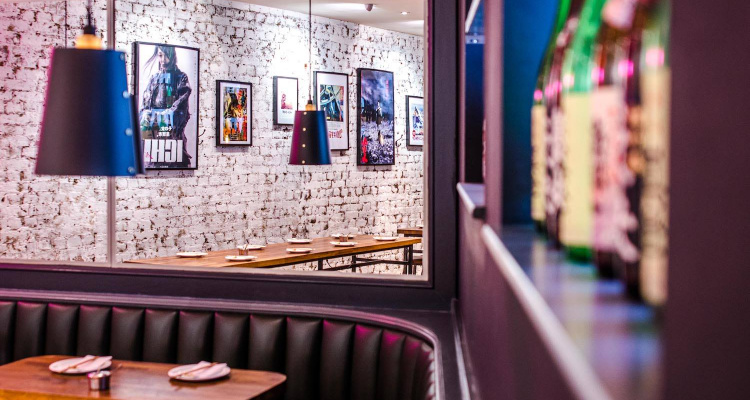 Shack-Fuyu's sleek interiors have been given a 2020-style makeover, complete with floor markings and QR code menus.

Like many of the restaurants on Old Compton Street, Shack-Fuyu had taken full advantage of the extra outdoor space now on offer, with a shiny new terrace allowing for several extra tables. Making the most of the balmy summer evening, we hot-footed it to the last spot on offer. Even through our masks we could already smell the heavenly scents drifting through the door - luckily though? No one could witness our drooling.

X Factor-esque crosses had been marked on the floor and paper menus had been replaced with tiny QR codes - one for drinks and one for dishes. When scanned we were directed to a track and trace webform. After filling in a few details though we were on to the good stuff. For me? A frozen yuzu margarita (£9) topped with orange liquor and agave syrup - it was the first proper cocktail I’d had in months, and boy it did not disappoint. 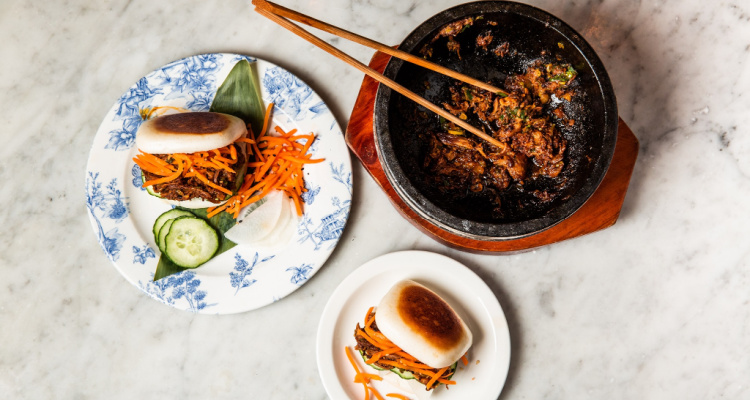 The pulled lamb bao - my kind of weekend DIY.

After some serious squinting at our iPhone menu (I’d advise anyone with a bugbear for screens at the dinner table to swerve dining out for a while), we decided it was time to take the plunge. Opting for a few of the smaller sharing plates, we ordered the miso aubergine (£7.90), Iberico katsu sando (£8.50) and the Korean fried wings (£7.20). We also decided to get a portion of the tenderstem broccoli (£4.90) and the pulled lamb (£12.40), along with the prawn toast (£9.50), which I may or may not have been ogling on Insta the week prior.

Our feast arrived dish by dish, giving us sufficient time to ‘ooh’ and ‘ahh’ before the next. Surprisingly enough (for someone who’s tried and failed to go veggie numerous times), it was the broccoli and aubergine that stole the show. While the tenderstem’s wafu dressing had a distinct tang, the aubergine was sweet and sticky - garnished with tiny crispy bubu arare (an upgraded Rice Krispies), that gave a perfect depth to the texture. That’s not to say the meaty offerings didn’t hold their own though - the pulled lamb arrived as a DIY bao, with vivid cucumber pickle and fluffy buns standing to attention, ready to be constructed. 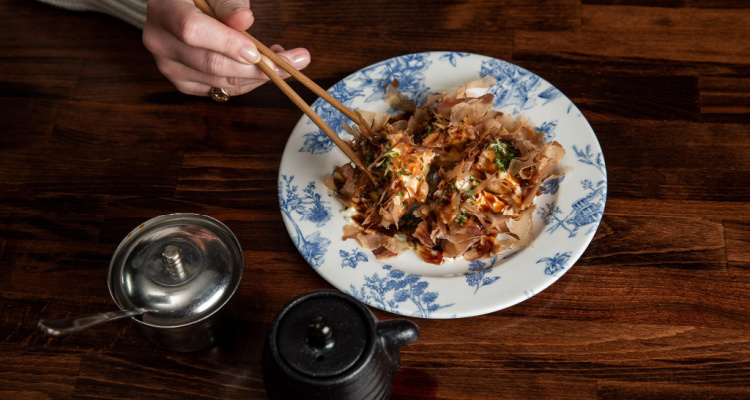 Whoever said you can have too much of a good thing was lying.

And the prawn toast? Oh, the prawn toast. Deep-fried to crispy perfection, these bitesize chunks were daubed in mayo and sweet Otafuku, finished with a delicate sprinkling of smoky dried tuna flakes. Thinly sliced sesame slices from the local Chinese? Now a mere memory. The Korean fried wings were signature Bone Daddies stuff - falling off the bone easily, they were spicy, sweet and sticky all at the same time. Just be careful when the heat hits the back of your throat though... a dry cough will not go down well.

Lip-smacking, tongue-tingling, clothes-staining - a meal at Shack-Fuyu is an all-out kind of affair. While the buzz of Soho may seem intimidating when it comes to dipping your toe back into the outside world, head here for lunch and you’ll no doubt find a much quieter atmosphere - with measures in place to ensure your safety. Better yet? They’re taking part in the Eat Out To Help Out scheme - meaning you’ll be able to get that prawn toast with 50% off. I’ll see you there.

Shack-Fuyu can be found at 14 Old Compton St (W1D 4TJ) and is open from noon 'till 10pm. Looking for more restaurant inspo? Check out our guide to the venues that are now taking bookings here.