All That Velvet: 8 Gorgeous Luxury Cinemas in London

Gone are the days where a trip to your local picturehouse included a watered-down Tango Ice Blast, lumpy chairs and some oh-so-suspect carpet stains. These days, London's cinemas are upping the ante with cashmere blankets, gourmet snacks, lay-flat beds… oh, and Champagne served at your seat, naturally. Spanning the city’s coolest neighbourhoods, these stylish spots are giving the latest Hollywood blockbusters the VIP treatment, and we reckon you deserve a slice of the action. So, settle in for the show and check out our guide to the best luxury cinemas in London.

Located on the banks of the River Thames, Sea Containers is one of Southbank’s most iconic buildings and also just happens to be home to a swanky Curzon cinema. Boasting what can only be described as the sexiest lobby of all time, you can only imagine how good the popcorn is here. Be sure to arrive at least half an hour before the film starts to make full use of the hot food menu, which elevates the standard nacho offering to a whole new level. 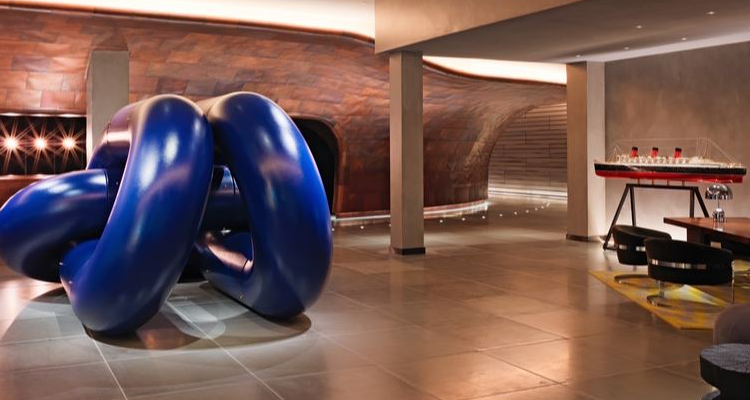 The mother of all cinema lobbies.

There’s extravagant, and then there’s going all the way to Norway to find the very best reclining seat, and creating bespoke tables, just the perfect size to hold a bottle of wine. Enter, Olympic Cinema. Located in West London’s Barnes neighbourhood, this spot has wall-to-wall luxury carpets in both of its two screens, with cosy love seats, perfect for some under-the-cover-of-darkness canoodling. 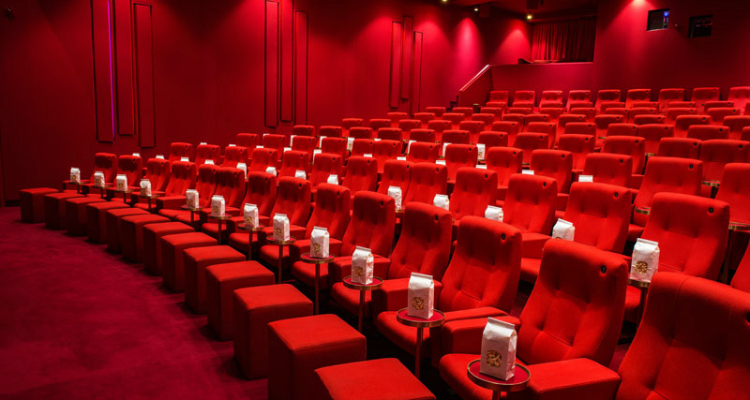 Sinkable seats and drinks catapults this place to another league.

The Cinema In The Power Station

A slinky string in Battersea Power Station's bow, this gorgeous movie house has taken over from Archilight to be Europe’s first and only independent cinema with Dolby Cinema technology. Old school Hollywood portraits line the hallways, while reclining seats provide your setting for fine wines, bottled cocktails and tasty treats. It's not just shopping and ice skating up for grabs at The Cinema In The Power Station. 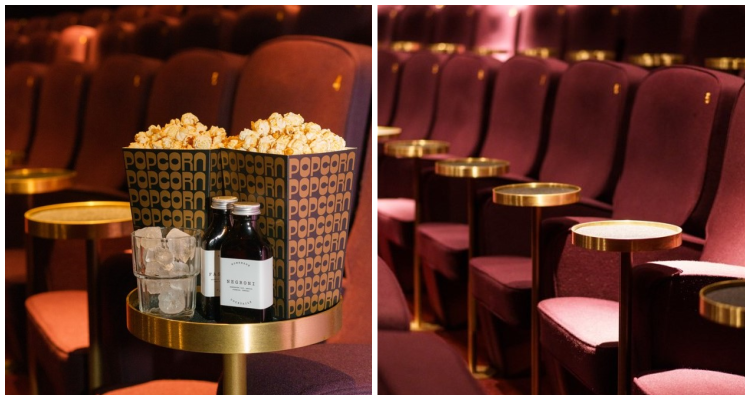 For a luxury cinema London with food and drink, head to Battersea.

Arguably one of the sexiest cinema experiences the capital has to offer, One Aldwych is the stuff of date night dreams. This teeny tiny cinema only sits thirty, but for what it lacks in space, it makes up for in style. Each ticket includes a chilled glass of Lallier Champagne and a three-course dinner at the hotel’s restaurant - Indigo. Regular screenings take place on Mondays and at the weekend, and the films range from the newest Hollywood hits to classic romcoms and seasonal favourites. Clink clink. 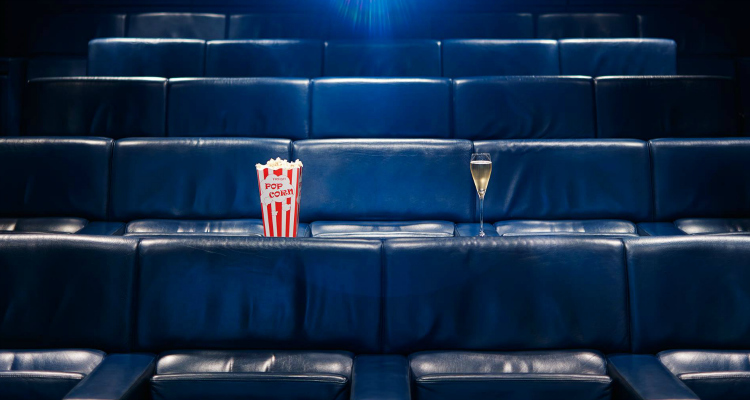 A big coke may never cut the mustard again.

Well on the way to world domination, Everyman is the cinema in London for every man (or woman) willing to dosh out an extra few quid for that little slice of luxury. With tickets here starting at £15, we reckon that splashing that extra fiver will be more than worth your while. Set in some of London’s most iconic and historic buildings, their venues are so gorgeous you’d be forgiven for forgetting to watch the actual film. Book yourself a cosy two-seater, complete with side tables and blankets. 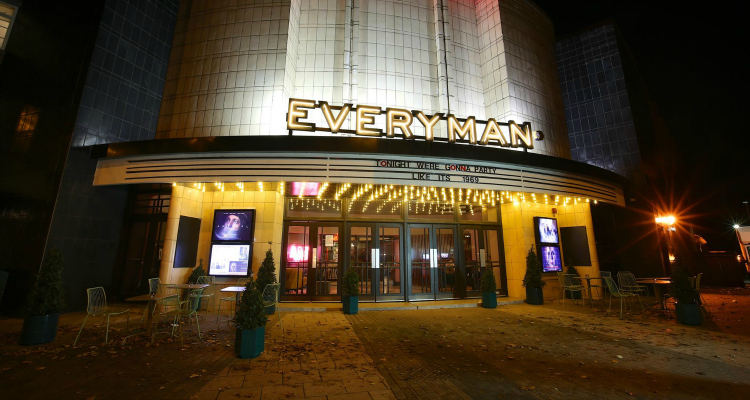 A mecca to all things movie.

Portobello Road’s Electric Cinema has got all the style and sophistication that we’ve come to expect from the Soho House Group. From Cowshed products in the bathrooms to cashmere blankets, picture-perfect sweetie stand and lay-flat beds, every inch of this spot oozes luxe. Head here, or to this place's sister venue at White City, and put your feet up on one of the perfectly-positioned velvet stools whilst sipping on a selection of cocktails from the fully licensed bar. 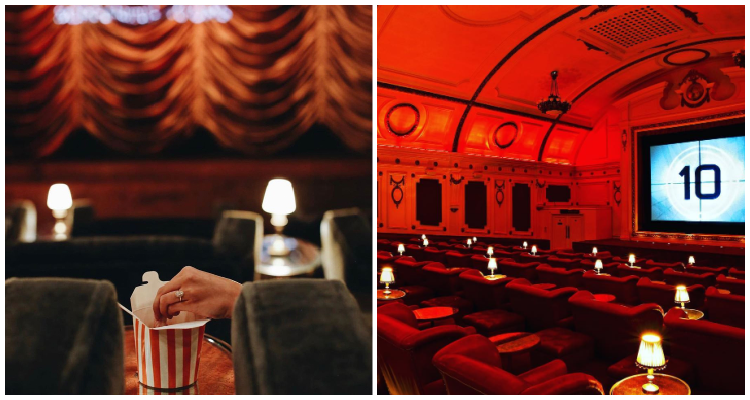 Meet the sofa cinema in London.

The Sandringham of the screening world, Regent Street Cinema proves that decadence truly never does go out of style. Located just a short stroll away from Oxford Street, this place originally opened as a lecture theatre in 1848, going on to become the UK’s first proper cinema. These days, it spotlights indie flicks, short films and the latest releases - all within fancy AF surroundings. 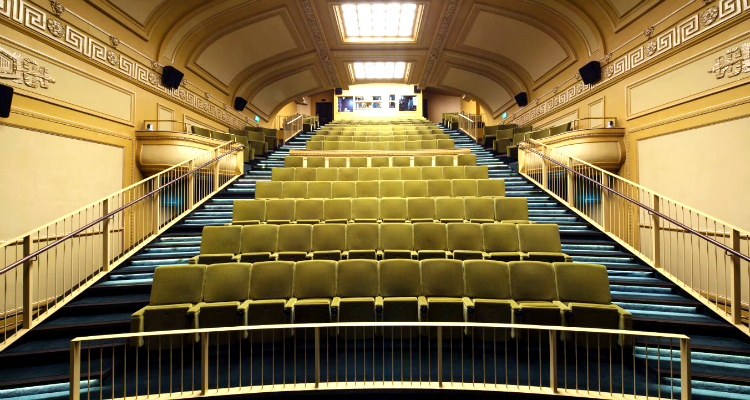 We'll take the royal box, thanks.

The Cinema At Selfridges

After a day of shopping till you drop, you can now fall into a super comfy reclining seat in one of the three screens at Selfridges Oxford Street’s in-store cinema. With state-of-the-art surround sound and laser projection technology, catching a film here is a fully immersive experience. And if all the action works you up an appetite? Head up to the stunning Brasserie of Light for a mouthwatering meal under some imposing Damien Hirst artwork. 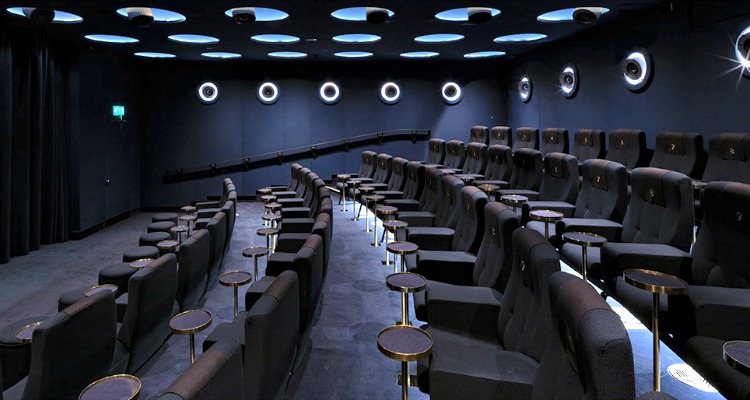 This space-age pick is one of the best luxury cinemas in London.

Looking to get more of your 'flicks fix? Check out our guide to the best quirky cinemas and sign up to our London newsletter.