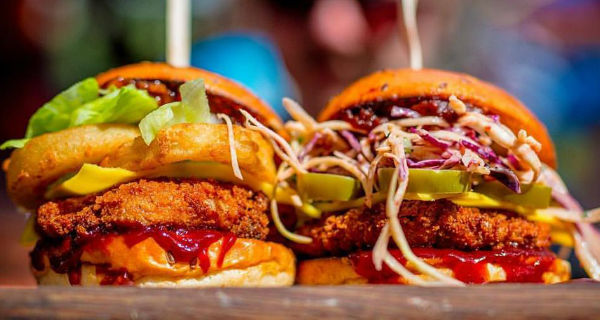 Biff's Jack Shack is among the traders who will be appearing at Vegan Nights at Old Truman's Brewery.

Ditch the seeds, nuts and broccoli most people associate with vegan eating because London's foodie scene is all about the dirtiest and most delicious vegan eats. Now, some of the biggest players in the animal-product-free game are coming together under one roof. Taking place at The Old Truman Brewery in Brick Lane, Vegan Nights will feature stalls from the likes of Temple of Seitan, Biff's Jack Shack, Cook Daily, What the Pitta and many more. With many of the stalls having a cult following, expect to wrestle for fried-chicken-like meals, a vegan roast dinner, and plenty of other goodies. To wash it all down, there will be vegan beer and entertainment will come in the form of live music and the release of Bright Zine's third issue.

WHO IS SHE: International Women's Day at DesignMyNight

Brunch In The Secret Jungle Hidden 14 Floors Above The City