While the USA's current political situation may leave you questioning whether it's ever okay to do things the American way, there are some things they just get right. From the humble hamburger to the New York slice, when it comes to good eating our friends across the pond have hit the nail on the head, and none exemplifies that better than the meaty, salty, sweet and satisfying combination of chicken and waffles. Great for breakfast, even better for brunch and the ultimate brinner dish, restaurants across the capital are flocking to get their own take on the soul food classic on to their menus, so we've rounded up the best places in London to eat chicken and waffles.

Comfort food is the aim of the game of all the Dirty Bones venues and that’s no different with their chicken and waffles offering. Venture into their Grade II-listed building for a no-nonsense plate of crispy fried chicken with waffles and a shot of maple syrup (£11). But don't limit a trip to Dirty Bones with just waffles and chicken: come for the indulgent brinner pairing, then stay for their list of delicious, playful cocktails that act as the perfect accompaniment. 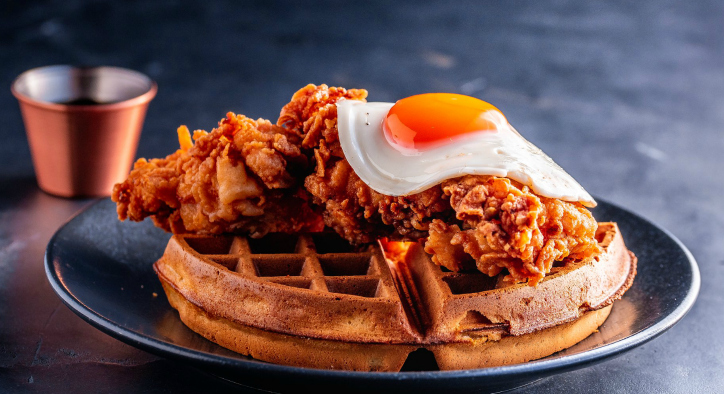 All the basic elements of a good waffle and chicken dish cooked to perfection, with that extra bit of egg.

As the name suggests, you can find all kinds of crazy chicken concepts at Absurd Bird. You'll want to head down to the trendy diner for breakfast, however, so you can treat yourself to a delicious helping of Absurd Benedict (part of their bottomless brunch menu), which takes the concept of chicken and waffles together and runs all the way to the cuckoo nest with it. It's made of waffle, fried chicken, poached egg and a wonderful dollop of hollandaise sauce, with all the highest grade free range chicken coming from the Fosse Meadows Farm, which guarantees that tender clucking taste. 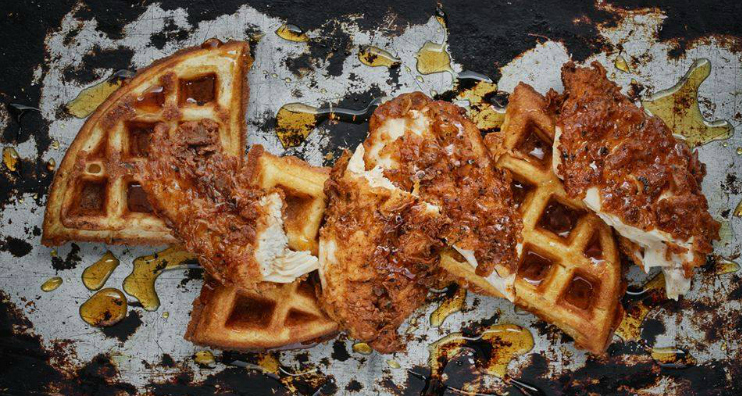 The full-on breakfast one: you never knew you needed chicken for the first meal of the day until Absurd Bird came along.

This one is all about retro American dining, coming decked out in 1950s style red booths and cool neon lights. Their buttermilk fried chicken (£11.50) is similarly retro, bringing the classic flavours of chicken – buttermilk fried chicken, bacon gravy – together with the original waffle flavours – waffles and maple syrup. Add in a bit of coleslaw and you’ve got yourself a deluxe brinner treat. 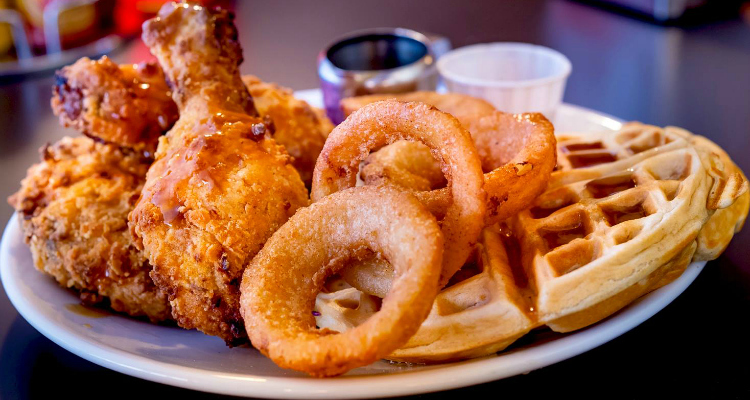 The throwback one - you've got all the elements you need to enjoy both chicken and waffles, and they've mashed them together.

Channelling the glory days of Northern Soul and modelled on old working men’s club (as well as the famous Wigan Casino), Breakfast Club is a must visit for lovers of quirky party venues. And it’s not just the venue that’s off-kilter – their Fried Chicken & Waffles (£10.50) comes served with a side of mac & cheese, pickles, jalapeño, pepper sauce and that all-important maple syrup. 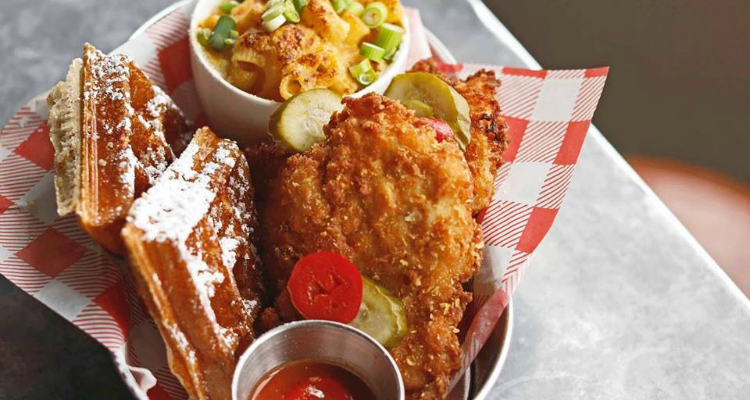 The inventive one - mac & cheese? Pepper sauce AND pickles? Sign us up right now.

Coldharbour Lane's favourite hen house, Fancy Funkin Chicken has pioneered the waffle chicken sandwich that brings you a stomach-stretching mix of funk fried chicken thigh, onion mayo, smoked cheese and maple bacon. Penned in on either side by waffle and topped with a piece of crispy chicken skin, it's the ultimate cure for hanger, hunger and hangovers. 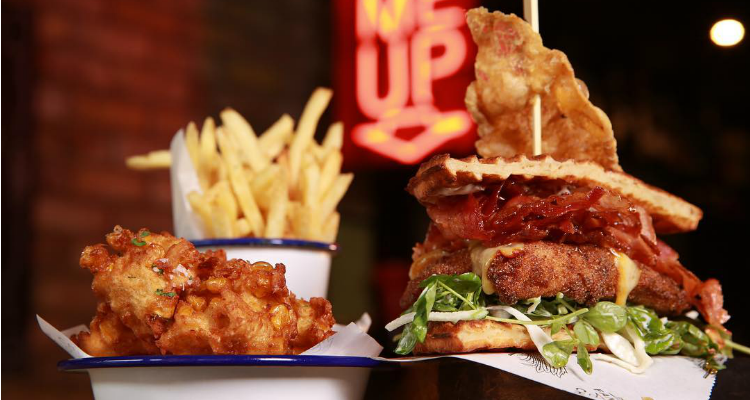 With White Men Can't Jerk in the kitchen, Queen's Road's Prince of Peckham can't lose when it comes to the most perfectly spiced fried chicken (£11). Add some soft, fluffy waffles, pour over some maple butter and maybe add some bottomless booze to the mix and you've got a real recipe for success. 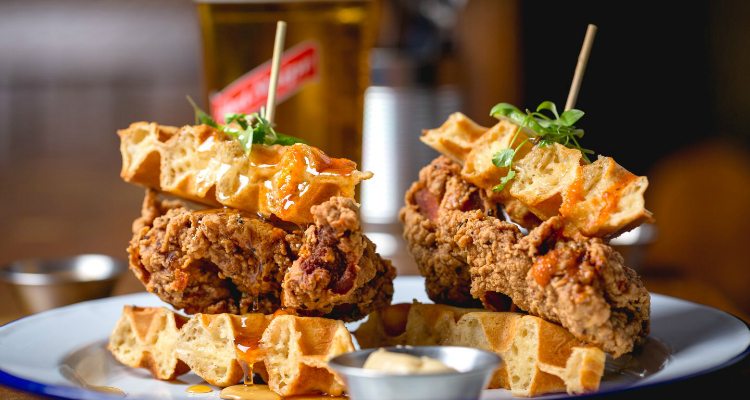 Pair your chicken & waffles with maple butter and bottomless fizz and you've got the Prince of Peckham special.

A 100% plant-based offering from one of London's vegan meccas, the chick'n & waffle (£10.50) dish at Homerton's Spread Eagle pub has proved more than a hit with the cruelty-free community. Boasting soft, eggless waffles topped with seitan chicken, smoky 'bacon' and sweet maple syrup, this meat-free marvel from kitchen residents Club Mexicana is not just the brunch that vegan Londoners want, it's the one they truly deserve. 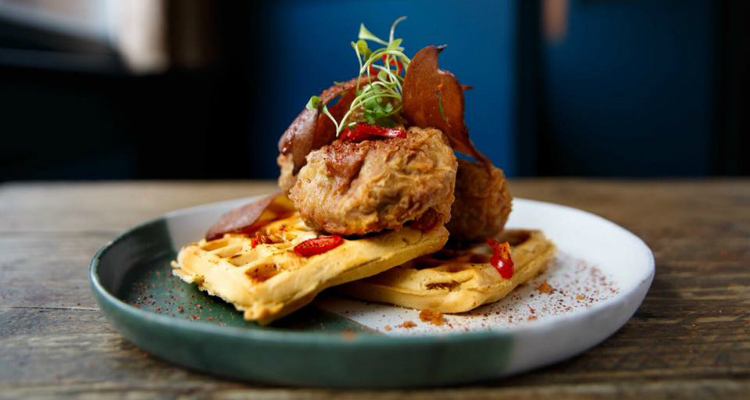 The Godfather of London's chicken & waffle trend, BIRD was the first restaurant in the capital to offer the chicken waffle sandwich at their Kingsland Road joint. However it's the simplicity of their chicken & waffles plate (£12) that gets us with its combo of drumstick and boneless thigh, freshly griddled waffles, honey butter, maple syrup and a dash of hot sauce. 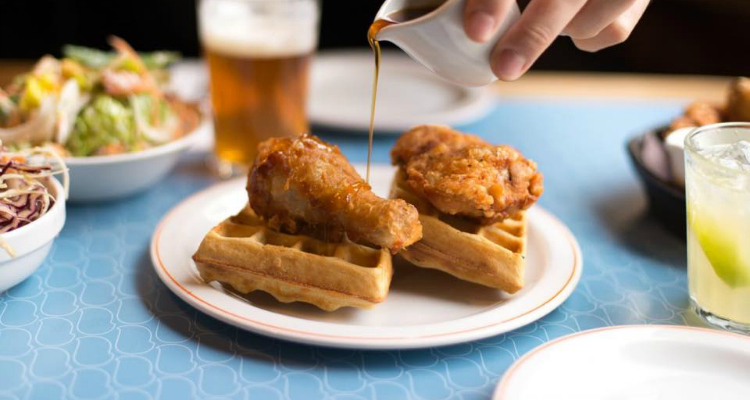 Serving up some of the finest American eats in the City, The Fat Bear is swiftly becoming an institution amongst those with a taste for serious soul food. Their Southern Fried Chicken & Waffles (£13) comes slathered in Sriracha maple syrup already, but if you're looking to turn up the heat you can send it 'Buffalo Style'. 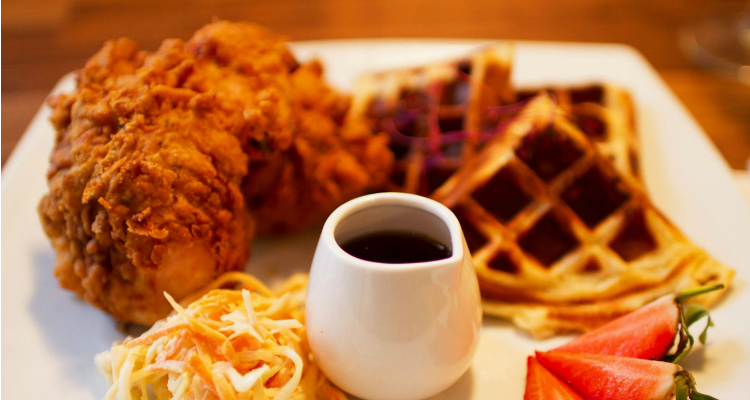 Already home to some of London's finest soul food, The Fat Bear bring the chicken and waffle game as well.

Always offering a little of what you fancy, when it comes to their brunching goods, Foxlow brings you comfort food with finesse. From their bolshy burgers to their egg & bacon poutine, they never fail to hit the spot, but it's their fried chicken, egg and croissant waffle (£14) that really gets you the goods with its Merrifield farm chicken and decadent sausage gravy. 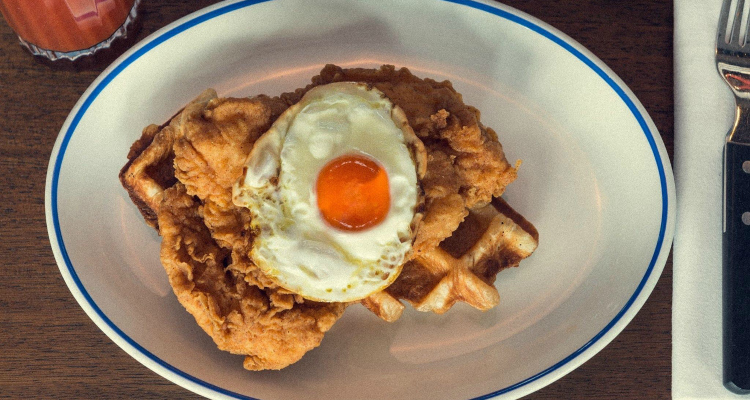 The classic combo gets an update from a croissant waffle at Foxlow.