For the old at heart (definitely me) - and the young, for that matter - there's no better combo come date night than jazz accompanied by plenty of booze. Adopting that killer formula? Nightjar Carnaby, in the hopes of copying the success of its older, award-winning sister site in Shoreditch. I headed to the subterranean speakeasy tucked away at Kingly Court, very excited to find out if this new venue lived up to its legacy. 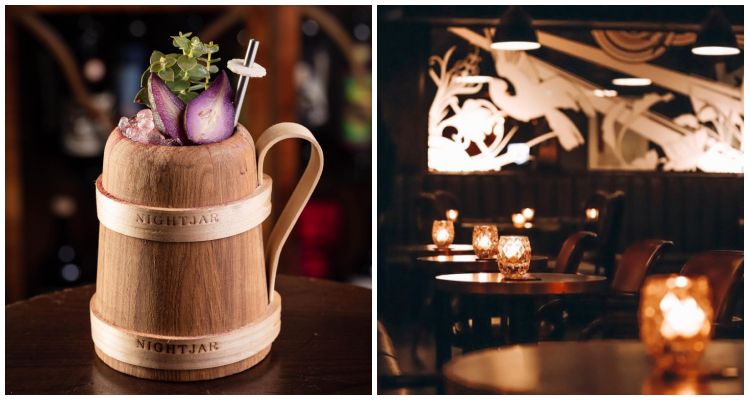 The perfect presentation for drinks here matches the swanky setting.

Going downstairs from the covert entrance, things seemed oddly familiar, thanks to the same mysterious, blackened staircase leading down to the bar as you'd find at the original City Road haunt. In the main space, the interiors become nothing short of sultry. Think dimmed lighting, a shimmering gold curtain as the stage's backdrop, a choice of leather booths or cabaret-style seating, and mirror decorations; the ideal ingredients for ambience. Just as we arrived at 9pm, the main act for the evening began, spilling out bluesy music, live piano and a soulful voice, including songs from the likes of Putting On The Ritz to The Lady Is A Tramp. It's fair to say, the atmosphere was buzzing, and I took to grooving in my seat throughout.

But, onto what I was really here for: the cocktails. For my first two tipples, I went for the sweet but tangy lupita (£14), which was laced with tequila, and a boozy barrel-aged zombie (£16). The alcohol in the former was balanced by lemon liqueur, lulo, lime, prickly pear cordial and a sorbet of the same fruit, leaving a smooth finish. The latter was a twist on the classic, boasting a warming tingle from the ginger beer, four different types of rum, absinthe, brandy, maraschino, mamajuana cordial and fresh pineapple juice. Phew, quite the list. It came in a wooden cup, topped by a flaming sponge cake that was set alight at the table for extra theatre - perfectly matching the punch of this gorgeous tropical number. 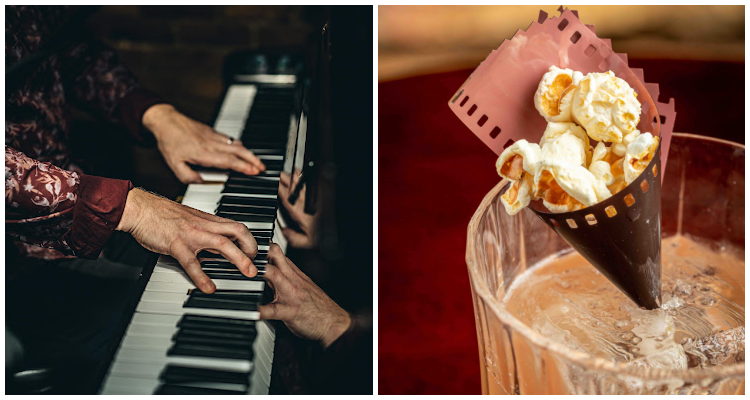 Edible drinks toppings and jazz? Nightjar Carnaby really has it all.

As for my other half, his love of all things spice overcame him; frida (£15) arrived at the table, topped by crispy charred chilli skin and fronting a smokey edge on the back of the tongue after each heady sip of the tequila-mezcal mix. This was whipped up with oregano and tamarillo tincture, Ancho Reyes' Mexican spiced liqueur, coffee, roasted pecan maple syrup and lime for a unique savoury taste. His second, the filmograph (£13), was a proper Prohibition cocktail of Hennessy VS Cognac, Santiago de Cuba 8-year-old rum, Aecorn spiced, Barka Muscat eau-de-vie, fresh lime and ginger beer, plus lots of aromatic citrus from the discarded fruit and guarana cordial. We agreed this was the best cocktail of the night (yup, of course I had a good gulp of everything he chose), as it had a flavour reminiscent of the orange and yellow dummies in Haribo Tangfastics, but alongside a more sophisticated, slightly bitter finish. In a fun twist, it also had toffee popcorn as its decoration.

Sometime between these rounds of drinks, we ordered the manchego board (£12) and Catalonian romesco (£8) to tuck into on the side. The Spanish cheese was served with a softer, flavourful brie-like variety, jam, crackers and grapes for the full spread. While the smoked, yet sweet, veggie dip was so well balanced, we needed a slightly bigger bowl of the stuff. We polished it off much quicker than its crunchy cracker accompaniments, which were slightly too dry and unsalted to be eaten alone. 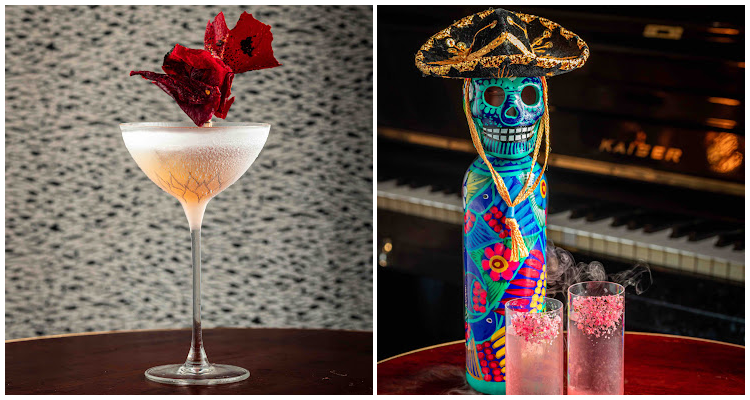 To close the night? A fun sharer of cantarito (£13 per person) that came with dry ice smoke billowing out of its gorgeous Day of The Dead-inspired container. After this had cleared, we poured it out into glasses boasting pink salt rims and took our first sip. You can really taste the tequila and mezcal in this one, which, being my favourite spirits, is definitely a compliment. This is rounded off by a slightly honey-sweet and gently sharp fruit flavour from the passionberry tincture, fresh grapefruit, lime and agave syrup.

If bars could ooze pure sex appeal, Nightjar Carnaby would come pretty darn close. Much like its namesake, this drinking den is combining secret vibes with an original, varied drinks list and crowd-pleasing live music. And once you know a lot of the liqueurs and infusions here are also created in-house, you'll be even more impressed with that cocktail lineup. Would I recommend a visit to this happening spot? In a heartbeat.