Picture the scene: you, your three best mates, one long ass stretch of road...and a Fiat. I know what you’re thinking, but the answer is no. This is not the inside scoop to the opening scene of the third Inbetweeners movie, this is how Pilgrim, one of London’s newest pop-ups, started off. With a permanent site on the way, I ventured to Dalston to see just how much of an impact a 2,000km journey of Spain had on their cooking.

The Concept and the Venue

Inspired by Camino de Santiago, a pilgrimage that has been happening since the 9th century to Santiago de Compostela in Galicia, I was intrigued from the off when I heard about Pilgrim - especially as I have a friend that actually completed the pilgrimage a couple of years ago (two miles of it in bare feet, mind you). The five-course tasting menu at this London pop-up is full of inspiration from the pilgrimage; paying homage to the entire route from North to West and it aims to showcase a different side to the culinary offerings of Spain; goodbye paella. Not only does Pilgrim have a unique concept, but they have a great team behind the scenes too. Dave Bone, who has worked in J Sheeky and The Wolsley, was one of the four who zoomed across Spain in a Fiat for the good of the pop-up world, and he’s also one of the head chefs at work in the kitchen.

Housed in Coffee is my Cup of Tea at 103b on Dalston Lane, the space Pilgrim have hunkered down in for the time being has high ceilings, plain walls decorated with giant blackboards and the odd contemporary picture frame hanging at eye-level, but you’ll have to stay tuned to find out where they’ll be, come 2018. 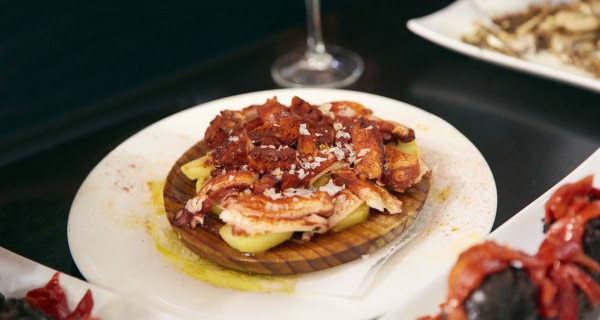 Lightly dusted in paprika, the octopus was one of the stars of the show.

The first stop on our culinary pilgrimage was St Jean Pied de Port, and it brought a salt baked king scallop with mushroom and sherry consomme, trompettes and samphire to the table. Presented in a sealed-shut shell, the scallop was mild in flavour with a salty kick from the fresh samphire. 710km (and one empty seashell) later, we were taken to Pamplona with cider braised Iberico pork short rib, charcoal talo, smoked celeriac and cured onions. Paired with a peachy glass of Txakoli San Martin Sobre Lias, Getariako Txakolina, 2015, each mouthful of meat had a great texture and was rich in flavour which was owed to the pig's strict acorn diet.

Burgos was the next destination on our culinary pilgrimage, and for me - it was the most daunting because it introduced a traditional Spanish dish to the table that I'd had bad experiences with in the past. In English, morcilla de burgos translates to black pudding, but the accompanying pumpkin puree, salted caramel seeds and puffed grains mixed with the meat added a different dimension to the dish, with the cumin drawing out subtle blasts of warmth in between bites. Leaving Burgos behind, we ventured on a further 312km to Leon. The smoked hay cured ox heart with saffron cauliflower, bonquerones and fino sherry was my least favourite dish of the night, but that was soon made up when we made it to Sarria where we were greeted with smoked paprika glazed octopus, Jerusalem artichokes, sea vegetables and ink vinaigrette. Usually served with potatoes and paprika instead of artichokes, this dish was excellently paired with a glass of Laureatus Albarino, Rias Baixas, 2016 that carried lemon and honey notes. Our last leg of the journey was completed with a hazelnut crusted "St. James tart" with apple custard. Pairing it with a punchy vermouth from Galicia, the tart is what's traditionally served at the end of the Camino de Santiago pilgrimage and it was a little 'give yourself a pat on the back' slice of joy. 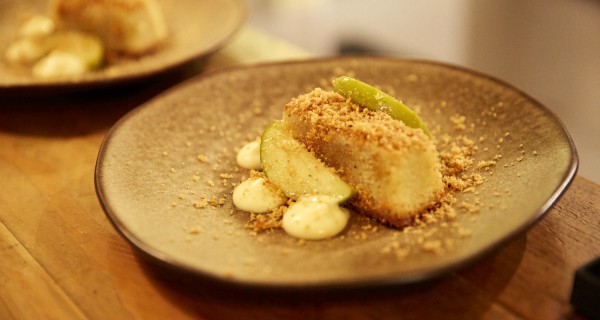 The Saint James tart was heavy, but an all round comforting dish.

I mightn’t have the willpower to do a pilgrimage in my bare feet, or to pack into a Fiat with three of my besties (we’d be a man down, one mile in), but I do have the willpower to take a chance on different dishes and cuisines, which is exactly what Pilgrim asks you to do. With excellent research and a brilliant team acting as the vehicle to the pop-up, it seems that hopping into a Fiat to cover 2,000km in five days wasn’t such a bad idea after all.