I'm proud to admit that I'm an Honest Burger regular. The chain has been battling it out at the top of London's burger scene for the past decade and, truthfully speaking, any so-called restaurant reviewer who hasn't sampled the great dishes here is a bit of a casual-dining novice in my eyes. But with a very special new addition to the menu, I was over the moon to have been invited to Honest Burger in Soho for dinner. I turned up having only eaten a questionable apple/pear for lunch and couldn't wait to get stuck into a classic Honest Burger feast.

As with every great burger spot, Honest Burger is as welcoming as any. Folded amongst Soho's it's-always-Saturday-night bars and open-face restaurants, the burger restaurant sits on a winding side road that's just off Dean Street. It's modest in size. Seating only 24 people at one time, the main dining area is a great place to touch elbows with strangers and experience a truly intimate experience. Though some might see this as a bit of a downer, I think the cosy nature adds a sense of authenticity and honesty to everything the burger joint does. Rather than buying out a huge, impersonal space - which the team could fill - the embrace of their 24-seater creates a buzz inside and ensures that the food remains as consistent as possible.

The venue itself has purposely been decorated in a simple manner. White walls, wood-panelled flooring and plain table tops ensure that all attention is placed on the kitchen and its dishes. The only standout feature is a huge, mounted blackboard, which acts as a blown-up version of the menu. Designed as a sort of chicken, beef and veggie flow-chart, it perfectly embodies the overall laid back vibe of the venue. 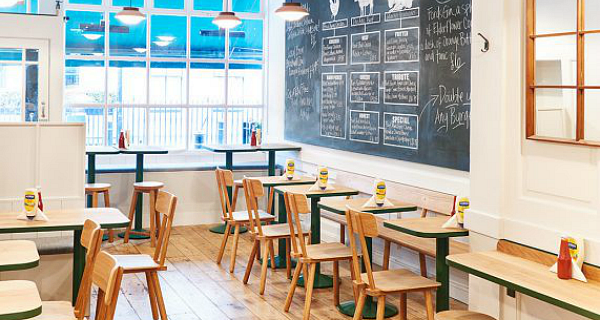 Every night is a cosy affair at here; there's a real buzz about the place and a constant conveyor belt of burger lovers coming in and out.

My prior experience had taught me that it's impossible to leave an Honest Burger site without feeling as if you're either about to burst or slip into a food-induced coma. But even with that in mind, I wasn't quite expecting the cheese-and-meat heavy bacchanal that followed.

We got the ball rolling with a few cocktails. The Kentucky Tea Sour (£6) is a no brainer for a whisky fan like me. Combining Buffalo Trace Bourbon, their own honest ice tea, lemon and topped with crushed ice, it was the perfect drink to enjoy when you're up to your elbows in giant onion rings and huge burgers.

There was only one real option when it can to our food; The California Burger (£12.95). This was the special dish that I'd trekked on the Central Line to see. It was made using a French mustard-fried beef as a base, topped with smoked bacon, double American cheese, caramelised onions, burger sauce, lettuce and pickles. Held between two halves of a toasted brioche bun, the entire dish was incredibly well balanced. The burger was tender, cooked nicely and worked with the melted cheese and smoky bacon to offer a rich, moreish taste. The burger sauce left a great flavour lingering in your mouth, while the fresh salad and pickles offered a great crunch to every bite. In true Honest Burger style, the rosemary fries that come with each dish were nicely seasoned, with just enough salt to take the earthy edge off of the rosemary.

Worried about the amount of beige in front of us (okay, not really that worried at all), we tried to mix things up with a side of onion rings (£3.95) and apple, beetroot and red cabbage coleslaw (£3.50). The slaw was necessary and refreshing; cool, smooth and with a sharp taste at the end, it helped to ease this heavy feast down. By contrast, the onion rings were coated in a thick, spicy batter that fell apart in your mouth. Surprisingly light, a burger feast isn't really complete without these. 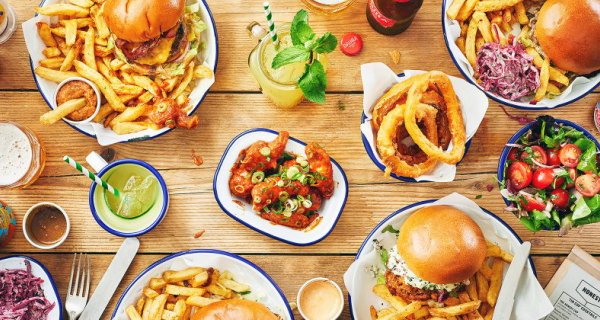 Like I said, Honest Burger only serves its dishes in feast-portion sizes.

There's no doubt in my mind. Honest Burger is top of the artery-clogging stack in London's coliseum of burger chains. The well-balanced burgers are beautifully tender and manage to somehow blend together an impressive selection of ingredients without leaving diners elbows-deep in grease. This is obviously not the place for anyone looking for a light snack. Instead, the team deliver gut-bursting plates of American food that can compete with the capital's best. Just as the angel touched Jacob's hip and left him walking with a limp, Honest Burger hit me with its Crisco-punch and had me waddling all the way home.