How Does Palatino Compare To The Rest Of Stevie Parle's Restaurant Empire?

I spent eight months of my life living in a teeny mountain town in Italy, escaping to Rome at the weekend. And while the Colosseum and Vatican City are crazy beautiful, as soon as you scratch beneath the city’s postcard-perfect exterior, a more earthy, genial Italy exists - along with a great bar that serves shots in chocolate glasses (tweet for details). It’s this more rustic, homecooked, hearty Roman dining that inspired London’s favourite chef, Stevie Parle, and his Clerkenwell-based Palatino.

It hasn’t taken Parle long to takeover the London restaurant scene, going from his first opening at 24 years old to his own food column, cookbooks, and four other eateries. In turn, London loves him, with every new opening, there’s spades of praise heaped on his internationally inspired and seasonally sourced dishes - a formula he’s stuck to in Palatino. Set in a communal working building, it’s not dissimilar to his first (and now closed) restaurant Dock Kitchen, with an industrial room softened by colour-popping interiors. The restaurant runs in lines of three, with mustard yellow booths tucked up against iron-panelled windows, and a glow coming from the open kitchen, which creates an intimate atmosphere even in such a cavernous space. 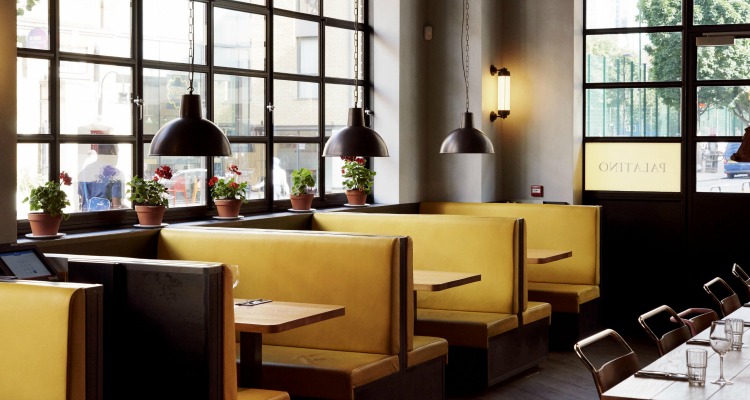 Thought the best thing to come out of Italy was pizza and that David Gandy x Dolce & Gabbana advert? You’ve clearly never heard of pasta as your first course - as in four different dishes, with the carb representing the support act. Before that can start, we’re ripping the antipasti of mozzarella (£8.50) apart, a dish that ticks every flavour checklist, with salty anchovies dressed in a slip of batter and smoky, chargrilled aubergine, melting against the soft white cheese. Citrus flavours are ticked off from cocktail No Nino - a slap of vodka, Meleti, Montenegro, lemon and egg white (£8.50), a short glass that helps you forget the day’s woes in no more than a couple of sips.

When I moved to Italy for my year abroad, the closest I got to a love affair was the 50-year-old PE teacher sending me texts about running away to Milan - little did I know, that the Italian thief of my heart would come in the form of a buttery, saffron fettuccine, stirred through with flakes of slow-cooked goat’s meat (£8.50) that made up my primi dish. Clearly not blessed with the same stamina as an Italian, I was happy to throw in the towel at this point, if it weren’t for the secondi of roasted squash (£18). Even my mother, who thinks ordering anything less than half an animal in a meal is blasphemous, was head over heels for the vegetarian dish. With a chestnutty-exterior, a long slice of roasted squash opened into mash-soft flesh, with spinach, chanterelle mushrooms, and a doorstop size of toasted sourdough soaked in olive oil. 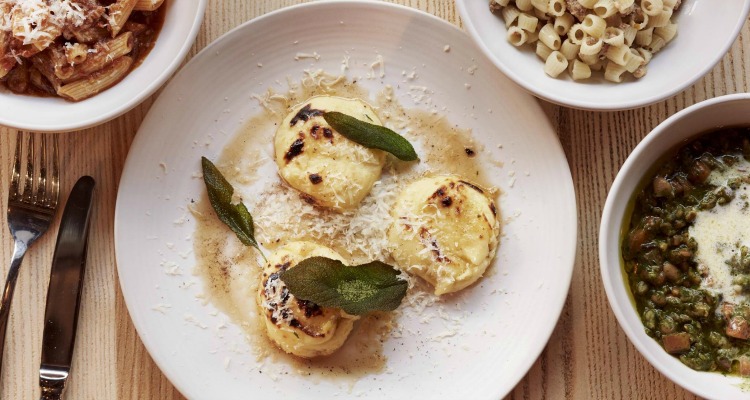 Stevie Parle could put buttered toast on a plate and I - and the rest of London - would make seal-like clapping noises. While my time in Italy was contentious, Parle's restaurants never leave me short of three stone heavier and hella happy. Palatino is no different, it's a little more grown up than Pastaio, but less serious than Craft, with an easy menu that can be chopped and changed, or eaten in feast-like gluttony. And if my hundreds of words haven't convinced you yet, at its core this place is about high quality, drool-worthy food at affordable prices.