There's an awkward 'no-man's land' gap between Shoreditch and the City. It's not really a destination in its own right, and often the dividing line between cool east London hipsters and the rather formal bankers and City workers, rushing to and from Liverpool Street station. So when The Kitty Hawk landed there last year – it had to pick a side. What identity would it choose?

After an initial brief flirtation with being a fine-dining restaurant, it seems The Kitty Hawk has mellowed out a bit and really hit its stride. It's undergone a makeover with a looser, neighbourhood friendly vibe. It’s a one-stop-shop for when you can’t make up your mind about where to go after work. The starched white shirts of bankers have their top button undone and ties loosened.

The Kitty Hawk seem to have thought of it all – there are great steaks and a sophisticated vibe in the restaurant, expertly mixed cocktails in the bar area and a new hidden, chilled out wine bar whose shelves are sagging with bottles, and where you can even taste and pour your own glass of wine from a rotating keg. There’s even a coffee spot if you fancy making a day of it with sandwiches and hot drinks to take away. A year in – it looks like the restaurant has really hit its stride.

A huge open fire takes centre stage as you enter into the bar area and flames lick upwards. Low-slung lamps continue the warm glow and there are enough seats to get comfortable. The whole space has an industrial feel with polished concrete and exposed pipes, but the lighting and buttery soft leather seats feel inviting. It’s unusual to say this of a bar in the City – but it feels cool – it doesn’t take itself too seriously, but it’s showy enough to impress a first date or business client. 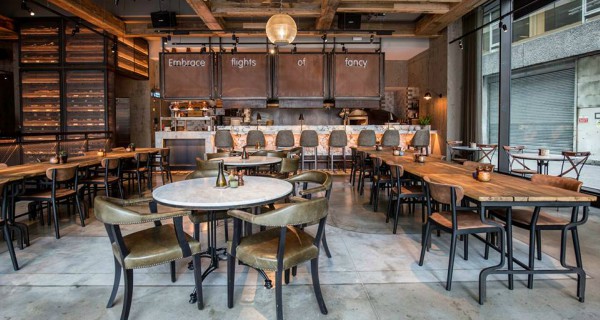 Kitty Hawk is a restaurant in the City that knows how to play it cool.

The bar does £5 cocktails on weeknights and we opted for a Bramble and a Margarita to start accompanied by what can only be described as a pavement slab sized meat board loaded with balsamic pickles, rillettes, peppered sausage, smoked duck and prosciutto and more meat than I could name (£25). It ranks among the best meat boards in London.

Snaking down the spiral staircase to the low-lit restaurant, we continued with a slightly charcoaled fillet steak in a creamy béarnaise sauce with crispy golden chunky chips (£32). After sneaking a look at our neighbour’s dishes, I chose the roasted chicken leg with mash and pancetta (£14) – the mash arriving in a swirl and dripping with rich gravy – the ideal comfort food dish.

For dessert we shared a lime meringue pie (£6.50) with gooey blowtorched meringue on top and crumbly pastry. The lime was zesty and a refreshing alternative to lemon. It also arrived with a crimson swish of raspberry compote – quite a colour contrast.

We then took a secret backdoor staircase from the restaurant up the newly opened wine bar next door – much more of a relaxed atmosphere which also doubles up as a café during the day. It’s a great date spot and their wines change weekly. You can help yourself to wines on tap and pay at the honesty bar later. Bankers? Being honest? Who’d have thought? 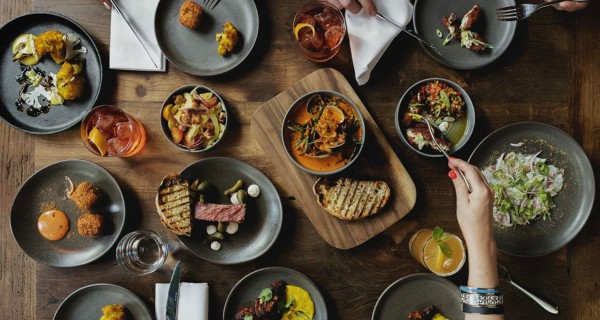 The food menu at Kitty Hawk has had a new lease of life.

This mammoth City spot just got a new lease of life – and as it celebrates its first birthday, it shows no signs of slowing down just yet. It’s testament to its popularity that despite its four floors and “department store” size, it feels packed – no mean feat in a square mile where slick city bars jostle for attention.