Can Dinner On A London Bus Be Glamorous? Bustronome Think So 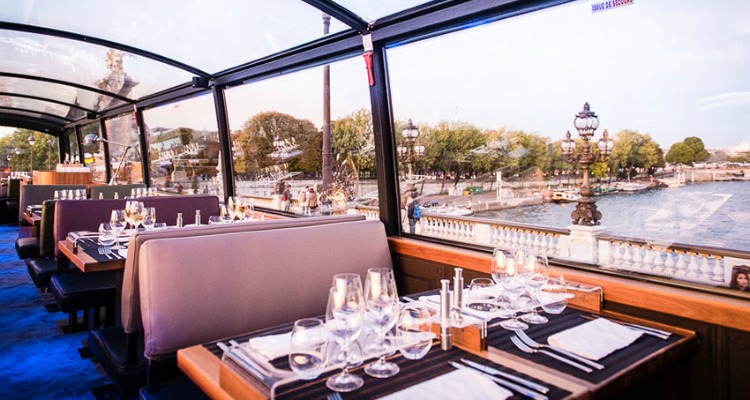 Bustronome weaves its way through many a pretty city, from London to Paris.

I too was dubious at first. While strangers scorn each other for late night kebabs and many wouldn't dare encourage top deck dining (the horror of it all), Bustronome is a restaurant experience that actually encourages diners to chow down while they blitz through the bus lane; I had to know why.

First things first, the bus itself. Less lipstick red and more glossy black, it's sexy against the Southbank backdrop (our pick-up). The interiors of the bus are slick and smart, and could easily hold their weight as the basis for a restaurant in Mayfair. Your table even comes equipped with its own Audiopen and map of London; I didn't need to hear about the Royal Courts of Justice, but I know plenty that would have lapped up the knowledge.

When it came to dinner, I was equally as impressed. Enjoying six gourmet vegetarian courses (all very well cooked and erring to the side of gastro) over the duration of our two hour drive, we worked through everything from risotto topped with a parmesan crisp to a plush chocolate mousse topped with meringue. It's not cheap at £150 per person, but you're getting a wine pairing with that (Champagne and four glasses of wine) alongside table service, drinks saved from the crashing of street turns by smart, lasercut holders, and the fact that the bus has a working toilet (i'd pay £20 for that privilege alone).

While I won't be working through a risotto on the 69 any time soon, I kind of like what Bustronome encourage. Sure, it's tourist-geared, and perfect for seeing the city and its monuments, but they're giving the London bus a dose of glamour that it's never experienced before, and the food truly does stand out in the environment. My only gripe? More heating come winter and less transparent toilet windows; no cabbie deserved to see that.