Treading the fine line between Instagram destination and respected restaurant, Kym’s is the City spot that puts an emphasis on eye-catching interiors, flavourful plates and attentive service. Sandwiched between the likes of Brigadiers, Caravan and Koya, it's stiff competition here. Like its Michelin-starred sibling A.Wong, Kym’s focuses on upmarket Chinese food and while traditional Cantonese dishes are usually the draw, it’s the new lobster brunch that has got tongues wagging. 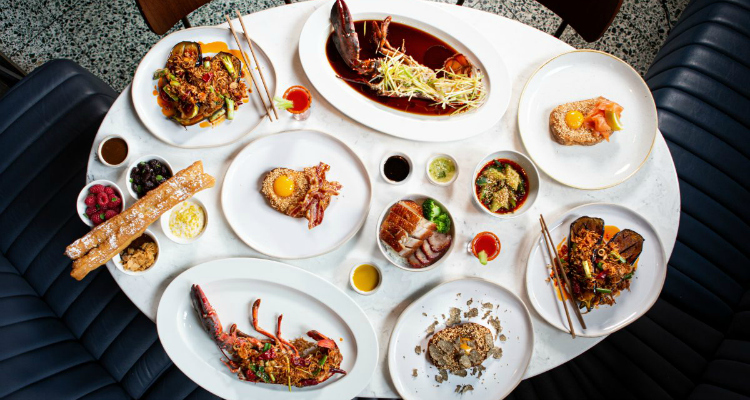 Not one to do things by halves, Kym's has unleashed a decadent lobster-centred brunch.

Housed within the imposing Bloomberg Arcade – something of an edible heaven – Kym’s seems like an unassuming City-boy hangout from outside. But once we’re past the entrance, it’s impossible not to take in the high ceilings, muted tones and towering pink blossom. It’s such a simple and elegant space that we’re almost distracted from the open-plan kitchen… almost.

Roasted ducks were hanging on one end of the kitchen, looking juicy and ready for eating… but that’s not what we were here for. Taking my partner along for a little lunch date, we settled into our lobster brunch (£45 per person) with palate-cleansing smacked pickled cucumber and a bloody mary shot that was finessed with a powdery, peppery rim. Free-flowing bellinis (£15 per person) – though a little on the flat side – were just as flavoured, with chilli, ginger and plum emanating through prosecco. 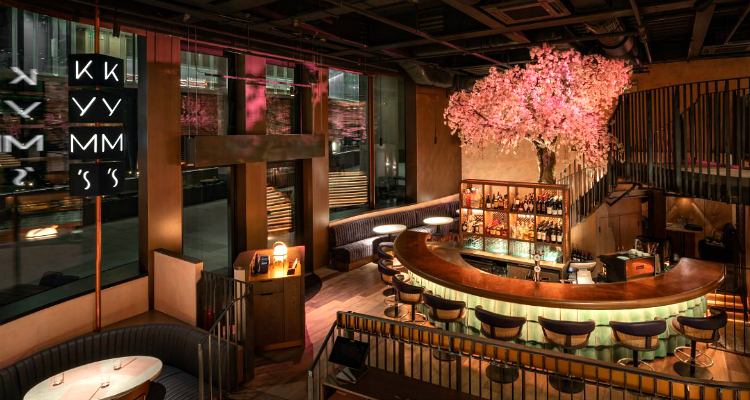 A grand space, Kym's is a looker.

With each starter and main, there’s a seafood and veggie option – we easily opted for one of each. Prawn toast was nothing like my childhood takeaways. Pimping out sourdough bread with a thick layer of prawns and a sesame coating, this drool-worthy slice was finished with a perfectly cooked egg yolk and a slick of salmon for maximum luxe points. The veggie twist was somehow even more delicious, as prawns were switched in favour of wild mushrooms and dusted with fresh truffle.

For the main event, half-lobster could either be poached in Kym’s special soy or roasted typhoon shelter-style and I most definitely liked the sound of the latter. Roasted and de-shelled, plump lobster was slathered in chilli, mushrooms, shallots and a spicy glaze, before being carefully placed back in its shell. Yet another dish bursting with flavour, this would have been perfect if not for an overzealous helping of salt. The veggie option was another heavy hitter, with a fleshy, fat aubergine cooked until it was super soft and seasoned in the same typhoon mix. 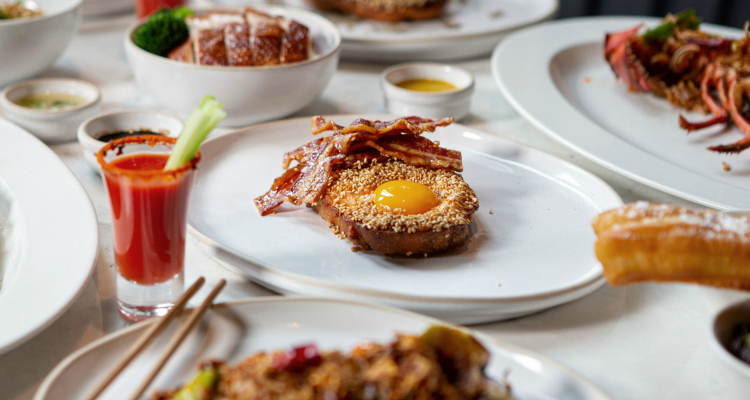 From bloody mary shots to posh prawn toast, this is brunch... but not as you know it.

Before our glasses had the chance to run dry, our waiter was over with a bellini refill each and every time. By the time pudding came around, we were sufficiently stuffed and sloshed in equal measure. With layers of light and airy cake piqued with citrusy yuzu, cinnamon ice cream and crunchy bite-sized wafer, dessert was just what we needed before rolling on home.

In need of a new brunch spot? Kym's is well worth a visit. £45 is certainly not cheap, but with impressive food at every course and added touches like bloody mary shots alongside faultless service, this is one for daytime dates, fancy birthdays and more. Plus with flowing drinks setting you back just £15, you'll certainly get your money's worth.

Kym’s lobster brunch costs £45 per person plus £15 for 2 hours of free-flowing beer, wine or bellinis. And for more brunch inspo? Feast your eyes on our handpicked guide to the best brunches in London.