Vaguely Arabian Nights: We Went Panto With Aladdin And The Feast of Wonders

The latest Vaults extravaganza from design studio Darling & Edge, Aladdin and the Feast of Wonders is certainly not your classic panto. Taking a clear aim at cultural stereotyping from the off, enter the somewhat Asian-inspired land of Agrablahblahblah, where Widow Twankey and her son Aladdin run their popular launderette - White Washing. Subtle it ain’t, but funny it is.

We kick off with some jewel-inspired cocktails from the bar. I opt for the Onyx (£9), a mesh of Harvey’s Stout, prosecco and lychee, while my friend goes for the Amythest (£9), which fronts lemon, Maraska maraschino, violette, gin and a kiwi garnish. One sweet, one sour, they’re an enlivening little warm-up to the first course. 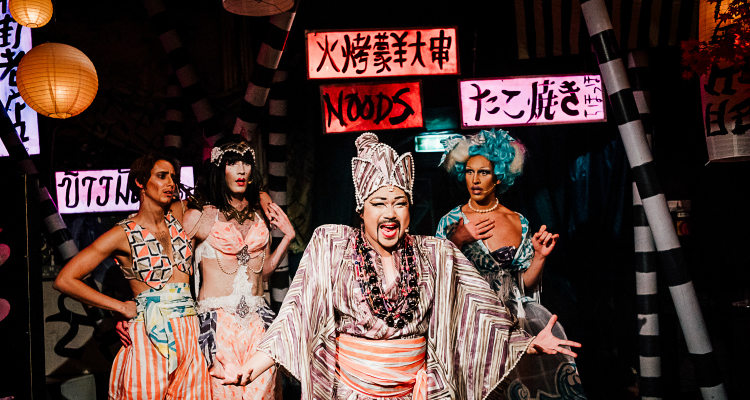 The classic panto is given an adult upgrade courtesy of a hilarious cast.

Sat around in White Washing we’re brought our first dish of the night courtesy of long-time Vaults collaborators Pop Co. Labelled on the menu as ‘Mama’s Noods’, we’re given takeaway boxes of tamarind soaked rice noodles and colourful vegetables.

Darling & Edge may have given the space a lush, neon makeover, but the show itself is the pure panto energy, played out by a cast of suitably silly characters with some God-tier innuendos up their bustles. Aladdin is in fact the only one who gets to keep their original moniker as Jasmine becomes Jizzmine, Widow Twankey becomes Mama, and as for Jafar?

Once all the key players have been introduced and the story is underway - you know the drill: street rat finds lamp, goes to the palace, meets the Princess, etc. - the fun really starts.

We’re taken into a larger dining room - this is where the Feast of Wonders happens. The action takes place between courses of coffee-roasted carrots with a verbena harissa yoghurt, sharing dishes of beef tagine and a delicate rose and cardamom mahalabia sprinkled with dried rose petals and toasted pistachios. 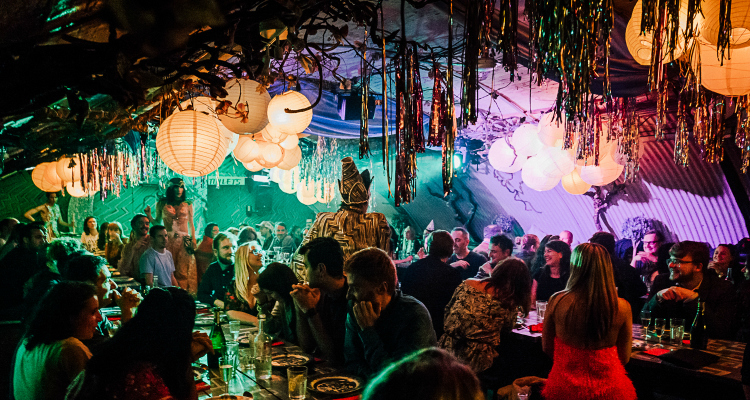 Alongside the show you'll enjoy four courses of delicious food.

There’s loads of opportunities to get involved in the action, from talent competitions and cat-walking, to helping Aladdin craft the ultimate chat-up rap to capture the heart of Princess Jizzmine. I’d also say, bone-up on your turn-of-the-millennium movie references because this night seems quite specifically aimed at those who know the cultural significance of the question, ‘describe your perfect date’.

The actors are impressively sharp, with a comeback for everything you throw at them. Whether they’ve stopped you for a chat, or you’re the drunk heckler that loudly sympathised with Jaclose’s gluten intolerance, they keep the energy high right through to the happy ending.

Aladdin and the Feast of Wonders is a pantomime for the thoroughly modern theatre-goer. Mixing drag, comedy and an eclectic selection of eats, and even a little slapstick, it’s probably one of the silliest Christmas pop-ups in London right now, and, on that basis alone, should not be missed.

Aladdin and the Feast of Wonders runs until the 15th of January 2020 at The Vaults, Leake Street, London, SE1 7NN. Tickets start from £40.