I love scandal. I mean, who doesn't? The celebrity section of my daily news app gets thumbed more frequently than…well, than I’d like to admit. And so in the month that saw the passing of Christine Keeler, the former model at the centre of the Profumo Affair, a sixties political scandal that rocked the nation (...Google it, folks), it made perfect sense to go down and visit the place where it all began: Disrepute in Soho.

Built on the site of the notorious Pinstripe Club, 'Disrepute' (or D.R.P as the cool cats call it) is a private members cocktail bar off Carnaby Street, and non-members are only allowed in with a booking; the doormen are well-trained in saying no to passing Soho hopefuls. The owners (of Barrio Bars fame) revel in the venue's scandalous history: ‘An infamous institution,’ reads ‘The Pinstripe Club’ section of the menu, ‘where the social elite, celebrity and political classes rubbed shoulders with dancing girls, fashionistas and musicians.’

Our host greeted us and we were led down to the basement below. Immediately transported into another world, the ornamental lamps, the bejeweled mirrors, the well-manicured carpeted floor and the velvet booths all ooze swinging sixties glitz and glamour. The bar sits centre stage, immaculate and golden. If that bar could talk, I thought. To the left, a stone cavern room full of couples drinking and, to the right, more velvet seating complete with smaller, secretive nooks and crannies. They also boast two large vaults complete with pink neon roof lighting, perfect for those larger and naughtier gatherings. 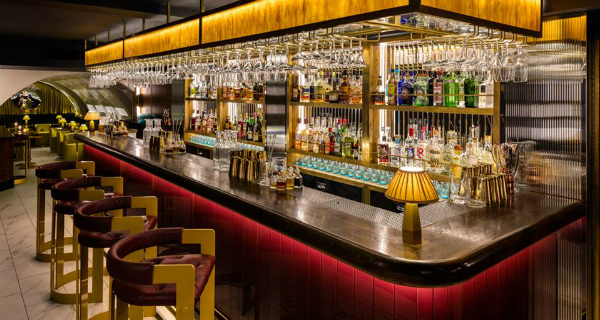 After being seated, we're informed that former patrons include Peter O’Toole, Oliver Reed, Steve McQueen, George Best, Audrey Hepburn, Marilyn Monroe…the list of suave A-listers goes on. And, of course, it’s the place where Keeler met John Profumo, an episode that eventually downed the Macmillan government (seriously, Google it). This place is steeped in history, from the building to the cocktails.

Every drink is teased with an accompanying quote. You won’t find ‘Sex on the Beach’ in this menu, oh no (although I would like to read that story), the drinks here are sophisticated and expertly crafted; the kind your mum would call “a bit posh”. One of the standouts of the evening, The English Rose (£12), read the following:

She sits at the bar, but not waiting; certainly not…She turns, her gaze piercing as she catches someone’s eye in the chaos; leaving with it a curiosity, a longing. – English Rose

While some may dismiss this as being pretentious, I bought into it. It’s fun, charming and makes choosing a drink that little bit more entertaining. The drink was crafted with Absolut Vodka, Mateus rose reduction, lemon, soda and garnished with rose petals. It’s not only delightfully refreshing but stunning - beautiful, even. It's the kind of booze that makes drinkers from other tables unfaithful to their own cocktails. Order this for your date and you’ll probably get a second one.

However, the Colonial Cup (£11.50), made with Wild Turkey Bourbon, Amaro di Angostura, spices and soda was my favourite of the night. Taken from the second section of the menu titled Screws of Convenience (‘Drinks as seductive as a secret tête-à-tête', the menu reads), this cocktail is a welcome variation on the Julep classic. The natural spicy sweetness of the bourbon isn't drowned out by the accompanying bitters and spices, but rather boosted by it. A must for whiskey drinkers.

We finished off with the Stone Heart (£12.50) from the ‘The Pinstripe Club’ section - one that demonstrates D.R.P’s experimental flair. Made from Hennesy Fin de Cognac, House Peach Cognac, Benedictine, Kamm & Sons and Peychaud’s bitters, this combination of flavours was unlike anything I’ve tasted before and well worth trying if you’re feeling a little daring. Then again, Disrepute is a bar made only for the daring. 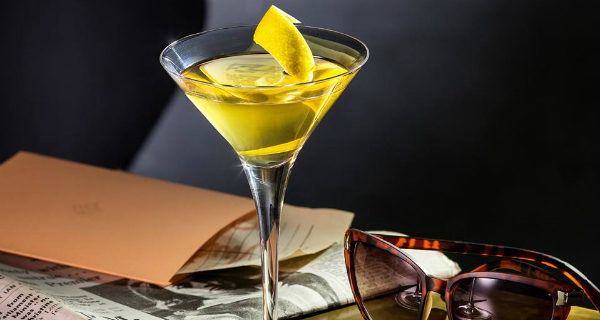 The cocktails are just as seductive as the bar.

Unlike the upmarket bars where you're more likely to run into the cast of Made In Chelsea, this isn’t a place to be seen in; it’s a place to disappear in. Undoubtedly one of the best date locations I’ve come across, it's also perfect for a lavish bash with close friends; a night in those vaults could easily be the setting of some sordid story you never tell your grandkids. I’d love to recount my night in even more detail for you, but I'd be breaking the code. What happens in Disrepute, stays in Disrepute.