London loves a quirky bar, and you know what? So do I. So it was about time I paid attention to the quirky flag flying bar - and London’s first arcade bar - Four Quarters. This Peckham establishment has done so well it recently opened a second venue in Hackney, so despite living literally on the other side of London, I felt it was about time to head down to the original recipe venue and see what all the fuss is about.

You’ve only got to take a step inside Four Quarters to see it’s a kitsch-lover's dream. Walls are smothered in vintage posters, multi-coloured fairy lights hang from every crevice, and bright lettering saying ‘beer’ and ‘drink’ hang randomly from the ceiling. There’s also the ‘Confession Box’ emblazoned on a sign that looks like it’s been plucked from the seventies, with burgundy curtains leading to another bar below. When we peered down, we found a dimly-lit cubbyhole full of yet more games, mini TVs and Playstations.

Then onto the arcade cabinets: Four Quarters homes over a dozen retro cabs, with every game you can think of from the 80s and beyond, as well as game consoles and pinball tables. The opposite wall is used as a huge projector for games like Mario Kart (and occasional film showings) and small circular tables with beer barrel seats are scattered around if you want to sit down after a gaming session.

They’ve nailed the look - nostalgic and kooky, which is what you’d expect from a cooler than cool arcade bar. When we arrived (7pm on a Friday) the bar wasn't too busy, with a few people chilling out playing games, but as the evening went on the bar became packed. The crowd was mainly twenty-somethings unwinding with a few games after work, or having drinks or a cocktail before heading out on the tiles. This made for a buzzy, excitable atmosphere. 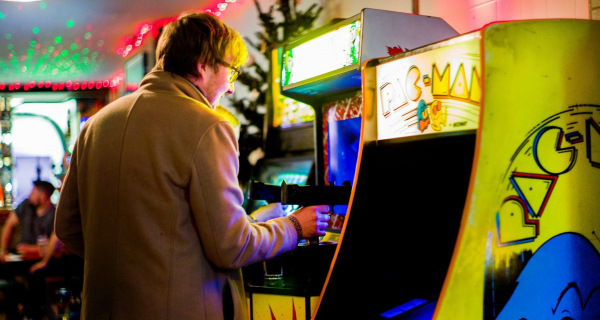 Vintage arcade cabs are the name of the game at Four Quarters.

Although there was a private party when we visited, we were able to try the Confession Box cocktails exclusive to the downstairs bar. My friend opted for the the Green Mile (£9), a fruity number combining Larios gin, Midori melon liqueur, lime and sugar, which was sweet and dangerously drinkable. I decided on the Rum Forrest Rum (£9), which was a potent yet smooth mix of Havana 3 Year Old, Wray and Nephew, lime juice, sugar, orange juice and rhubarb bitters.

Suitability boozed, we turned our attention to the food menu with the question: what do you want when you visit an arcade? Heaps of American grub, of course. Four Quarters' food offering covers hot-dogs, loaded fries and nachos; and as we were working on our winter bodies, it made sense to sample all of the above. After admiring the tongue-in-cheek titles named after historical figures, my friend went for the Piggy Stardust (£7.95), a frankfurter packed with melted cheese, fries, jalapenos, ketchup and mustard in a brioche bun. Whereas I went for the Chairman Pow (£6.95) served with jalapeno relish, chipotle mayo, jalapenos and red onion. Both hot-dogs were sent from comfort food heaven: the chunky sausages were covered in fresh, zingy and homemade toppings and they far surpassed your bog-standard hot-dog.

Properly pigging out (it was a Friday after all), we also went for a Meat Burns (£5.95): fries with bacon, chipotle mayo and jalapenos, and Nacho Chi Minh (£5.95): nachos with cheese, mozzarella, avocado, salsa and sour cream. Another two comfort food heavyweights, they were both so tasty, we didn’t care about the calorie count.

With Four Quarters craft beer selection being second to none, it would have been an absolute crime not to try a Brick Peckham pale ale (£4.70) - a fruity ale with floral flavours - and a Meantime London lager (£4.60) - a hoppy yet smooth lager, which were both perfect with our food. 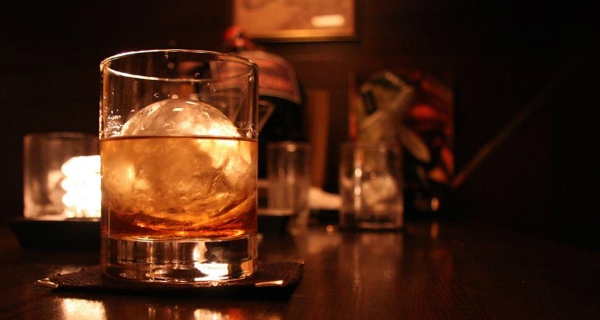 Crafted cocktails are king in the underground Confession Box lounge.

If you live nearby, you’re insanely lucky to have such a cool bar on your doorstep: to either unwind in or go hell for leather come the weekend. Whether you’re a massive gamer or not, Four Quarters Peckham has such a great atmosphere and feel of nostalgia that it’s definitely worth a visit. Even if that means travelling from the other side of London - you won’t regret it.