Going up The Shard fillls me with that giggly glee you only get when you’re a child: the views are spectacular, you can see it from nearly everywhere in the capital, and it’s a really, really big building. So obviously I wasn’t going to pass up the opportunity to head up to the exclusive Aqua Shard – and while I appreciated the views, it was only right that I enjoyed a cocktail or two.

I always feel a bit apprehensive heading up to bars like Aqua, being a simple Essex man who talks like a simple man, I tend to feel a bit out of place. But the venue is a lot more welcoming than other ‘fancy’ bars, with universally friendly staff and the happiest manager I have ever seen, dotting around to tables and chatting away to happy drinkers. That’s the vibe here: you have to make an effort clothes-wise, but generally, everyone’s welcome.

Which is great, because you won’t want to miss out on the views. The seating sprawls through the entire venue, from the stairs that acts as the floor's centrepiece, all the way round to the restaurant and bar. No matter where you sit, you have a spectacular view of the London skyline that spreads even into the toilet itself – seriously, Aqua takes the prestigious trophy of having the best view I’ve ever seen while peeing. 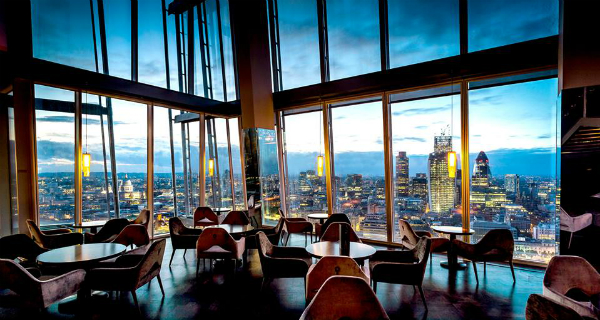 There are few places in the world that you can get a view like that.

We managed to get a prime seat overlooking the Thames and Southwark, which was absolutely beautiful even though our wash-out summer threatened the views with growls of thunder and black clouds. Regardless, excellent views are meaningless in the face of mediocre cocktails, so it was time to taste what Aqua Shard offered.

To celebrate staying open later at the weekends, they’ve launched a selection of ‘Wind Up’ and ‘Wind Down’ cocktails, so people can drink whatever one they feel they need at the time. My friend and I were going to try them all anyway, so we opted for the Wind Up ones first.

I received the aptly named Kick Start (all £16), created from Tapatio Blanco tequila, smoked chipotle, pineapple and pink peppercorn chutney, whereas my friend got the Caribbean Colada, which was Mount Gay rum, Arrak, homemade honey and pineapple cordial with coconut water. First things first, these cocktail are all beautifully presented, with the colada served in a concave glass and a carved pineapple on top that screamed summer.

The taste is there too: the Caribbean was the freshest drink of the bunch, delightfully sweet without dipping into sharp; perfect for sipping while watching over a sunny London (if it ever comes). With tequila as its driving force, Kick Start lived up to its name, and the smoked chipotle gave it just a faint kick that was further exemplified by the peppercorn. If you were lagging on a night out, this would wake you up.

After drinking those and hosting several conversations pretending we were powerful businessmen as people walked past, it was onto the Wind Down. I received the Lavender and Lime, which is arrack, infused pineapple, Italian aperitif, Maraschino, lavender and lime cordial. Served in a tall coupe glass with a giant, clear ice cube floating in the centre, it was beautiful to look at. But unlike a lot of drinks using lavender, it didn’t taste like drinking a perfume, instead giving the drink an aromatic edge. If we’re winding down, this one takes the cake.

However, the Calming Cognac was the best cocktail of the bunch. Served in a martini glass with an absinthe-infused foam on top of the drink, it felt like having a bath drinking this, though the flavours were great too, as the Cognac was strong enough to appreciate with the camomile taking off the edge. 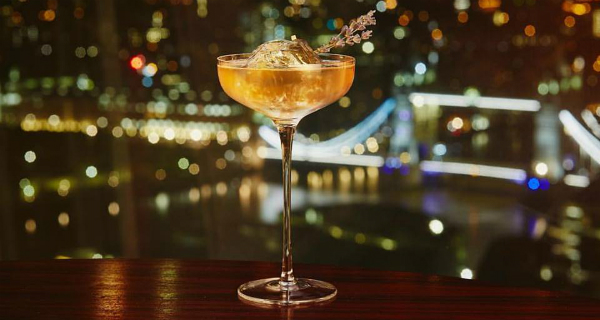 Sky high views with pretty cocktails - now that's a luxury experience I can get behind.

Looking up at the Shard, it seems more like a piece of London than a place to enjoy a late-night tipple. But now you know that all the way up the sky is an elegant space, with great views and a four-strong cocktail list to get you through any night. Come for the views, stay for the tasty tipples.