It’s been six years since I drunkenly hopped off that delayed Ryanair flight into Luton airport, and even though I've been round since 2013, I’ve still got a bucket list that grows as rapidly as the weeds in my front garden. One spot that’s been on my radar since 2017 is Bobby Fitzpatrick and after 2.5 years of postponed trips, I finally got around to paying it a visit. Zooming in on the venue’s seven-course brunch with bottomless cocktails, here’s how my long-overdue visit got me very merry before 4pm (and deluded me into thinking I was an influencer). 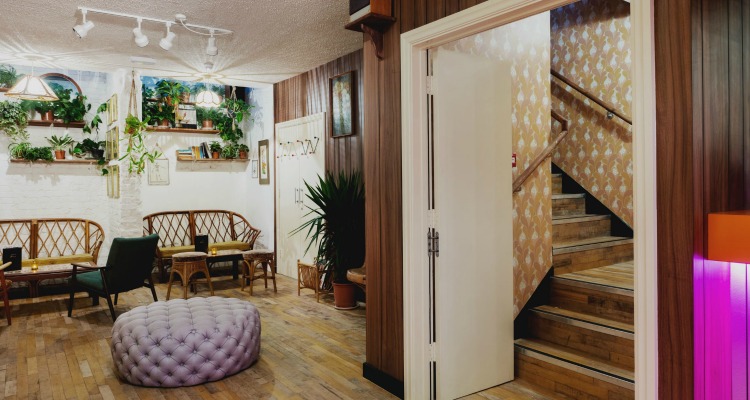 Bobby Fitzpatrick hides a den of retro furnishings and board games in their basement.

Located in West Hampstead, there’s a lot more to Bobby Fitzpatrick than just a charming postcode. It’s retro-themed and one of the most Instagrammable restaurants I’ve ever been to. Yes, that saying is flung around more than ‘I want someone who doesn’t take life too seriously’ on Hinge (pipe down, Jeremy), but by God it’s true.

Retro frames and wildly patterned wallpaper plaster the walls, and if you travel to the very back of the room, you’ll find a model kitchen with appliances from the 70s. Usually the person that's sitting in the corner sneering at this kind of carry on, we were only there 10 minutes before I took on the confident persona of ‘micro influencer’. Did people stare while I posed beside a fake fireplace and to the backdrop of those towering frames with a pout as big as Kimmy K? Yes? Did I give a fuck? Nope. As for downstairs? It's another picture-perfect floor filled with velvet furniture, wallpaper from your nan's gaff and bathrooms that will forever hold a place in my heart (I took about 50 selfies - fifty). 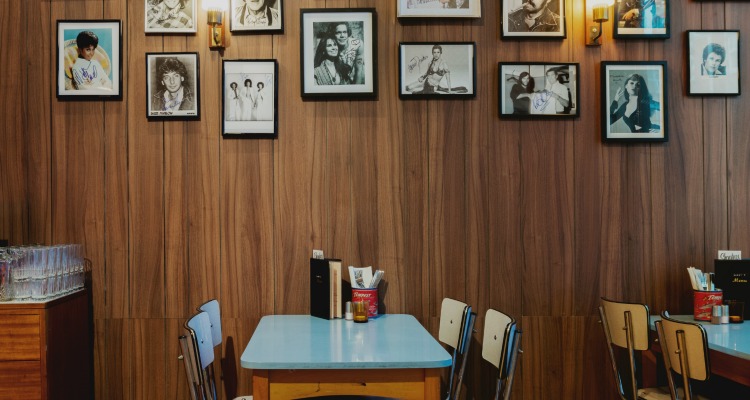 Time warp: dining at Bobby Fitzpatrick will sweep you back to 1970's London.

With plenty of reasons to visit, it's the £35 bottomless brunch that soon grabbed my attention. There's a choice of not one, not two, but three cocktails, and the coconut and pineapple mimosa is a damn delicious game changer, swapping your regular orange juice for a mix that’s reminiscent of a piña colada. Being the headliner of the three listed, we sipped this sweet mix as our first course landed on the table.

The rolled omelette was a great opener to our meal with a smoked salmon, cream cheese and spinach filling, but the next course - devilled egg with tuna, anchovies and capers - was a miss because of my profound hatred of tuna. The potato latkes had us back on top form again with a mini plate of crispy buttermilk fried chicken sitting atop fluffy deep-fried potato patties with a side of horseradish and sharp beetroot pickle. The smoked bacon, cheese and spinach crepes were in a league of their own though. Savoury with a salty kick from the bacon, I’m convinced that one bite could cure any raging hangover. The Kedgeree Scotch egg was another strong course, and the biggest of the lot with smoked haddock, spiced rice and an indulgent side of mayo pimped with coriander, curry powder and other mysterious ingredients. We were so full at this point that - would you believe - we had to skip the Sicilian meatballs. A very sad day indeed, but we managed to fly through the final course: a sugary berry pavlova with whipped cream. Funky as hell, the interiors at Bobby Fitzpatrick are anything but bog standard.

Bobby Fitzpatrick’s menu is a whopping seven-courses long and instead of your standard bubbly, they mix up tasty bottomless cocktails for your two-hour stay. For £35 folks, that is an absolute bargain. Did I look like a idiot posing for endless pictures in front of loved-up couples? Yes I did. Regret any of it? Absolutely not, and you won't either when you go (because I demand that you do). Just do yourself a favour and get down there before you see it flung across Molly-Mae's Instagram. That's when your trip will be postponed for 2.5 years like mine was, only yours won't be because of procrastination... you simply won't be able to get a reservation.