You might not think that an almost 90-strong, multi-national bar chain is the place to find grassroots environmentalists, but the Dalston BrewDog can proudly claim to be the first of its kind to go completely vegan - and they’re pulling in the crowd to prove it. When we pitch up on a Sunday afternoon there’s a group sat behind us having a heated discussion about environmental politics, and my companion is also proudly displaying an Extinction Rebellion necklace - and recently acquired Section 14 to match. 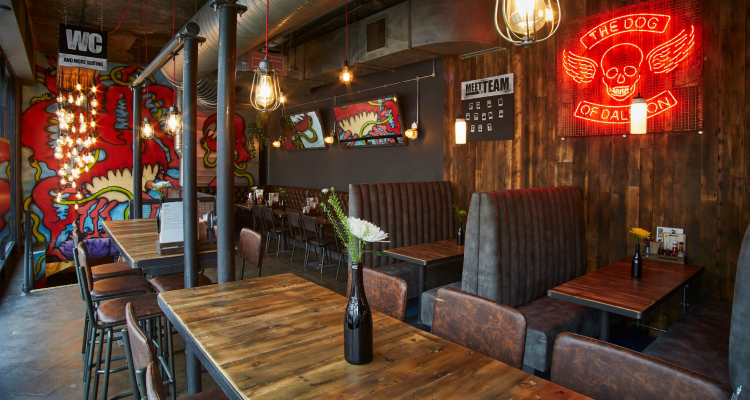 BrewDog never went down the fish-gut finings route, so their beer has been vegan since inception - bar a small handful of milk and honey-toting options. Now they’ve partnered with Biff’s Jack Shack in their Stoke Newington Road branch to make it the most plant-based pub on the strip.

Offering one of the largest Biff’s menus to date, their classic mix of burgers, ‘wings’ and loaded fries have been joined by sharing boards and an extended selection of sides. I opt for The Jack & Cheeze burger (£9.50), a deep fried patty of mac & cheeze, topped with bbq pulled jackfruit, mustard-drenched slaw and dill pickles. It’s the kind of soul-sating, carbo-loaded comfort food that would send cheeze-tainted tears running down a more hungover face than mine. And we haven’t even gotten to the Filthy Fries yet. My filth of choice is the Italia 90 - £6 for a whole tray, or you can add them to your burger for a little less - a boujee mixture of parmasan shavings, truffle oil and cubes of their ‘gnarly bacun’. Beyond the toppings though, I am forever in awe of Biff’s fries, which offer a singularly stunning level of crunch. 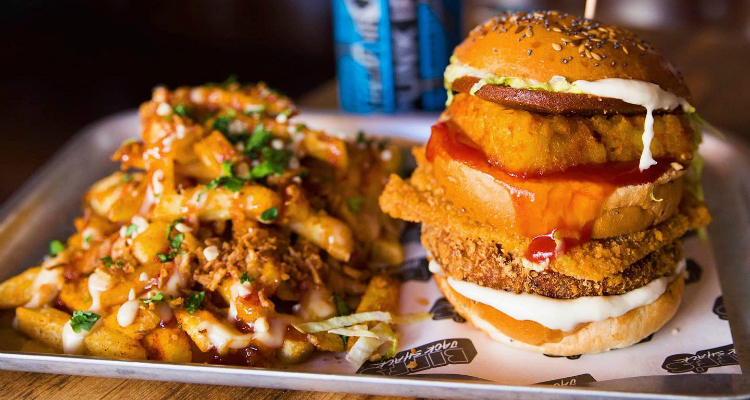 The burgers here are cruelty-free to all but your waistband.

My friend is slurping her way through the Samuel Hell Jackson (£9), a stack of jackfruit, chipotle slaw, cheeze and BBQ sauce, topped off with more maple chipotle hot sauce and jalapenos. This thing could realistically wreak a bit of nuclear destruction on your tastebuds, and yet there she is adding an extra slug of Dalston Chillies hot sauce to it - she’s got planet conservation down, but self-preservation doesn’t seem to be such a high priority. With the help of a whole water jug, her pint of Railway Porter and my Indie Pale, she manages to re-regulate her internal temperature.

If you’ve never had a Biff’s wing before, they’re basically beautiful balls of seasoned jackfruit with a sugarcane ‘bone’ at the centre. Biff's smother these little fellas in like eight different types of good stuff, from miso mayo and toasted nuts to ranch dressing and maple chipotle. We tuck into their newest offering - the Punk Barbie (2 for £6) - that sees BBQ sauce and bacun pieces get a little extra dip from a tangy Punk IPA beer cheeze created specially for the site. 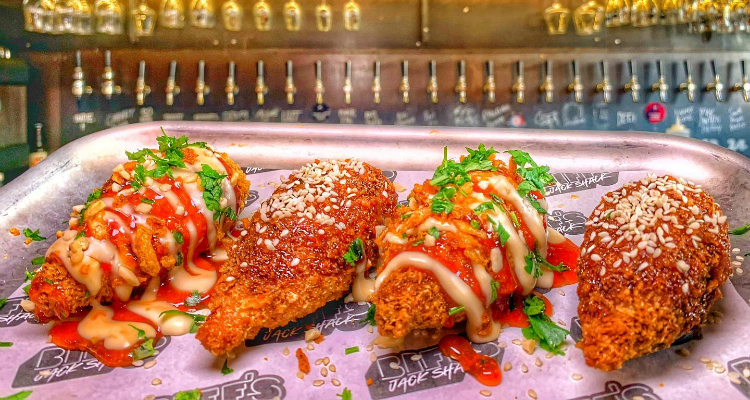 It's not a trip to Biff's unless you go a little wild on the wings.

Mixing an epic beer selection with some of the UK’s finest vegan junk food appears to be a winning combination for BrewDog Dalston. Serving up super-sized eats that will impress even the most meat-loving mouths, it’s also streamlined the process for all plant-based dieters looking to chow down without the need for a full ingredients Q&A with the staff.