Canary Wharf gets a bit of a bad rap for being soulless. That probably has something to do with all the big, scary office buildings looming over you and all the big, scary businesspeople funnelling out of them who would push you into the road if it meant getting to the DLR thirty seconds quicker. But if you say it's completely corporate and soulless, you clearly haven’t tried some of the food getting served there. Which is how I ended up in Roka Canary Wharf, the Japanese restaurant bar that's a little slice of deliciousness in a sea of grey.

I got lost on my way to Roka, but it shouldn’t be too hard to find if you're about 20% smarter than me. Find the literally giant neon sign in the window until you enter a lobby, where an obvious notice will tell you not to walk up the stairs (I did) and take the lift up to the venue instead. Once there, you are greeted with an attractive and contemporary bar, all slick wooden furnishings and panelling with floor-to-ceiling windows looking out over Canada Square. My friend and I sat on the balcony upstairs, perfect for a warm summer’s evening, with high tables and chairs to make yourself comfortable on, a bright white colour scheme, and a bar at the end.

It being Canary Wharf, the clientele leaned more on the professional side, though the ages were rather mixed. The main restaurant was pretty busy on the Tuesday we visited while the balcony was a bit emptier – maybe because a summer festival was on at Canada Square at the time, with what I can only assume was the nation's third best Kerry Katona impersonator on stage. Regardless, the balcony is quite beautiful, filled with greenery and overlooking the square, making it great for an after-work meal with friends and date night alike. 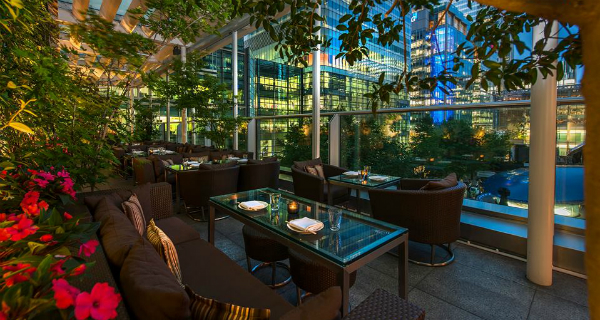 An adorable place to tuck into some delicious food.

With the sun shining and now a Take That/Queen mash up being performed on stage, it was probably time to get some cocktails down us. So before we got stuck into the food, I ordered a Sherry Old Fashioned (£11.60), whereas my friend opted for the Roka Negroni (£11.60). The Old Fashioned was the perfect antidote to a hard day at work: a light jab from the whisky accompanied by the delightful wash of the citrus. The drinks are presented to be as cute as possible, too, so get those Instagram accounts ready.

The food menu can be a bit over-whelming to Japanese food novices – I must admit that my experience with it rarely extends outside drunkenly buying boxes full of nigari at Liverpool Street Station. Luckily, the super-friendly waiters are on hand with recommendations and their expansive knowledge, so we started off with Ebi no Tempura, which was rock shrimp tempura with wasabi pea seasoning and chilli mayonnaise, accompanied by some edamame with sea salt. The shrimp was very tasty and the mayonnaise was my second favourite sauce of the night, but the star here was the batter, which was perfectly cooked and seasoned. It was a strong start.

The dishes kept coming though, so we moved on to a selection of sushi. A perfect opportunity to humiliate myself by attempting to pick things up with chopsticks, the stand-outs ended up being Sake to Avoado maki (salmon, avocado, asparagus and wasabi tobiko), Maguro no Prikara (spicy tuna, avocado with a small dollop of jalapeno mayonnaise on top). While trying to raise it to my mouth with the hand-eye coordination of a sentient puddle of water was the most challenging aspect of the night, the sushi was all delicious, with the sake to avocado acting as a wonderfully fresh counterpart to the spicy and flavoursome spicy tuna.

But enough teasing, the hero of the night could only be one thing: the Kampachi Sashimi no Salada. It’s one of the only dishes that has stayed on the menu since the Roka chain first started, and there’s a reason for that. The dish consists of yellowtail sashimi with a yuzu-truffle dressing and a small salad in the middle. Oh-Em-Gee, this was tasty: not only was the fish the very figure of freshness, the strong, sharp and slightly sour sauce was absolutely delectable, to the point where I was mopping it up with the small salad at the end. If you’re only stopping by for a few dishes, you must eat this. 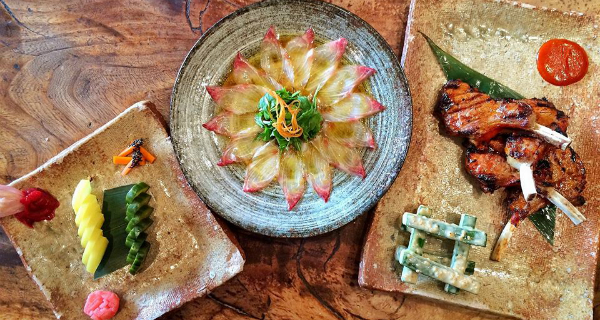 Not only fantastic on the palate, I can confirm it's the easiest thing to pick up with chopsticks.

While Roka Canary Wharf isn’t boasting quirky interiors and whacky dishes (though they have a cracking balcony), they have one thing on their side: flavour! Canary Wharf is yet to shake off its dusty businessman reputation, but with food this good on its side, that’s a really good start.