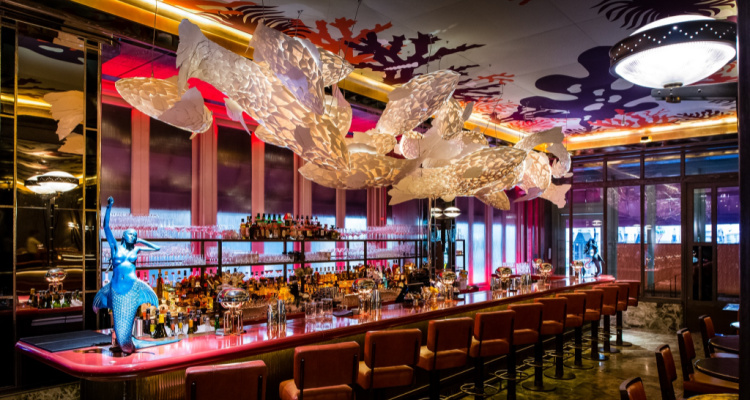 Put it this way, if your date took you here, you know that it’s getting properly serious.

Word on the street is that upmarket diner Sexy Fish is opening a second restaurant in Manchester, and it’s more fancy pants than you could ever imagine.

Originally located at Berkeley Square in Mayfair with Michelin-starred chef Bjoern Weissgerber at the helm, this new spot is hotly-tipped to take over the Armani store in Spinningfields Square, above Australasia.

We’re still awaiting further details but if it’s anything like the London establishment, expect ornate décor and mammoth coral reef aquariums (two of the largest in the world, don’t cha know), plus high-quality Japanese-inspired plates including caviar and oysters. We’re anticipating their famed Robata grill to feature too. It wouldn’t be Sexy Fish without their resident DJs, so get ready to be taken from PM to AM to the soundtrack of the slickest tunes. Fancy a drink? Think swish cocktails paying homage to the tastes and sights of Japan and signature whiskies aplenty.

Although hitting the headlines in 2020 when Jess Glynne posted *that* comment about being refused entry for wearing that tracksuit, there’s no denying that this latest Sexy Fish instalment is next level and reserved for the most special of occasions.

Sexy Fish is tipped to take over the Armani site in Spinningfields after the fashion store closes its doors in August. Seeking out the latest new openings in Manchester? Head over here.

Listen Up Manchester: We're Getting Our First-Ever Rum Garden And Distillery

Email Marketing Manager at DesignMyNight. Lover of all things potato-based but for god’s sake leave out the onion. Generally found listening to indie landfill and scouring the web for bargain holidays or the best festivals.

Listen Up Manchester: We're Getting Our First-Ever Rum Garden And Distillery