A Quirky Hotel Stay With Rainbow Interiors, Arcade Games And An Underground Spa

With properties in Bilbao, Madrid, Milan, Munich, Prague and Tel Aviv, it comes as no surprise that London was next on the agenda for NYX. Just after celebrating their first birthday, this Central London location was the first in the UK, and let me tell you - they didn’t hold back. Named after the Greek goddess of the night, this boutique hotel has a bold and free spirit showcased in everything from its vibrant interiors to its late night menus. Equipped with an underground spa, bar, restaurant and a 360-degree rooftop, it has everything you’d need for an unwinding escape in the city. From dips in the pool to a meal in their restaurant, here’s what happened during my weekend sleepover at NYX Hotel London Holborn. 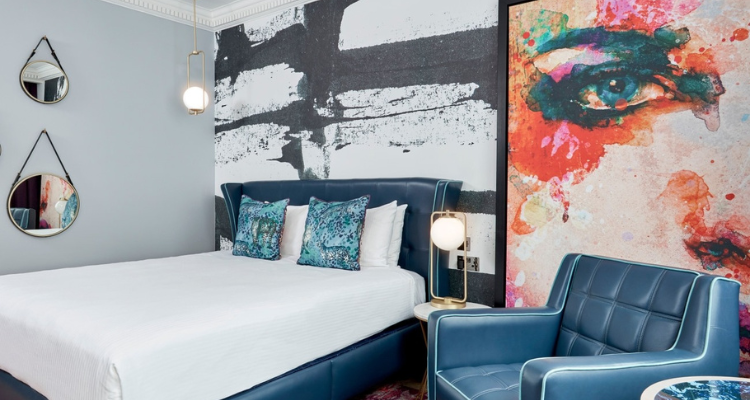 Pulling up with my wheelie suitcase on a scorching Saturday, the first thing we noticed about NYX Hotel London Holborn was the 10-story mural snaking its way up the side of the building. This arty and confident personality isn’t just confined to the brick walls outside. Neon pink signs, leopard print cushions and cherry blossom trees are only a handful of quirks I spied in the restaurant/bar area while making my way to the check-in desk. Securing early check-in, and with our key card in hand, we made our way past the bar to the elevator where we came across yet more funky bits and bobs, including two retro Pacman arcade games worthy of Four Quarters (if you know, you know), a free photo booth and a DC-decorated statue with references to Batman in comic-book-style speech bubbles. When it comes to interiors, NYX understood the assignment. 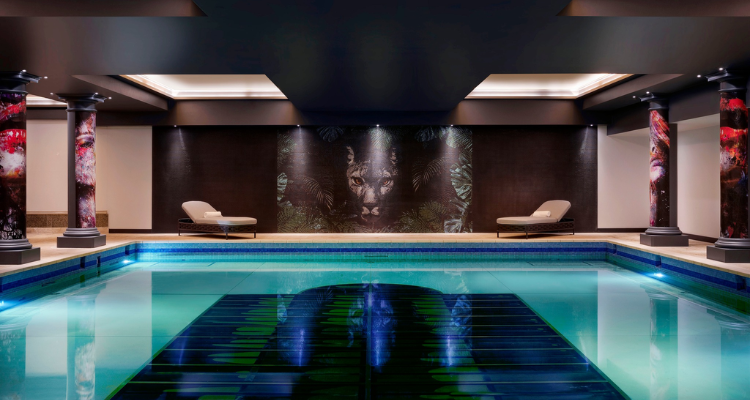 After your massage, sink into the hotel's Greco-Roman pool for a leisurely swim.

Zipping up to the 7th floor, NYX’s Superior Room was our home away from home for the night. These rooms come equipped with plenty of runway space for outfit displays and a super king bed for premium snoozing. Bright and spacious with some skyline views if you crane your neck far enough, our room had everything you’d expect, and it came decorated with a large free-standing painting, thick royal purple-coloured curtains and circular mirrors. My favourite feature has to go to the mini red SMEG fridge that was stocked with all the favourites including Sipsmith tinnies. Obligatory unpacking, backflipping onto the mattress and snooping in the mini fridge out of the way, we popped back into the elevator until we reached Rena Spa.

With a Greco-Roman pool, steam room and sauna and a list of treatments the length of your forearm, this underground hideaway is more than worth knowing about. Booked in for the winemakers massage that recreates the ritualistic steps of the wine-making process on the body using bare hands and a special massage rolling pin (£95) and the deep tissue massage (£105), it wasn’t long before our forms were taken and we were both escorted to a dimly-lit room with a subtle hint of incense. 60 minutes later, we poked our heads out of the massage bed, wrapped ourselves up in fluffy dressing gowns and floated to the relaxation area to debrief. Not much was said other than ‘I feel so relaxed’ and ‘I can’t believe I was just massaged with a rolling pin’. 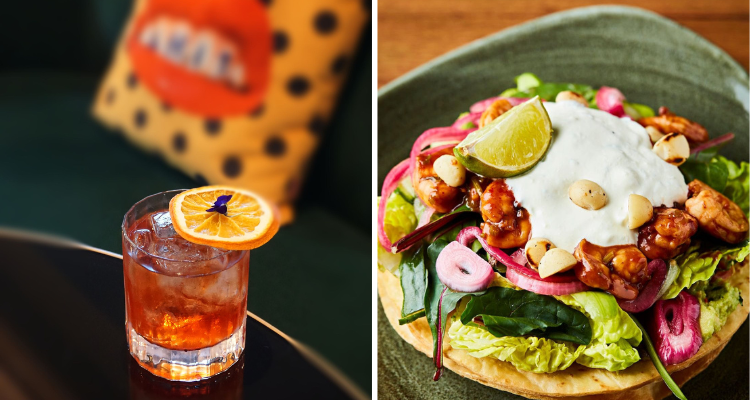 Peruse the menu of cocktails and lip-smacking starters until the early hours.

Several dips in the pool later, we made our way back up to our room to get ready for dinner. To start, we had the tequila and chipotle prawn tostadas (£10) and the seared scallops with black pudding, cauliflower and chorizo oil (£12.50). The tostadas were big enough to share between two with a fiery kick and lots of guacamole while the scallops were a lighter option with a creamy bed of cauliflower adding some extra texture. Our plates were cleared to make way for a sirloin (£28 for 227g ) with peppercorn sauce and the king prawn katsu curry with coconut rice (£17). Although it didn’t blow me away, the curry was an interesting take on the classic dish with the sauce coming in more tangy than savoury. My partner had the steak and while it wasn’t enriched with much flavour, the peppercorn sauce provided the meat with a much-needed pick-me-up.

Mains out of the way, we made sure to leave room for the finale of the evening: dessert. There were plenty of twists to choose from but the peanut butter cheesecake (£8) and NYX arctic roll with chocolate and mango (£8) were clear winners. The cheesecake had a thick biscuit base and the arctic roll was an unusual combo of flavours with a soft sponge layer cushioning the ice cream. No meal (in my eyes) is complete without a cocktail, or mocktail if you will, and it’s not hard to see that NYX has injected their fun personality into the drinks offering too. My boyfriend ordered the Bourbon Bufalino (£11) but being a die-hard tequila fan, I ordered Two Smoking Barrels (£13). Mixed with El Jimador reposado tequila, fresh lime, agave syrup, and Lagavulin, this cocktail was as refreshing as they come with a sea salt rim and plenty of ice.

Outlandish interiors, emergency packs in the bedroom containing paracetamol and condoms, a Greco-Roman pool, and old school arcade games? If there’s one thing you can give NYX Hotel London Holborn, it’s that they’re not afraid to be different. Between the underground swimming pool and the upbeat bar, we walked back into the bustling streets of London feeling lighter on our toes and thanks to the hotel's emergency packs, no pending hangover. This hotel gives you the tools to curate your own stay in the city, whether that’s based on relaxation with dips in the pool and hour-long massages or debauchery at their rooftop bar and late-night restaurant.

Sake & Skewers: We Tried The Omakase Tasting Menu At This Marylebone Restaurant

Sake & Skewers: We Tried The Omakase Tasting Menu At This Marylebone Restaurant