I was with a friend recently who had the temerity to suggest he couldn’t find any decent, quintessentially British afternoon teas to take his visiting Italian mother to during her trip to London.

His poor mum. There are loads.

From swanky restaurants to literally every half decent hotel in Zone 1, we’re a city positively overrun with crustless sandwiches and clotted cream-soaked scones (or ‘scones’ if you’re from the North) - which is probably what makes Aquavit London’s Nordic take on the humble art of afternoon tea all the more interesting.

The sister and newer venue to its Manhattan counterpart (the iconic two Michelin-starred Restaurant Aquavit), Aquavit London is inspired in every aspect by the style and tastes of the Nordic regions – from its no-expense-spared design courtesy of Swedish born Martin Brudnizki, its shmancy Georg Jensen silverware, to its Scandi wall-mounted designs from Olafur Elisasson.

Although the ethos of this place hints towards a more casual market, the enormous golden light fixtures, quirky ornamental fixtures and splattering of brasserie-style seating ensure the atmosphere you experience here is an exclusive one. 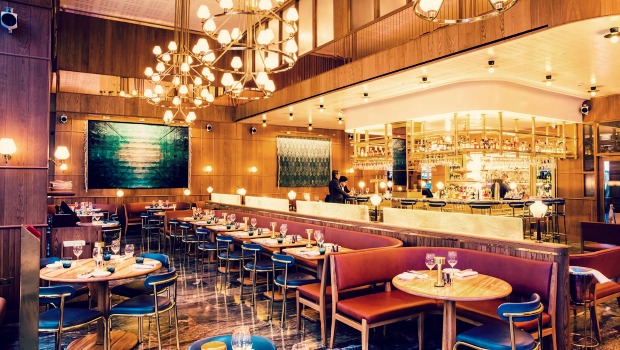 Aquavit London is an all-day restaurant with luxury in mind.

Scones are great and there ain’t nothing wrong with a little cucumber sandwich every now and again, but you can forget any signs of traditional English flavours at Aquavit; instead, their menu is made up of delicious fresh fish and lighter accompaniments, with the savoury elements of the lunch smothered over an authentic slice of Smørrebrød – a traditional rye bread hailing from Scandinavia.

For the first round of food, you’re served a selection of the Smørrebrød, featuring fresh gravlax tartare, an aromatic shrimp skagen, and my favourite, a beautifully presented venison tartare so intricately-balanced and tasty I’d consider swapping my future first born for a few more slices. Expect to be slightly fuller than anticipated as you move onto the second and last serving; Aquavit’s own take on a few traditional Nordic sweet favourites - mini semla, a bright green-coloured ‘punsch roll’ and authentic chocolate fondant balls, served with a side of Swedish biscuits for good measure. When looking at the menu, it doesn't look like a lot of food; but the servings are generous and there's a lot to choose from - so even the greediest among us won't leave here hungry.

Alongside the food and as you’d expect from this sort of thing; the tea selection spans all flavours and tastes, and comes served in iconic (though slightly impractical) Georg Jensen silverware – but if you’re looking for a treat, go for the Champagne option, which also includes a glass of 2006 Moët & Chandon Dom Pérignon to toast the afternoon. 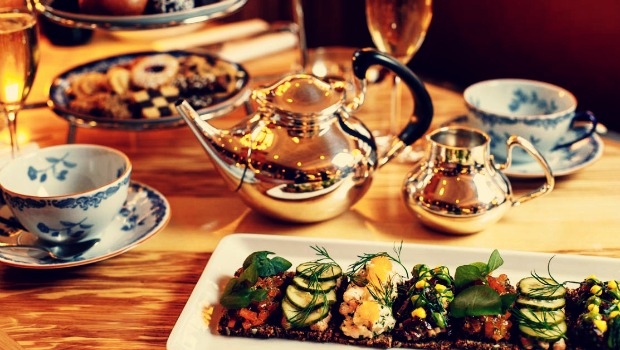 Expect a taste of Aquavit's 'open sandwich' assortments at this afternoon tea in London.

From telephones to Geri Halliwell, this country is responsible for some of the greatest exports and inventions known to man – and a good afternoon tea is one of them. Some would argue that Aquavit London’s Nordic take on this most precious of pastimes is blasphemous bastardising of a proud national treasure; but those people are wrong. If you want a traditional English affair then Aquavit’s not for you, but if you’re looking for a slightly different approach to the normal order of service, give this Central London gem a try for yourself.