Ask me about modern art, and I’ll mutter something about Tracy Emin, tents and an unmade bed. My knowledge is as in-depth when it comes to members club; if James Bond – or any John le Carré adaption – is to be believed, they are lifeless relics of a bygone era, filled with sallow-faced, loose-jowled men who have inevitably avoided paying taxes while dining on caviar or gold leaf every night. But don't believe everything you read; I went along to The Wellington Club to see how they're shaking off any fustiness with spray paint and a famous artist. 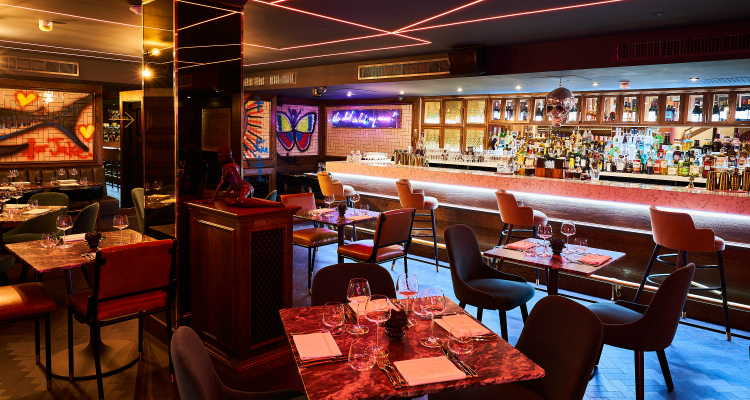 Damien Hirst has given The Wellington Club's restaurant a make over.

Damien Hirst and one of London’s oldest private members clubs seems a bit of a juxtaposition, but that’s exactly what can be found at The Wellington Club in Mayfair. That’s if you can hunt it down of course – an imposing doorman guarding an unmarked entrance is the only clue to the exclusivity from street level. Once in, it’s downstairs to a large basement which combines contradictions well; wood-panelled walls and leather seating are all very ‘membership only’, but Hirst’s liberal work with a spray paint can stops any stuffiness. There’s also not a potential 007 baddie in sight; with smart groups and couples toasting birthdays and date nights.

We start at the bar – as any good story does – with cocktails. The list is twisted and as modern as the giant glitter-ball skull that hangs from the ceiling, with tequila knocked together with chilli and mezcals muddled with honey, along with the classics. And while the drinks menu is surprisingly unique, the food menu is a sturdy, familiar British affair. Brett Duarte is chef, and as one would expect from a Gaucho alumnus, his offering centres around steak. 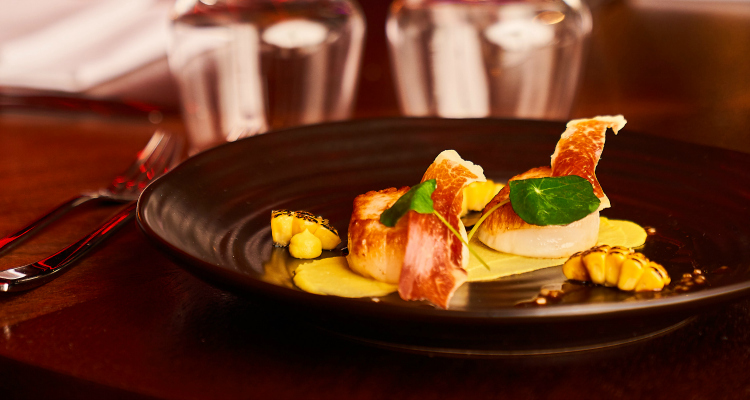 Steak takes pride of place on the restaurant's menu, alongside fish and traditional British dishes.

Before we got onto that, starters; feather light but heavy with flavour, the mackerel is two bite-sized smoky fillets, with a refreshing tang of chopped citrus fruit (£12). I've had my eye on several of the mains for a few weeks now, but our incredibly helpful sommelier tells us that the steak is unbeatable; and the 600g Chateaubriand (£60) is pretty magnificent, slices of sea-salted pink meat fanned out on a wooden board. We side it with tender stem broccoli, which has a spicy chilli kick, and fluffy, fat triple cooked chips, the latter proving extremely useful in mopping up a light chimichurri sauce.

As anyone who does not wear a signet ring or can talk about their ancestral home can testify; private members clubs are intimidating places. But push beyond those white doors and there’s a reason people pay to be there; in the case of The Wellington, it’s that the steak is sublime and the walls are covered in one of the world’s most famous artist’s works. The real value for membership fee? Cocktails that blend flavours and ingredients for interesting new twists on classics – it shouldn’t work but it does.