Standing outside the domed entrance of a grand 17th century Victorian building, I wondered what it had been in a previous life; a hotel, library, bank, school? Whatever its purpose, I imagine it was a place where only the rich, wealthy and scholarly members of the community were welcomed. Today its 20th century incarnation is a much more relaxed space based on a fictional explorer/professor, one Hettie G Watson. Part of the small chain, The Lost & Found in Birmingham scooped me up when I was lost in the city, and engulfed me into its exterior; crammed with a mass of books, maps and plants. I spent the night getting to know Hettie - and her sexy namesake - a little better. 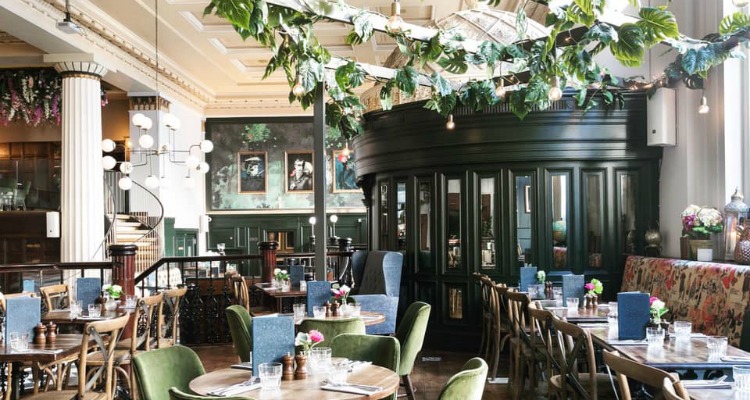 Upon entering the venue, you’re brought into a hall, at least two storeys tall giving a feeling of grandeur, with walls covered in bookcases and above your heads, canopies of colourful flowers dangle down. It’s a unique mix of Hettie's scholarly intellect and love of botany, which makes for an intriguingly rustic yet light and airy relaxed setting to chill out on the moss green and golden regal chairs, whether you're socialising, working, popping in for a drink or something to eat.

Checking out The Lost & Found on a hump day, there were a few people equally as eager for the weekend to come around, having a quiet drink and some food with friends and colleagues. As the night lingered on past 8pm, it started to pick up, bringing with it a buzzier yet still chilled vibe. While the building might be cavernous, the space is varied and filled well; from little nooks to tuck yourself into, beside Hettie G Watson herself (in portrait form), through to terraced ‘garden-esque’ raised area, which is great for groups. 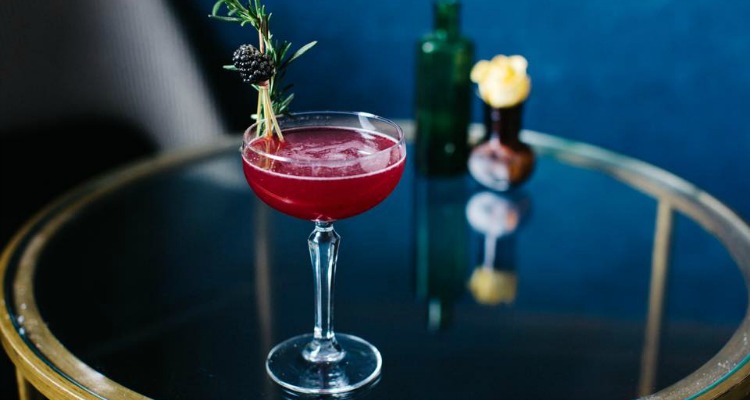 Much like the interiors, cocktails revolve around the floral and fruity.

Getting down to business I was excited to view the cocktail list and undoubtedly in keeping with the theme, the menu is split into ‘Professors’, the ‘Lost’ and the ‘Found’. Feeling rather lost in the city myself as a passing visitor, I decided to try out the Corpse Bride; Portobello Road Gin, Briottet Liqueur de pamplemousse, lillet rose, lemon juice & sugar syrup (£8.75), it was a rather sugary starter to the evenings tipples, definitely one for the sweeter toothed of us. Second to take my fancy and needing a less sweeter beverage to balance my palate was the Wasabi Crush; Monkey Shoulder Whisky, Briottet Pain d’Epices, wasabi paste, pistachio syrup, orange juice & lemon juice, Angostura bitters (£7.95) - this certainly took the tart edge off, with a strong wasabi hit with every slurp, my sense of taste and smell were truly opened. It’s quite a heavy drink and not one for the light hearted sippers. Saving the best to last, I ordered the signature cocktail Ms Hettie G. Watson - Martin Miller’s Gin, Briottet Liqueur de Pamplemousse, Ms. Better’s botanical foamer, rose water, lavender syrup, lemon juice & sugar syrup (£8.50) - this was a lighter floral, zesty drink, served in a delicate Gatsby-esque Champagne glass - a very fitting cocktail to the portrayed theme of the bar.

The Lost & Found's interesting concept within a former bank certainly adds more creativity to your usual bar and definitely deserves a visit or two to taste as much of the inventive cocktails from the Lost, Found and Professor menus. Whether on your own and tucked away in the corner or underneath the canopy of plants with a group of friends, it’s a gem of a bar to both find and get yourself lost in.

Collins Customer Success Manager. Lover of a strong gin cocktail (pref. Negroni), trawling food markets at the weekend and exploring London looking for the best coffee and cocktails in town.