It's Murder On The Darts Board: We Put Our Skills To The Test At Flight Club

Darts was never a game that particularly appealed to me. As someone with the coordination of Mr Blobby trying to fight a wheelie chair, it’s never really felt like an advisable past-time. But now Flight Club, a bar kitted out for “social darts”, promises so much more than the game the speccy kids at university used to play in the SU.

From its dark green and red-tiled exterior, you’d be forgiven for thinking Flight Club was just a pub, but venture inside and you’re in another world entirely. Lavish red and gold interiors come decked out with carnival lights and colourful hoardings, giving the place the feel of an old-fashioned fairground - if you ignore the high-tech dartboards and flashing TV screens that line the walls that is. 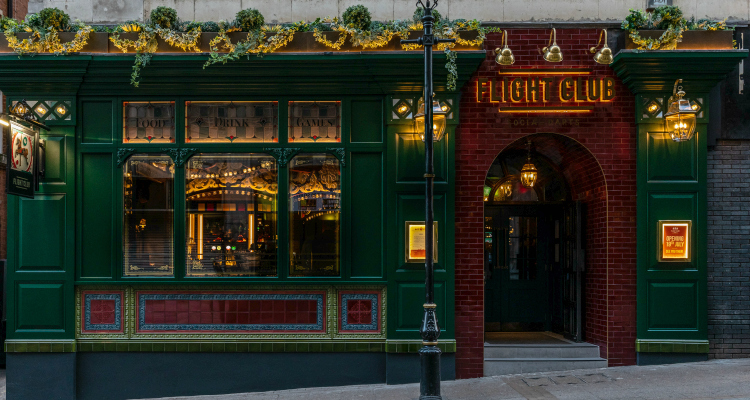 Don't be deceived - this Temple Street pub is not what it seems...

We were shown to our oche and given a quick tour of the touch-screen tablet, where we could choose our games, keep track of our scores, and request food and drinks. Before we began, we had our photos taken on a small webcam located around chest height above the tablet. The resulting photo – a monstrosity which provided a great view of my double chins and the inside of each nostril – is attached to your player profile and flashes up on the screen every time you win or lose a game. Another camera above the oche enables you to take selfies and Boomerang-style shots throughout the night, which are emailed to you the next morning. So a word to the wise: be selfie ready.

Unlike traditional darts, which seem to involve lightning-fast subtraction skills, Social Darts does all the hard work for you; instructions are clearly presented on the tablets and each dartboard is fitted with a sensor to calculate your score. There were five games on offer: Demolition (a variation on the classic 501 set-up), Snakes and Ladders, Shanghai, Quackshot (effectively Shooting Ducks) and Killer. We got off to a…slow start, during which time two of my three darts failed to hit the board and ended up tailless, but we soon got the hang of it. The games are super simple; perfect for a novice like me, and 90 minutes in the oche gave the two of us enough time to play at least two rounds of each game. 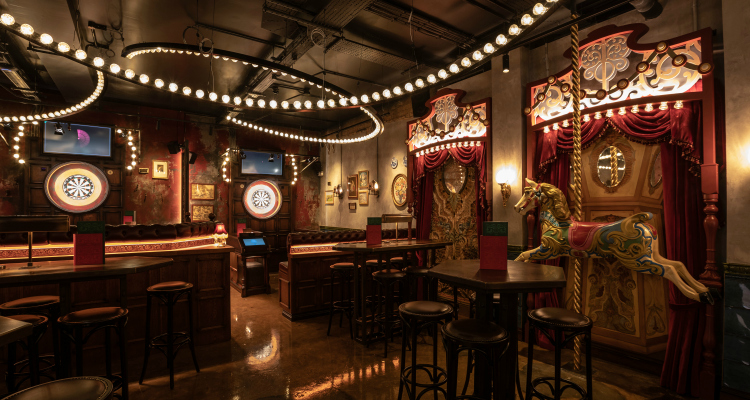 Fairground interiors give way to one of the most high-tech darts experiences in the country.

Friendly staff were keen to bring us drinks and snacks at regular intervals. We were shown a drinks list as long as my arm, but opted for mocktails under the justification that adding alcohol to poor coordination would probably result in a maiming. The Nojito (£5) was wonderfully refreshing: sweet passion fruit tempered with lime and a savoury hint of basil. We loved the Peached Iced Tea (£5) too, a much drier mix of grapefruit, peach, and fragrant jasmine green tea.

Food-wise, we ploughed our way through crisp salt and pepper squid (£7.95); moreish, aubergine tacos (£6.95) with a chin-dripping fruity salsa (best shoved whole into your mouth) and a whopping paddle of Med veg pizza (£14.95). However, I’d advise saving the snacks for after, if you can. While shovelling vegetable gyoza (£5.95) into your face is a great way to keep hands busy as you wait for your turn, the game loses its appeal slightly when the darts have acquired a sticky slick of second-hand sweet chilli sauce. Nevertheless, they’re exactly the sort of sociable, snacky dishes you’ll need to keep going round-after-round. 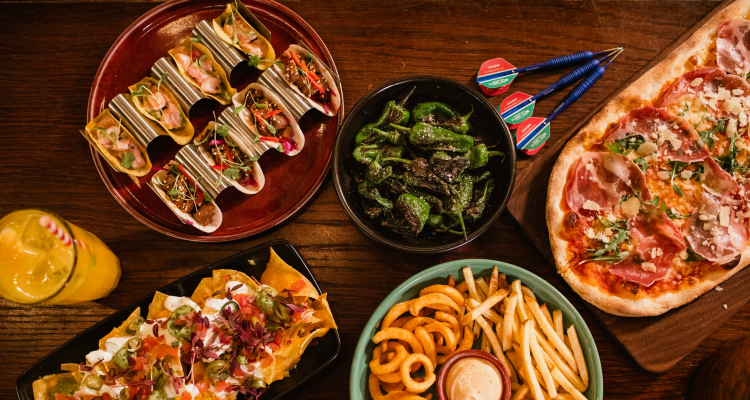 Flight Club's selection of snacks and sharing pizzas are sure to fuel some friendly competition.

A welcome addition to Birmingham City Centre, Flight Club offers a seriously fun night out whether you’re trying to prove your sporting prowess to a date, or messing around with a mate. It would also make a great leveller for a work do: Sharon may have risen up the ranks to middle management, but that says nothing about her shoddy darts skill. The food is great, and the drinks are fabulous, but the darts are what you’ll stay for, so head down for a night of hilarity, stress busting and friendly competition. I’ll be darting back in no time.

The hungriest of hippos, based between Birmingham and London.