Grand and rustic at the same time, the latest addition to the sought-after Hardman Square definitely isn't shy. With neighbours as chic as The Alchemist, Tattu and The Refinery, the brand new Bill's Spinningfields has a lot to live up to. So we were on a mission to find out if it would. 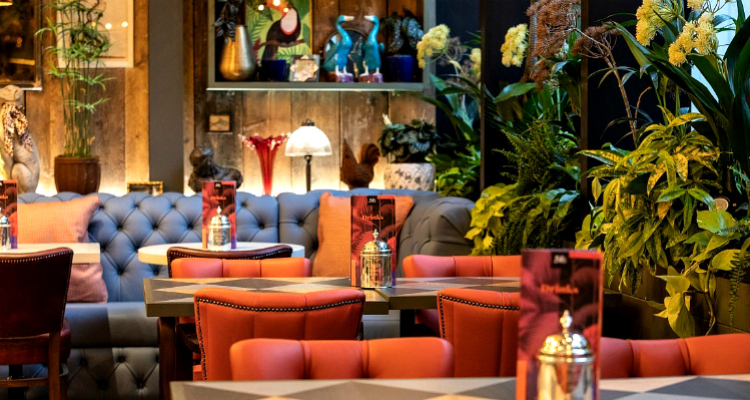 Leafy touches and vibrant colours give Bill's an exotic edge.

A decadent, tropical wonderland, Bill's sees ornate chandeliers hang from the ceiling while foliage adorns the walls. With a kaleidoscopic range of colours, artsy prints of toucans and blush pink and green seating, this is no wallflower. A statue of a dog wearing a leopard print scarf? Nothing looks out of place at this theatrical spot. Bravo to the interior designer, founder Bill Collison himself, who admits that the visionary designs are his very own picks. In a time when it seems that pared-down minimalism rules all - with exposed brick, naked bulbs and neutral colours - this place is a welcome change.

To start, was a sublime hummus on sourdough bread with butternut squash shavings (£6.25). My main was a refreshing take on the traditional Beef Wellington, taking vegetarian cuisine to new heights with a carrot, cashew nut and mushroom Wellington (£11.95). With roots as a greengrocer, Bill welcomes wholesome flourishes throughout many dishes. My guest chose a chicken and watermelon salad (£13.25), which he has raved about ever since. Think refreshing watermelon paired with chicken that had been cooked to perfection. 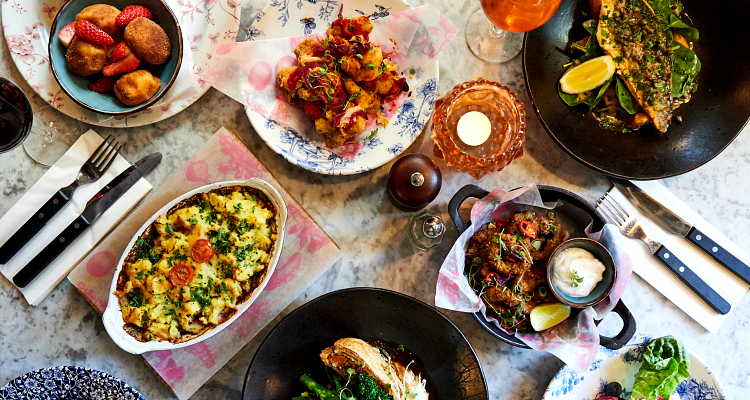 As for drinks? I’d recommend sampling one of the new cocktails, masterminded by expert mixologists. Sifting through fruity fizzes, Oreo cookie mixes and coffee-flavoured old fashioneds, I settled on the Manchester Tea Party (£8.95). A combination of gin, earl grey syrup, elderflower and cinchona bark topped off with sparkling water, it was a refreshing choice.

Dessert was an easy choice; the triple chocolate brownie (£6.50), which paired chunky morsels with melted chocolate and ice cream... it was every bit as gluttonous as I’d hoped for. Alongside a tart rhubarb and apple crumble (£6.50), this was a perfect end to our evening. 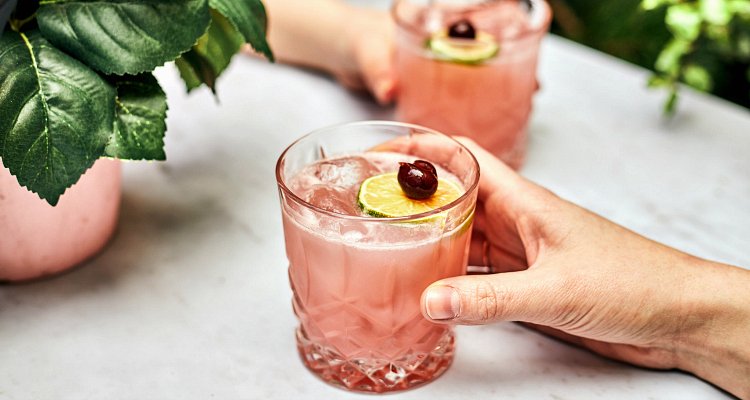 From wine served in ice buckets to gorgeous cocktails, it's all down in the details.

Of all the restaurants I've had the pleasure to review? Hands down, Bill's Spinningfields is my favourite. It's fresh, it's inviting and it's waiting to put on a show of palate-pleasing food, service with a smile and décor that can rival any art gallery’s walls. Take a trip to Bill’s for a date night, pre-theatre dining, a meal with the girls or even just an espresso martini – this place welcomes all.