A taste of the Caribbean in Leeds: #SoulOfAngostura at Vice & Virtue

Despite its growing reputation as one of Leeds' best fine dining restaurants, you’d be forgiven for walking straight past Vice and Virtue without realising; its anonymous looking black doors placed discreetly on the street corner give off speakeasy vibes.

Once you’re in, you’re met by steep stairs. The first floor is a luxuriously decorated, smallish bar, with black leather booths and an alcohol stock to rival some of the biggest venues in Leeds. The staff here know their way around ingredients, so if you don’t fancy drinks off their extensive menu, simply give them a flavour you like and they’ll create something unique for you.

For the Soul of Angostura evening, we were upstairs in the Vice and Virtue restaurant. The décor here is luxurious, but lighter and more playful than the bar; one wall is covered in flamingo wallpaper, which is pulled off without feeling tacky. We’re greeted by Daniyel Jones, Angostura’s Brand Ambassador, who is without a doubt the most charismatic man you will ever meet. He takes us through the history of Angostura rum – just five people in the world know the secret recipe - along with the history of Angostura bitters, which was originally created for medicinal reasons, and has never wavered from its first mix. Whether this means the cocktails are ailment curing or not is up for debate, but I’ll take what I can get. 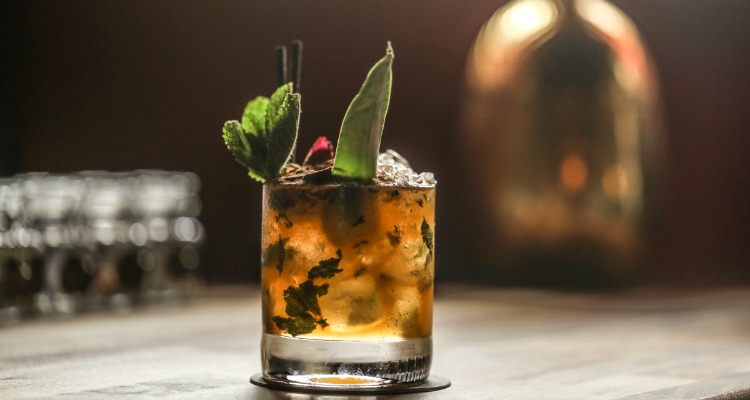 Set in the new and very sexy Vice & Virtue, #SoulofAngostura is showcasing the bitters like never before.

The Vice and Virtue x Soul of Angostura tasting menu is a three-course menu, each course paired with an Angostura-based cocktail. The menu incorporates local produce, something Vice and Virtue tend to focus on anyway, while the drinks reflect the culture of Trinidad, where Angostura is from.

The arrival cocktail is a Chapeltown Punch. Named after an area of Leeds, it’s an ode to the Chapeltown's West Indian Carnival – the longest running carnival of its kind in Europe. Containing Angostura 7yo, mango, rhubarb, passion fruit, as well as Yorkshire rose and tea, the punch is beautiful; light, and sweet without being sickly.

Once the cocktails have been drank, starters are brought out. With a background of specialist tasting menus, portions at Vice and Virtue are small; the emphasis is on quality, not quantity. We’re dished up local asparagus with salt fish dumpling, cured hen yolk and squid ink emulsion. It’s fair to say it’s a dish unlike any other I’ve ever tried; the yolk (cured in salt and sugar) is delicious, as is the squid ink; both are definitely something I’d like to try more of.

This course’s cocktail pairing is a Viced Queen’s Park Swizzle; Trinidad’s halo drink made with Angostura, syrup, line juice and bitters. It’s mixed using a swizzle stick; a wooden cocktail muddler with roots back to the original rum plantations in the West Indies. It’s a strong drink, and fairly bitter; not to my personal preference as a fan of sweeter flavours, but clearly loved by many who tried it on the evening. 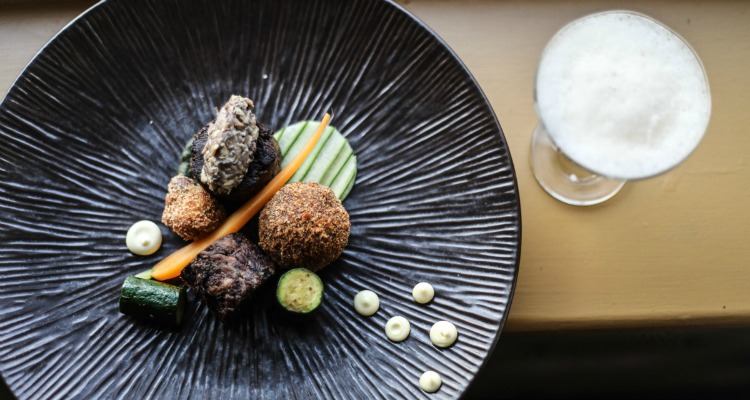 The main course was braised oxtail, with deep fried chicken hearts. It was my first experience with oxtail, and won’t be my last – my only ‘complaint’ was that I wished there was more. The chicken hearts were surprisingly nice, although an odd texture; a little springy, they seemed to ‘burst’ as you bit into them. This dish came with an Angostura New York Sour, another particularly strong cocktail with a sour base.

The final course of the evening was a dessert named the Meanwood Trail, after the ingredients foraged for in the Leeds based trail. I’m not normally a huge dessert kinda gal, but this is beautiful; delicate slices of burdock root meringue, with a refreshing honey sorbet, and wild chervil to balance out the sweetness. The final drink of the evening, the 3yo Angostura daiquiri, was sweet and rich enough to be a dessert in its own right, and as such came presented in a small glass; more like a sherry than your typical daiquiri.

The Soul of Angostura tasting menu was created for Cocktails in the City, and was available for one weekend only. However, they offer seasonal tasting menus, pre-theatre menus, and cocktail lounge menus throughout the year - all reasonably priced, for the quality and unique-ness of the ingredients used, too. Angostura rum, the star of the evening, is available at most bars, and is definitely one for rum lovers and rum passivists alike; it’s strong, but without the wince-inducing taste accompanied by some of the cheaper rums we’ve all tried before.