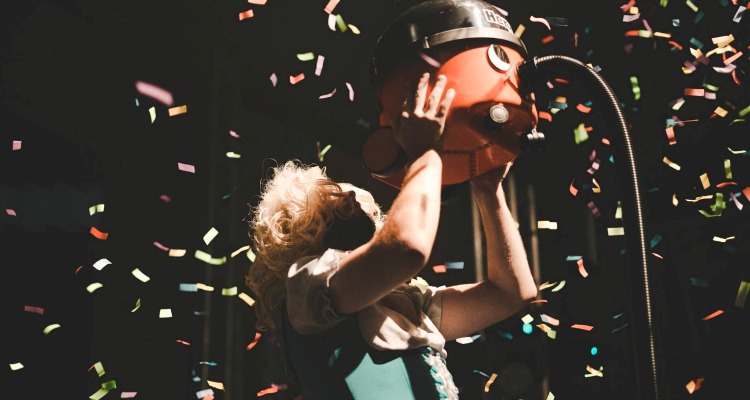 From hoovers to giant unicorns, Bongo's Bingo is taking the game to another level.

Forget blue rinses and cardigans, this bingo is a Mecca of a different kind. Brummies are flooding to Bongo's Bingo for a night of entertainment and the chance to win “CASH CASH MONEYYYYY”. The pop up event is held in a warehouse in ever-cool Digbeth. After entering and collecting the all-important book and bingo dabber, we headed in to find long tables and benches lining the room, perfect for dancing on. The excitement in the room was palpable; as soon as we arrived it’s clear that everyone is up for a laugh and ready to party. Expect to make lots of friends with the people surrounding you; you may not know them at first, but give it half an hour and I can guarantee you’ll be serenading each other to Westlife. The stage is where the main event happens, and it’s filled with screens, lasers and sparkles.

Hosted by the infamous Jonny Bongo and his “glamorous assistants” (aka men, wearing dresses, popping out some top class dance moves), it’s a night of utter madness. Rounds of bingo are interspersed with audience challenges, pop anthems and lots of tabletop dancing. Of course, being bingo there are lots of chances to win prizes, ranging from the downright ridiculous (think giant fluffy unicorn toys, Coco Pops and a cardboard cut out of The Rock) up to a top prize of £500 cash.

I have to admit I was a bit cynical before going, but the vibe here is infectious and a few rounds in I was on my chair singing along and having the time of my life. The only downside? I’m gutted I didn’t win the Henry Hoover

Birmingham based food blogger with a big appetite. @noshandbreksbhm