You wouldn’t always come to expect such an opulent restaurant to be perched above a department store, most of us still perhaps fondly remember the BHS cafe and Full English for a fiver, but Harvey Nichols is no beige meeting place for those buying cheap vests and coffee. As the lift opens, you have a choice, left into the inviting glow of the bar, or right into the casual yet sleek dining room. Greeted warmly at reception, we’re encouraged to leave coats with them - not having to battle with wet jackets on chairbacks is a welcome treat in the depths of a cold February night. 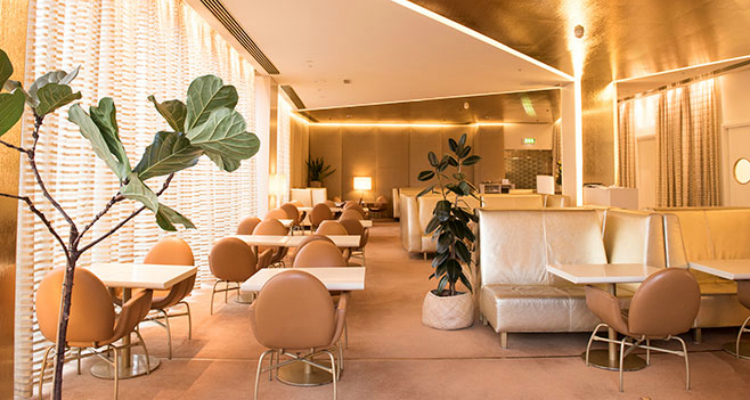 Harvey Nicks' luxe restaurant has none of the stuffiness you expect from high-end dining.

As we were led to our table we were struck by how comfortable everything looked. As frequent restaurant flyers, there is a certain expectation with high-class eating that they can be a little stuffy and uncomfortable, but Harvey Nichols doesn’t entertain that notion. Rich, sink-able brown, leather seats encourage you to relax and absorb your surroundings, which from our window seat were beautiful. Views across Cabot Circus lit by string lights really added to the sense of luxe - that and the large glass of prosecco we ordered.

Harvey Nichols runs a ridiculously good value set menu through the week that offers a seasonal 3 courses and a cocktail for £23. As we dined with a vegetarian, we were presented with a separate set menu, which was a wonderful touch -  hands up all the plant-eaters who've always had one choice per course and are a bit sick of it?

We kicked off with a potato and leek soup and a crisp ham hock terrine, plus a load of fresh bread and butter for us to nibble on whilst we waited. A generous serving of smooth and creamy soup came topped with plenty of fried potato straws providing a fun textural change, alongside a fresh leek flavour that helped to warm chilled bones. The ham hock arrived toasty and crisp on a bed of pickled pear, crunchy parsnip and a sweet parsnip puree that would have been just as good smeared on the aforementioned bread. 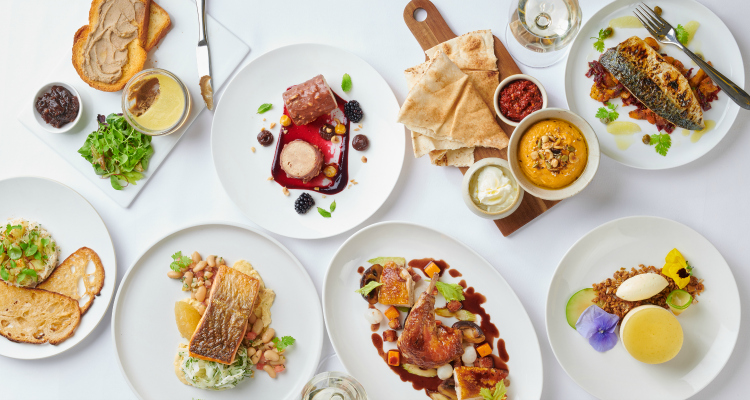 Masters of all things luxe, they're treating you in everything from the food to the fizz.

For main we went for the venison meatballs and a soft poached duck egg on artichokes. The meatballs were full of flavour and juice despite venison being a traditionally lean meat. They sat atop a puddle of buttery polenta and cavelo nero that came together in a marriage of cold-busting comfort. The star of the show, however, was the duck egg. The test of any kitchen is a sun-yellow yolk running with abandon over the plate and they nailed it. Beneath it, some of the best uses for artichokes were in force; a gratin and a dauphinoise, which added to the savouriness of the egg itself, with a few wild mushrooms to tie it all together.

A break was sought and glasses topped up as we got ready for desserts: one banana parfait and one pannacotta. Both were gratefully received, the parfait packed with banana flavour, a peanut butter mousse and chocolate creating a luxurious, childlike pudding but with the finesse you’d hope for at the grown-ups table. The pannacotta arrived perfectly set with the much-loved wobble tested and giggled at. Poached rhubarb provided a tangy slice through the cream, quickly arrested with the addition of a sweet white chocolate crumb. 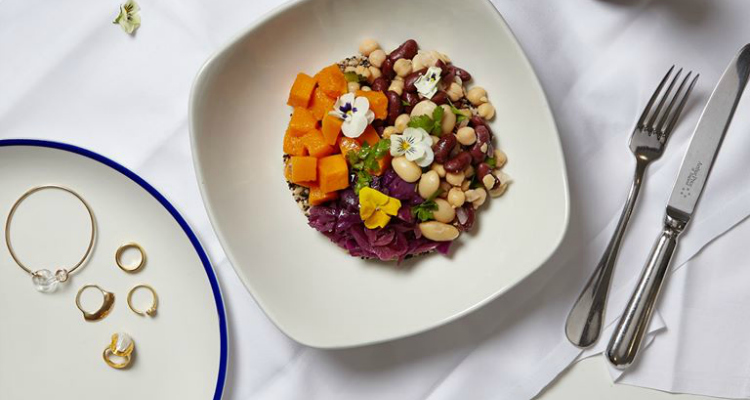 With plenty of veggie and vegan options there's something for everyone in their slick brasserie.

We were very well looked after at Harvey Nichols, with attentive but not overbearing staff, beautifully presented food and surrounds plus a view that really made the evening feel special, despite it being a Tuesday. For an affordable but decadent evening out, we absolutely recommend.