Is this London's weirdest escape room? We tried Poppa Plock for ourselves. 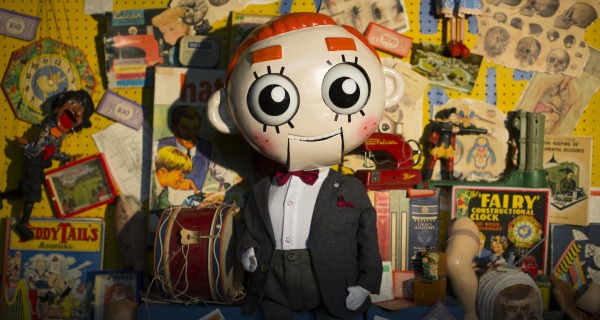 Don't let appearances fool you, this tin-chap has a sour mouth... and a sour attitude.

So far this year i've found myself crawling through air-ducts to escape zombies, been to the toilet in a giant egg and spent the weekend in a cave made of crystals; but of all the things I saw myself also doing, listening to a three foot tin-puppet shout insults at me wasn't exactly one of them. From the same 'Crystal Maze on crystal meth' team that has brought London the infamous Lady Chastity's, Handmade Mysteries have turned the escape room on its head with their latest theme, and we had to find out how.

I'm not going to give too much of the tale away, it's one you'll have to find out for yourself, but there's a few clear wins to be found at Poppa Plock's Wonky Workshop. Found atop The Depot in Islington, Poppa Plock's has torn away from the murder mystery theme of most escape rooms in the city, giving players a fun twist, that's also pretty twisted.

Taken on by four of us, it's gusto that kept us going on an adventure that would see us on our hands and knees, screaming at pipelines and getting aggressive over a Scrabble board. Not only is Poppa Plock's colourful and creative, it's full-on action from the off, asking you to think outside the box, then inside of it, then outside again. While we didn't escape, spent 60 minutes in a dizzy and had toys teasing us the full hour, it's clear that Poppa Plock's is giving escape room enthusiasts something more than a little different.

It's crude, it's rude, it's creepy and it's down right original.

Poppa Plock's Wonky Workshop is currently found at The Depot in Islington. The game is available for up to 6 players at £22/£25pp. Buy your tickets here.